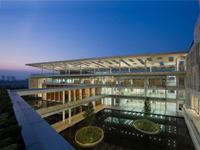 One of Perkins+Will's recent foreign projects is the Chervon International Trading Company Headquarters in Nanjing, China.

They’ve done it again. For the fourth straight year, heavyweights AECOM and Gensler have landed at the number one and two spots, respectively, on our annual Top 250 Architecture Firms list, which ranks companies according to architectural revenue in the prior year.

Our ranking is based on surveys that Dodge Data & Analytics distributed this year, from January to March, to thousands of architecture and engineering firms countrywide. Foreign companies with American offices were eligible to participate, but they could only report revenue generated by their U.S. outposts. Readers may note the absence of high-profile firms such as Foster & Partners and Gehry Partners. Our team contacted these firms but received no response.

In addition to total architecture revenue, we showcase additional data we collected about each firm, such as domestic-versus-overseas revenue and percentage of total income generated from architecture. These supplementary details can be revealing: URS Corp., for instance, derived only 6 percent of its total 2010 revenue from architecture, yet it still ranked number six on our list.

As our findings attest, the profession remains in the economic doldrums. Since climbing to $12.5 billion in 2008, architectural revenue among the top 250 firms has continued its downward slide. The recession officially ended in June 2009, but designers haven’t felt much relief. “Any anticipated recovery has not materialized,” says Gary Tulacz, manager of surveys for Dodge Data & Analytics.

While a few sectors, such as health care and higher education, are somewhat active, forecasters don’t expect the architectural market to bounce back this year. After rising into positive territory in early 2011, the Architectural Billings Index has sunk below 50 for the past two months, signaling depressed conditions. Moreover, Engineering News-Record’s Construction Industry Confidence Index—based on surveys sent to contractors, subcontractors, engineers, and architects—dropped five points in the second quarter of 2011, from 51 to 46.

For some, foreign projects are helping make up for the loss of work at home. Of the top 250 firms, 117 reported activity overseas, with international revenue totaling $1.8 billion. That said, $557.8 million of the full sum—nearly a third—was earned by AECOM, Gensler, and HOK.

Acquisitions and mergers also figure into the list. Most notably, Stantec’s ranking skyrocketed from 51 to 24, due in part to its purchase of Pennsylvania’s Burt Hill. Most likely, the publicly traded, Canada-based firm will land even higher next year, given its acquisition of California’s Anshen+Allen in late 2010. While Anshen+Allen was listed separately on our 2011 list (its rank: 105), its revenue will be folded into Stantec’s total next year. CEO Robert Gomes adds that Stantec isn’t done growing. “It will be interesting to see how we continue to move up the list,” he says. “Our goal is to be one of the top 10 firms.”