There are pivotal moments in history that we look back on in terms of “before and after.” The tragic police killing of George Floyd feels like a turning point of that magnitude—though we don’t know yet how profoundly transformative its impact will be. For our nation’s architectural community—with African Americans comprising only 2 percent of its registered professionals—the broader response has underscored the pressing need to confront inherent racism in our own industry. In the aftermath of Floyd’s death, many firms and AIA groups expressed solidarity with Back Lives Matter and vowed to make changes. What has evolved since then? It’s not too soon to ask what substantive, or concrete, measures are under way.

An essential starting place for many offices has been the unprecedented engagement in difficult conversations about racism and racial bias. “For seven years, as the global diversity director at Perkins and Will (P+W), I’ve guided our strategy and philosophy for advancing a more diverse and inclusive culture for ourselves and for the profession more broadly—but the one part that was always too difficult for people to discuss was race,” says Gabrielle Bullock, a firm principal (and one of only 478 registered, Black, female architects in the U.S.). But now that dialogue has cracked wide open.

Company-wide virtual meetings have brought together many of the 6,000 coworkers at Gensler, 1,684 at P+W, 1,200 at SOM, 411 at Kohn Pedersen Fox (KPF), 185 at Ennead, and so forth. Ongoing discussions—taking place remotely—have spanned from observations and questions to expressions of anger or pain from Black employees regarding experiences of discrimination and bias in their lives. And there’s been much focus on the pervasive nature of white privilege. “People have shared very personal stories, and I’ve heard white colleagues respond: ‘Oh, I never knew that—I had no idea.’ For a lot of people, it’s been an education,’ says Shepley Bulfinch president/CEO Carole Wedge, also chair of the AIA’s Large Firm Round Table (LFRT). More informal sessions and private, even anonymous, one-on-one talks have spun off from the big forums (which have sometimes engaged outside facilitators). “Safe space”—a “no-judgment” environment, where anyone can speak without risk of repercussion—has been crucial.

But before many of the forums took shape, across the country, something else critical happened: grassroots activism by predominantly young employees emerged and prompted change. At SOM, that catalyst was an impassioned call-to-action letter, dated June 3, from the firm’s Black/indigenous/people of color (BIPOC) community, in alliance with the National Organization of Minority Architects (NOMA).

The momentum for change is coming from the bottom up, but, to be sustainable, it has to be supported by leadership and established as core values.
—Gabrielle Bullock, Perkins + Will

SOM’s directors, who had begun discussing the national uproar among themselves, embraced the BIPOC appeal. At KPF, a similarly youthful rank-and-file campaign drew support from the highest levels, sparking the founding of KPF Public, a collaborative within the firm, seeking diversity, equity, and inclusion (DEI), both internally and through outreach—to include firm-wide education about racial injustice; expanded efforts to increase diversity and opportunity for people of color at KPF and across the industry; and the active pursuit of projects that contribute to more equitable cities. “The momentum for change is coming from the bottom up, but, to be sustainable, it has to be supported by leadership and established as core values,” says Bullock. “What feels different from the past—both inside and outside our profession—is that it’s not just Black and brown people talking about systemic racism. It’s everyone.” 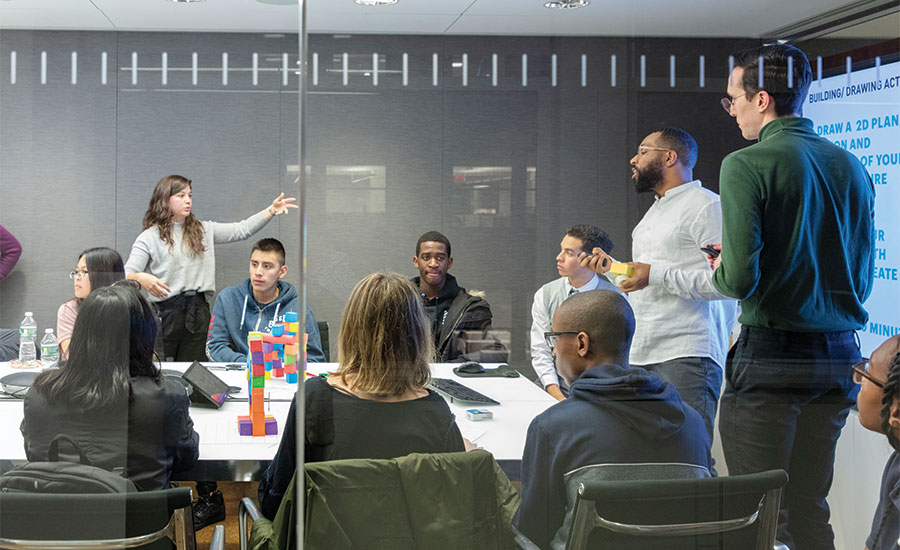 KPF is expanding work on issues of diversity and social justice, and carrying on existing efforts, such as hosting ACE Mentoring events, here in early 2020. Photo © John Chu/KPF, click to enlarge.

Cultural upheaval in the midst of a global pandemic may have played a role. “Covid seems to have peeled back a layer, making us all vulnerable,” observes Ennead partner Molly McGowan. “One benefit of having to connect on virtual platforms may be the comfort, almost fearlessness, young people have with speaking out on screens—and now Covid has opened up frank conversations among other generations as well.” As FXCollaborative (FXC) HR director Shannon Rodriguez points out, the profession’s stark reckoning “with MeToo, not so long ago, gave us all experience with uncomfortable conversations—and taught us a lot about safe space.” 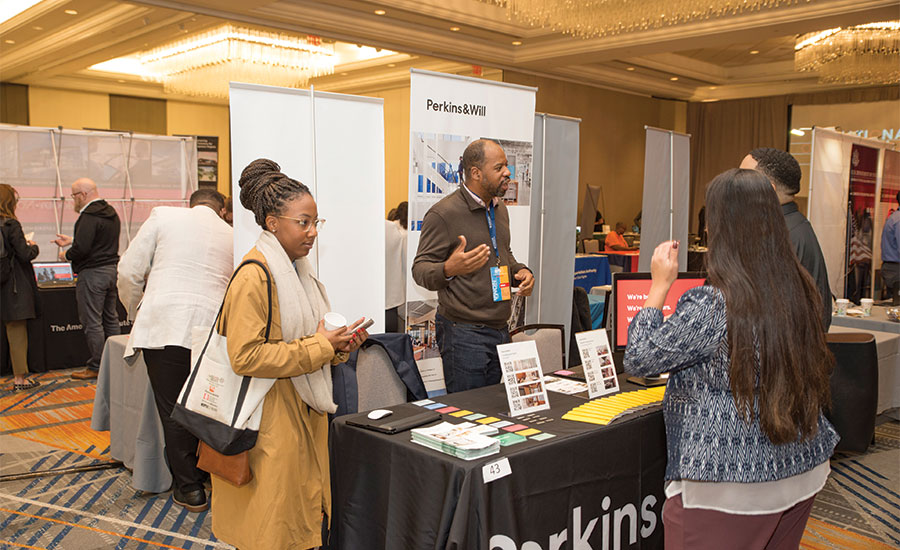 To help achieve greater diversity within the profession, NOMA held a career fair at its 2019 conference in Brooklyn. Perkins and Will was among the firms hosting a booth. Photo courtesy NOMA

While most practices interviewed for this story reported percentages of Black architects/designers exceeding the national statistic, their figures hover in the single digits, failing to reflect the full 13.4 percent of our nation’s African American population. Notable exceptions were Moody Nolan, the nation’s largest Black-owned practice (page 88), where African Americans comprise nearly 20 percent of its architectural/design staff, and—at the other end of the spectrum —two of the 12 firms approached currently employ no Black architects/designers (information shared regretfully and on condition of anonymity).

The major obstacle, many say, to achieving greater diversity in the profession is the “pipeline” challenge—the shortage of African Americans pursuing careers in architecture and completing the education, training, and licensure (page 87). To begin addressing this early on, outreach to schoolchildren in underserved areas is growing, with more practices joining those already engaged in mentorship programs such as ACE and those spearheaded by NOMA.

The 2030 Diversity Challenge, a collaboration between NOMA and the Large Firm Roundtable, seeks to double the number of registered Black architects to 5,000 in the next decade.

Among NOMA’s many initiatives are paid architectural internships and Project Pipeline camps that teach sixth- through 12th-grade minority students architecture’s fundamentals, with a stated mission to “empower [them] to effect change in their communities through design . . . and ultimately create more licensed Black architects.” The 2030 Diversity Challenge, a collaboration between NOMA and LFRT, seeks to double the number of registered Black architects to 5,000 in the next decade. In that spirit, many practices have committed to long-term relationships with and active recruitment from architecture schools in historically Black colleges and universities (HBCUs), as well as other programs with largely BIPOC student bodies.

To address the financial burdens of architectural education and registration, some firms have been subsidizing licensing costs. KPF and other practices have also provided tuition assistance to some employees returning to graduate school. Gensler offers a Diversity Scholarship, among other grants; and P+W joined its partner, the late Phil Freelon, in 2016, in founding a fellowship fund at Harvard’s Graduate School of Design, and is now developing a similar program for HBCUs. Meanwhile, “the 60 LFRT members have committed to donating [a total of] $50,000 annually for five years to build the NOMA Scholars Program,” says NOMA president Kimberly Dowdell, who has created frameworks for smaller firms to contribute as well. Her President’s Circle Corporate Membership initiative, for instance, beginning at the $1,000 level, “buys” donors an introductory number of hours with a DEI consultant—and, the more they give, the more hours they get.

Within practices themselves, firm culture has been undergoing scrutiny: What steps can be taken to ensure all minorities feel they belong and are not merely tokens? A number of offices are planning to enhance training and mentorship of BIPOC staff and create clear, open pathways to advancement and achievement of leadership roles. There’s also been renewed commitment to supporting diversity more broadly (which, in many practices, already includes LGBTQ , women’s, NOMA, and Latino alliances). Ennead, for example, recently added Juneteenth to its official day-off holidays, and SOM plans to honor such annual milestones as the anniversary of Whitney M. Young’s historic address to the 1968 AIA convention. Firms are also revising internal codes of ethics; making bias-awareness training mandatory; and establishing objective processes, criteria, and goals for monitoring progress.

While large firms might have deeper pockets, more modest-sized ones have also stepped forward, as did FXC in cosponsoring a Black Lives Matter street mural in Lower Manhattan, contributing to minority organizations, and matching employees’ own donations. No matter what a firm’s means may be, says Pei Cobb Freed partner Michael Bischoff, “it’s important to come together to harness the power of the collective.”

Clients and the character of work pursued have been under reconsideration as well—with increasing emphasis on projects with social purpose, including pro bono work. KPF, for example, joined an effort to assist, through design and logistical interventions, in the recovery of a marginalized part of Brooklyn’s Bedford-Stuyvesant neighborhood, a zone hard hit by Covid. “It has such urgency, you can feel the energy in the office—people really want to be involved,” says KPF president James von Klemperer. “Now the goal is to make such initiatives part of our everyday work.” Meanwhile, says Effenus Henderson, a Seattle-based consultant who is developing global standards for DEI in architecture, as well as other industries, “clients—particularly governments or universities—are increasingly demanding a level of diversity, equity, and inclusion from their architects. It’s being built into the bidding process.”

This summer, several practices drafted action plans—some as internal working documents, others as more public statements—including Gensler’s five-point “Strategy to Fight Racism” and SOM’s 34-point commitment. Though firm-specific, the manifestos share similar goals. “Ultimately, the change must be embedded in our industry, the way environmental sustainability has been,” says Wedge. “It has to be a total, integral, and long-term commitment.”

In the hard work ahead, the ongoing conversation will need to produce sustained action and a true sea change. Many remain, as Bullock describes herself, “pessimistically optimistic . . . but hopeful.” Recently, reflecting on the words of late civil rights leader John Lewis, she said, “Two of his sayings really stuck with me: ‘Find a way to get in the way’ and ‘Get into good trouble.’ In other words, we can’t just sit on our laurels, it’s not someone else’s problem to solve—it’s incumbent on all of us. And it’s going to be messy, and it’s going to be difficult. But, if not now, when?”