Six years ago, in a remarkable display of how far a determined architect can guide a client, Jennifer Luce decided that the Mingei International Museum, a San Diego institution that collects and displays folk art from around the world, needed a top-to-bottom renovation—and then persuaded its leaders to spend some $55 million on the project. The museum’s portion of a Spanish Colonial–style building in the city’s 1,200-acre Balboa Park had become “tattered,” Luce says, and “did not represent the Mingei’s values of craft, material, and detail.” 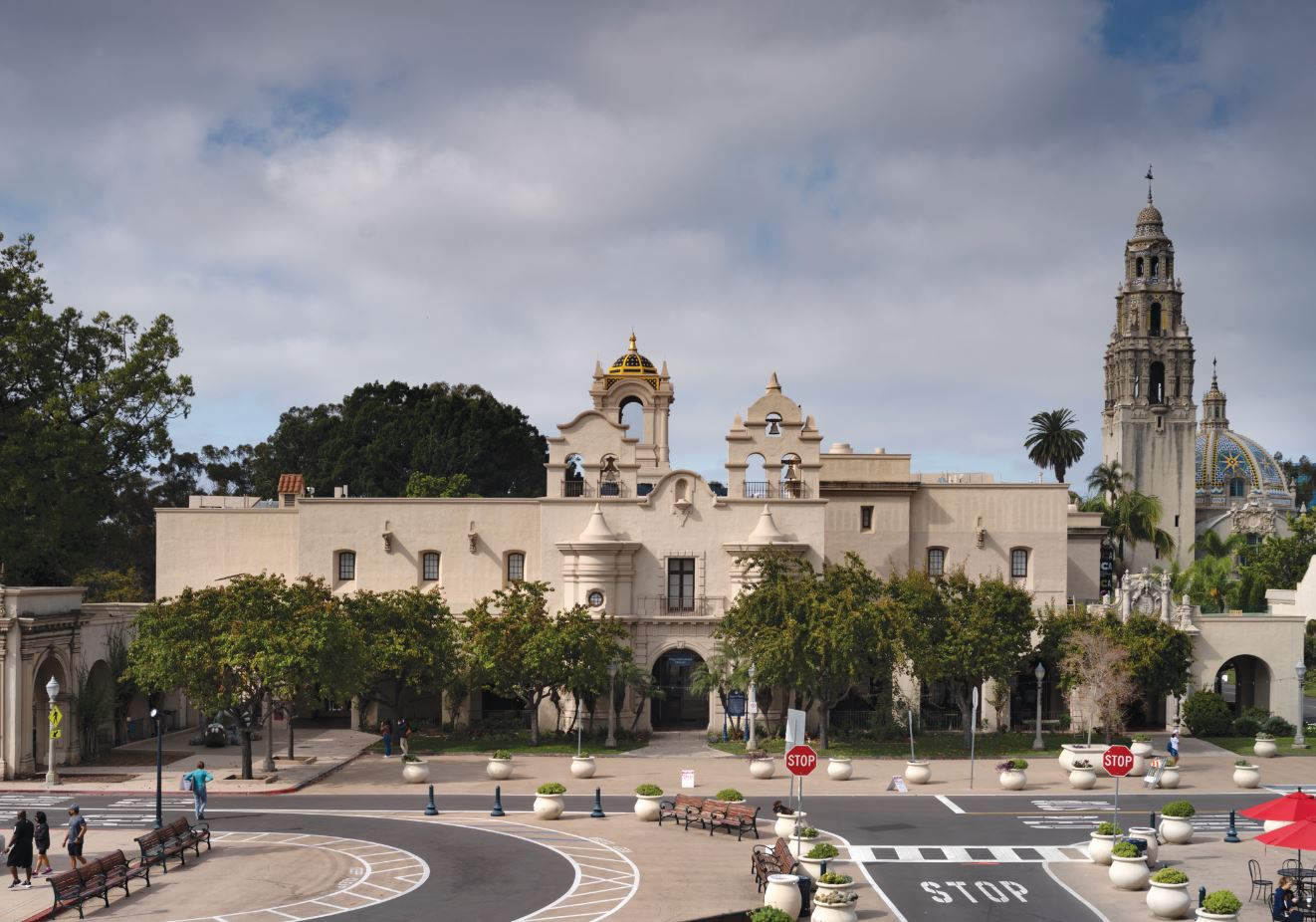 The museum’s longtime director, Robert Sidner, was hoping to make incremental improvements to the building (a vestige of the city’s 1915–16 Panama-California Exposition, repurposed for the 1935–36 California Pacific International Exposition), which it shares with the San Diego Art Institute and rehearsal facilities for the Old Globe Theatre. In 2015, he issued an RFP limited to a dozen modest upgrades. After interviewing 10 other firms, the board of the Mingei (its name a Japanese neologism for folk craft) chose Luce. The founder of Luce et Studio Architects, the architect is known for buildings that are resolutely modern but dependent on a high level of craft. 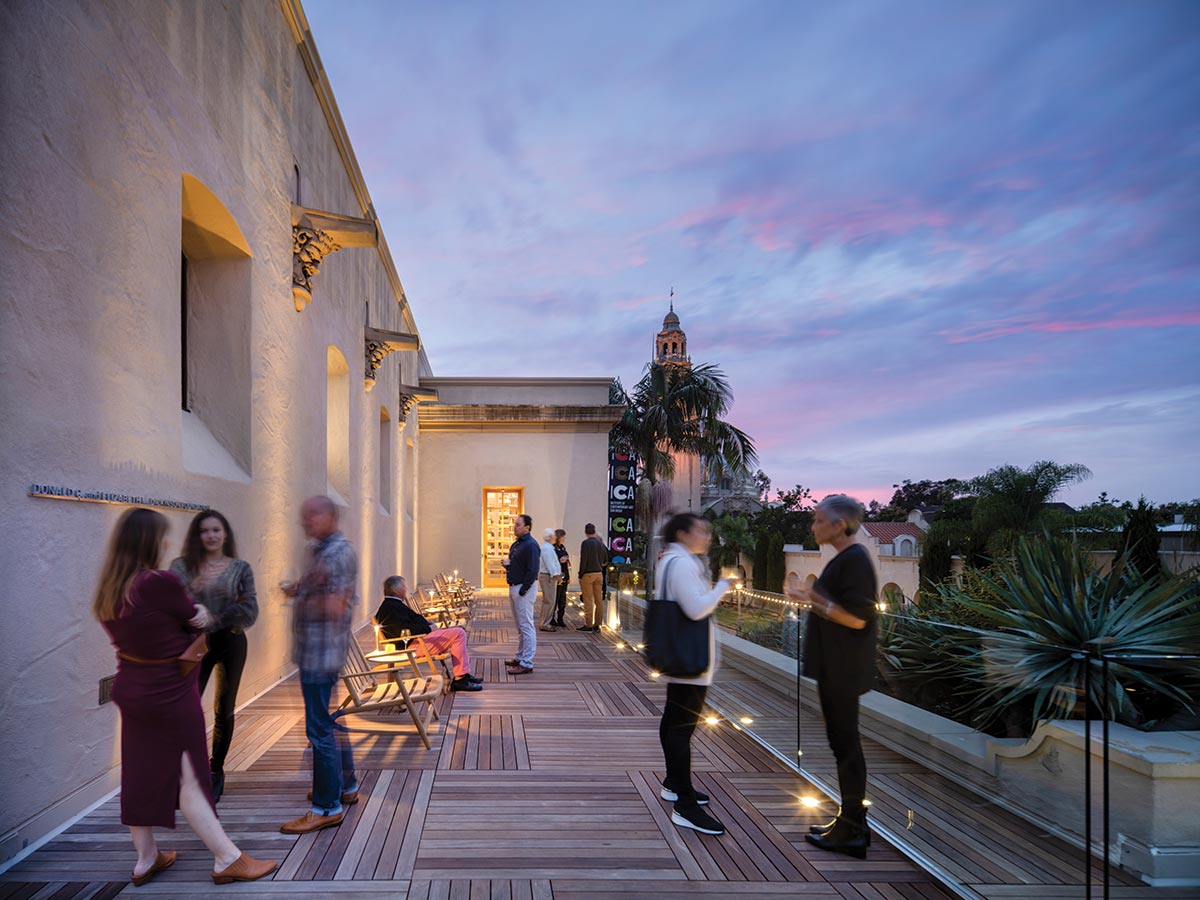 Once hired, Luce and her team spent five months talking with the institution’s staff, “asking what was working, what wasn’t, and what each one’s dreams for the museum were,” says Sidner. After that, he recounts, the team challenged the board to drop the idea of a dozen discrete projects in favor of a comprehensive renovation to transform how the museum functions and presents itself. Despite the increased difficulty and expense, the board gave Luce a green light. It no doubt helped that the architect, well-known in San Diego’s art and design worlds, promised to help raise money to pay for the renovation—and she did. And it also helped that a focus for Luce was to make the museum—until then a niche destination for folk art enthusiasts—more widely accessible to San Diego’s diverse population.

Because the building is within a historic district, altering its exterior was difficult. But after negotiating with the city’s Historical Resources Board, Luce was able to replace six blind arches on one facade with glass, increasing visibility from Balboa Park and inviting the public into the museum, which no longer charges for access to its ground level. She also was able to increase the museum’s square footage from 41,000 to 54,000 by enclosing an atrium, taking over a neglected bell tower, and even reducing excessive wall depth. She built a new 120-seat theater on an unused loading dock; a simple concrete box with a terrace on its roof, it added another 2,000 square feet to the building. 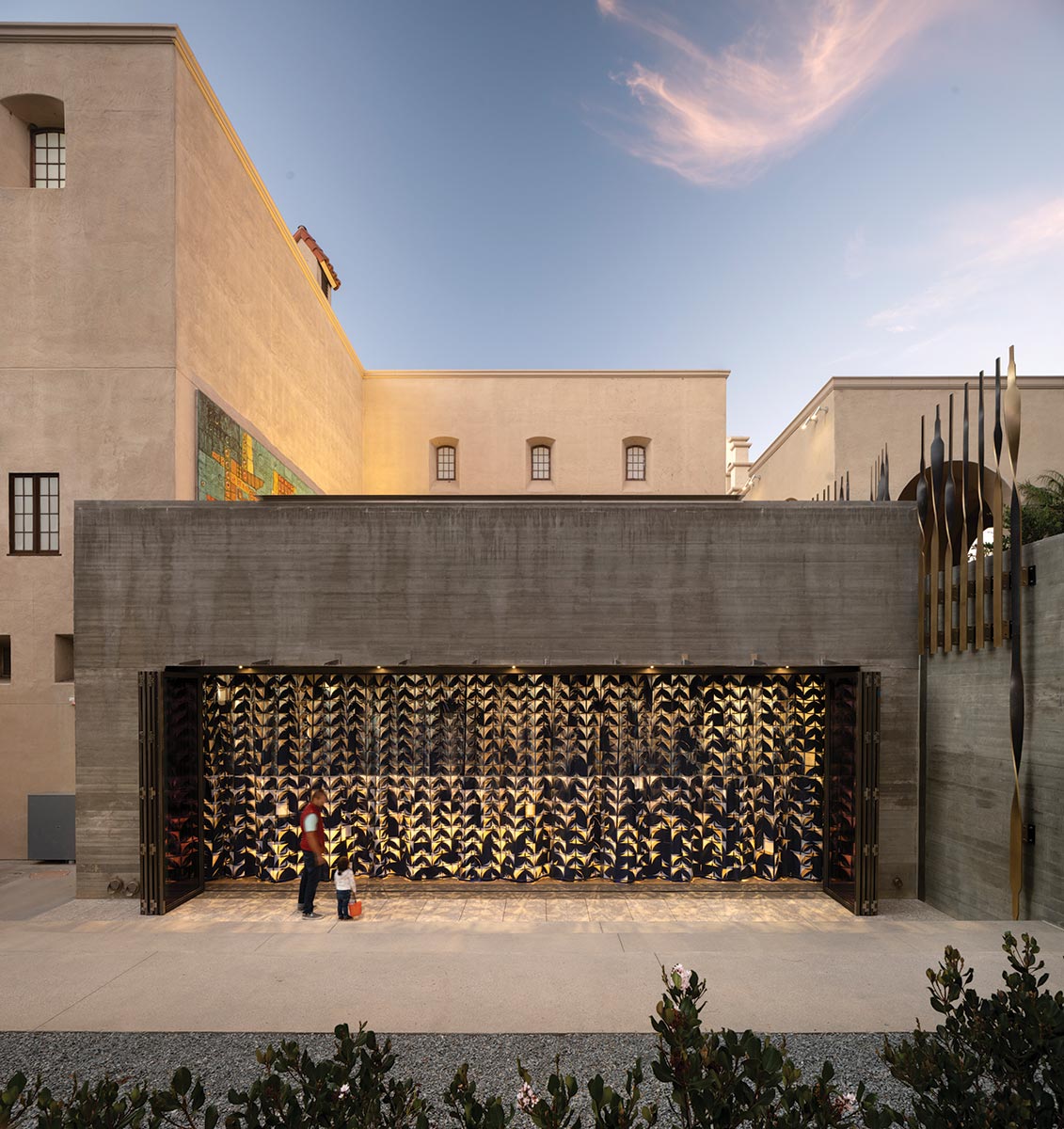 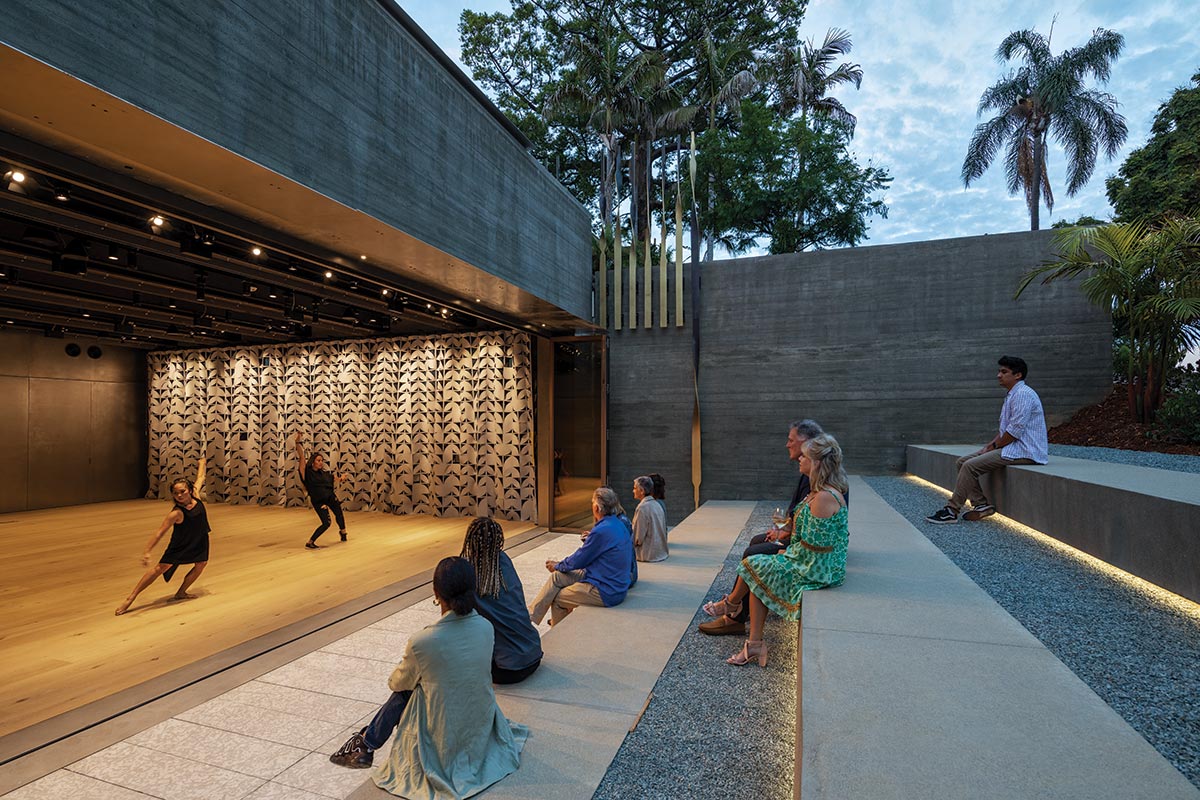 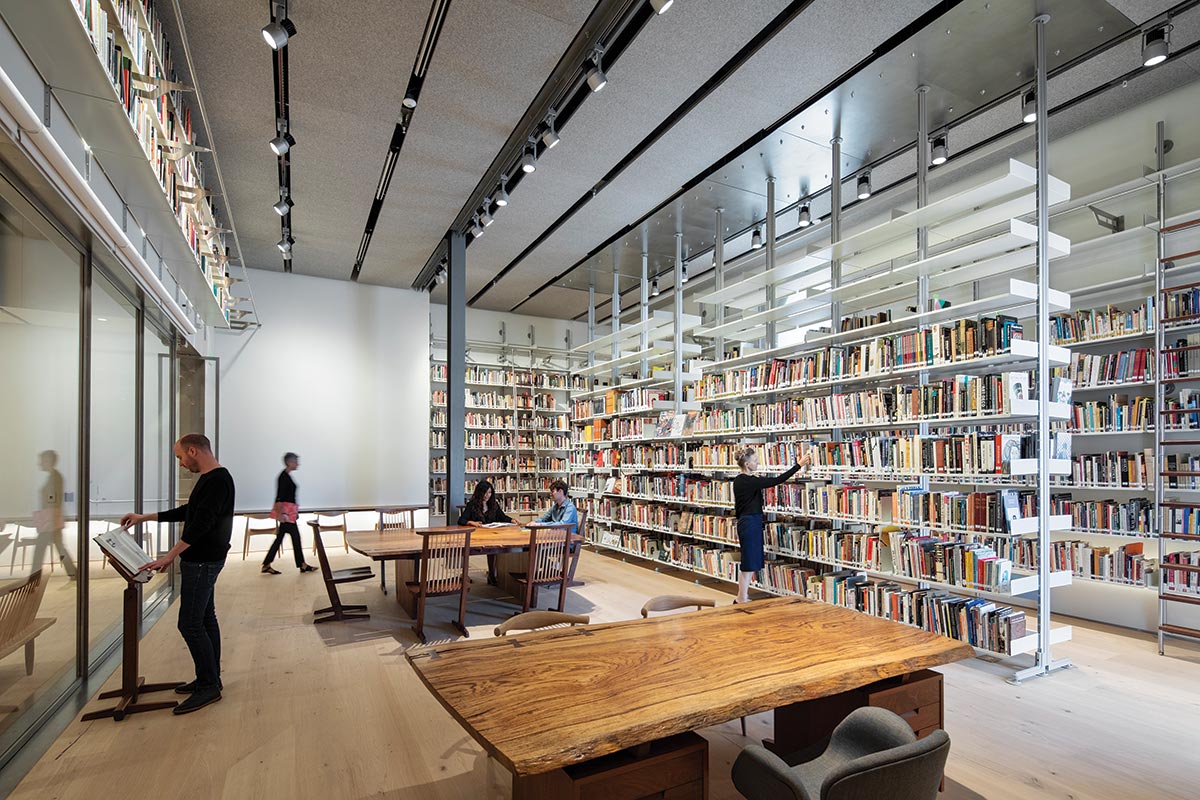 A Nakashima desk and table bring texture to the library. Photo © Paúl Rivera

The transformed ground floor contains a café, a gift shop, and a set of broad steps leading to the old bell tower, which surrounds a large Dale Chihuly sculpture and a stairway to the second floor. There, newly enlarged galleries have white walls and pale oak floors. But they are anything but generic. In a nod to the museum’s extensive origami collection, Luce created a ceiling of asymmetrical pyramidal panels made of glass-fiber-reinforced gypsum (GFRC). Exposed steel beams and columns make the history of the building palpable. And where round windows penetrate the building’s thick walls, Luce created tear-shaped recesses, bringing reminders of the stylized exterior into the museum. A glass wall separates the galleries from a spacious library, an arrangement that encourages visitors to learn more about the works on display.

Luce served not just as architect but as designer of many of the interior fittings. Hanging above the café is one of her biggest interventions: a 125-foot-long patinated stainless-steel ceiling, with perforations and raised tabs, that turns out to be a facsimile of a player piano roll. (It was fabricated by architectural metals specialist Zahner, which has done work for the likes of Frank Gehry and Zaha Hadid.) She also designed much of the café’s furniture, as well as a 40-foot-long carved bench of Vals quartz on the gallery level and the hand-twisted bronze-alloy balusters that enclose the terrace. 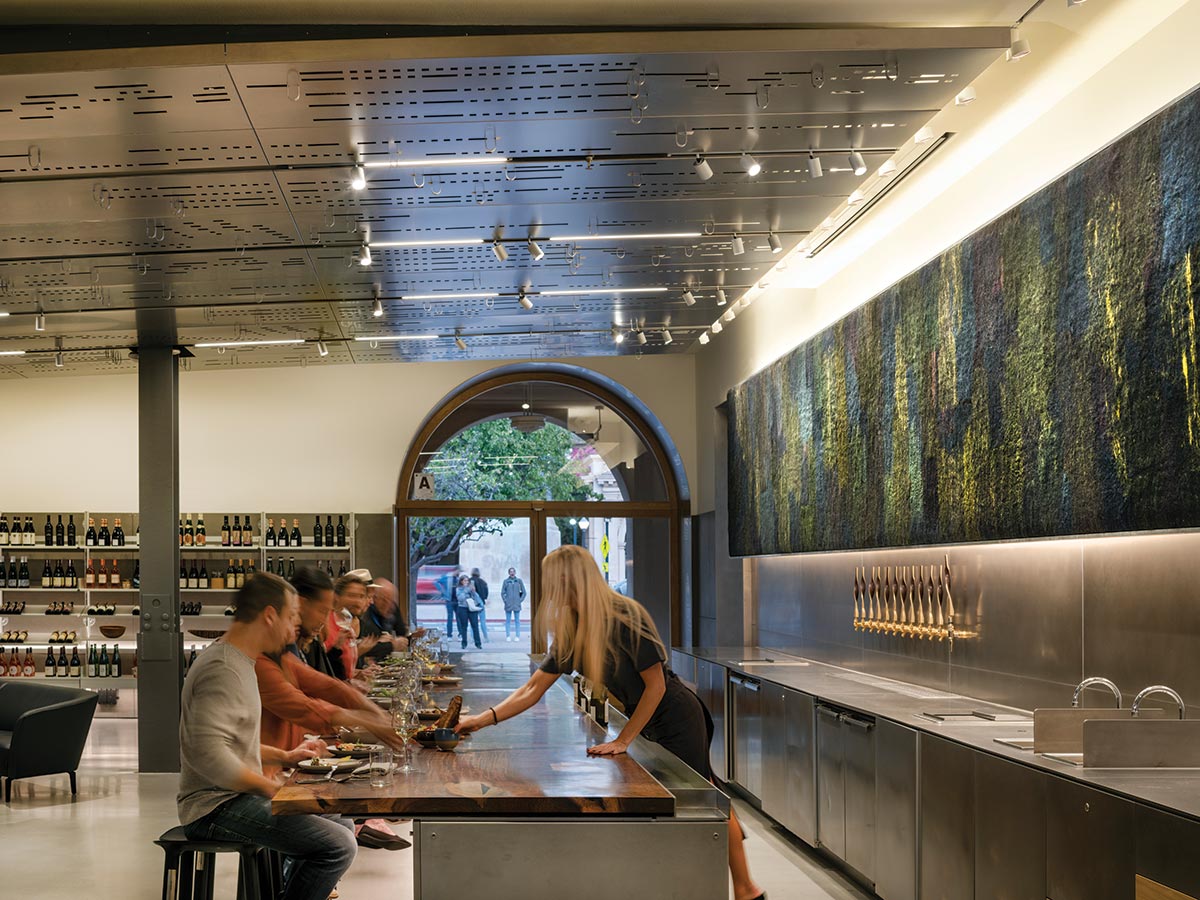 Luce designed a patinated-steel ceiling for the café, which showcases a tapestry by Claudy Jongstra. Photo © Nic Lehoux 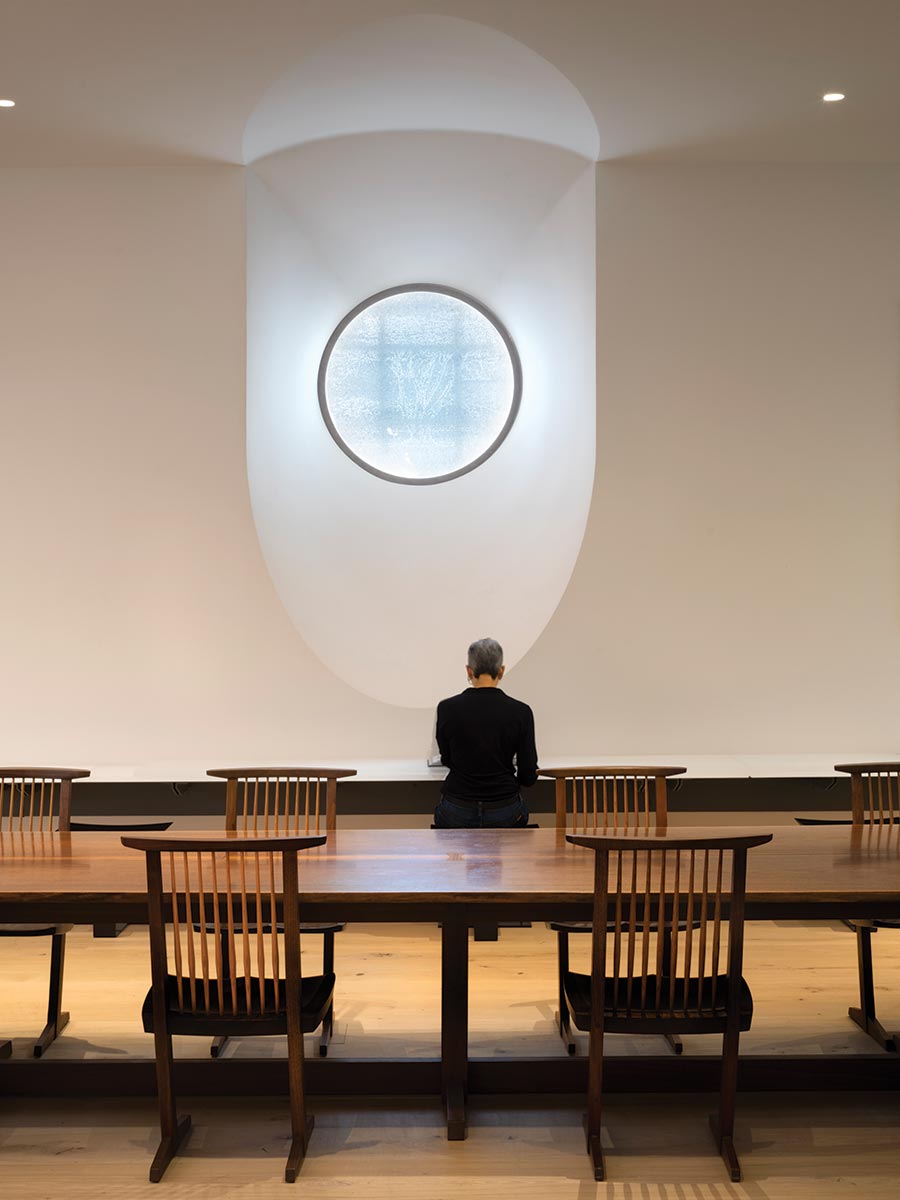 A workspace includes a carved opening around the original window and Nakashima tables and chairs. Photo © Nic Lehoux

But Luce didn’t try to design everything. Aside from incorporating pieces by such designers as George Nakashima, she and Sidner commissioned artists to create furniture and fixtures that are essentially additions to the museum’s collection. Truth and Beauty in Black, a felted-wool mural by Claudy Jongstra, hangs in the café, softening it visually and acoustically. And liquid2solid, a curtain by Christina Kim that is embroidered with light-refracting thread, serves as a room divider in the upstairs gallery space. Dutch designer Petra Blaisse layered sheets of gray and blue felt, laser cut with a pattern of abstracted jacaranda leaves, to create an eye-catching curtain for the theater. And New York architect Billie Tsien, working with her partner Tod Williams and fabricator Stephen Iino, created three movable benches of California cedar recovered from the 2018 Camp Fire conflagration. Their armrests, made from gnarly tree roots, are “useful and ugly-beautiful,” says Tsien, fulfilling her understanding of mingei. 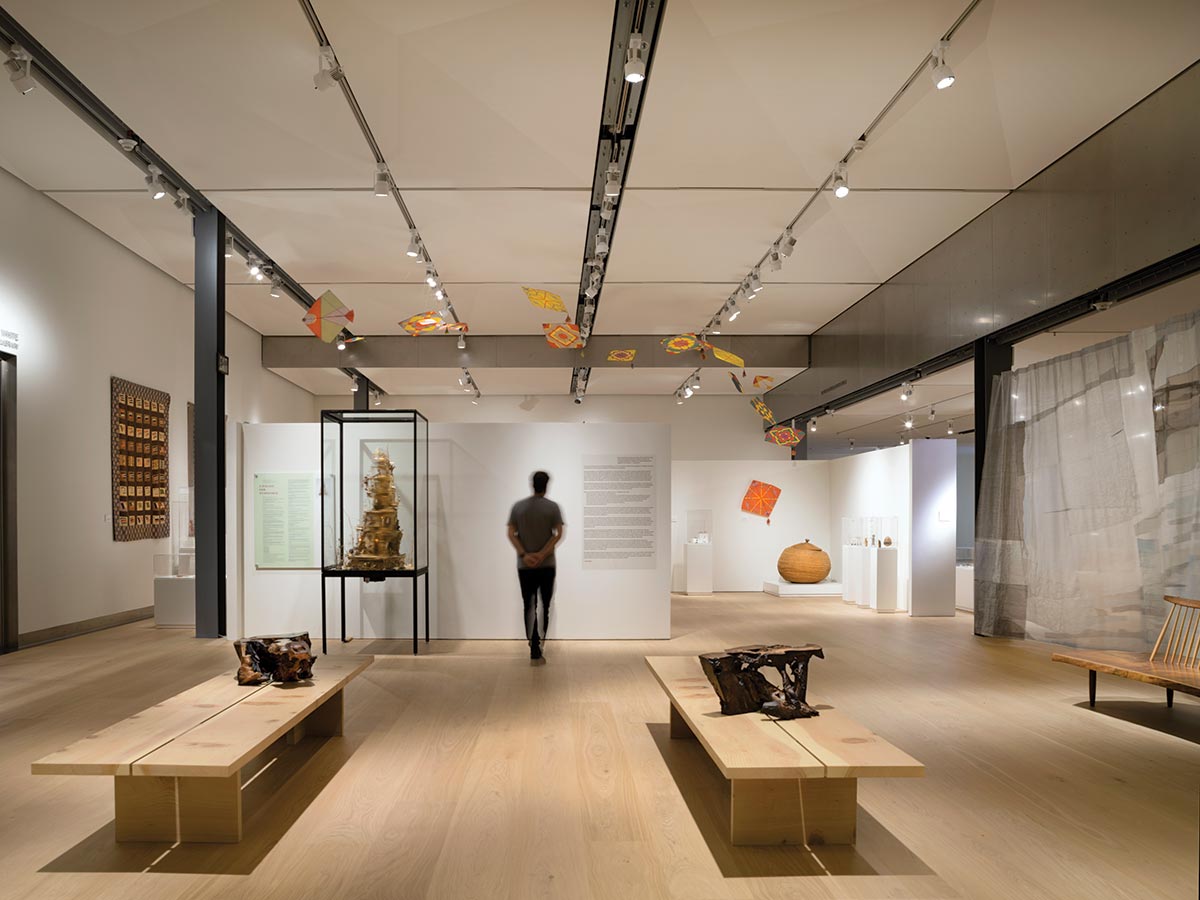 Luce says her work on the Mingei—her first museum—was all-consuming, given her roles as fundraiser, architect, and designer at a range of scales. But the thing she is most proud of, she says, “is the interaction I had with the commissioned artists. I was almost like the director of a film; that’s what an architect’s job is.” 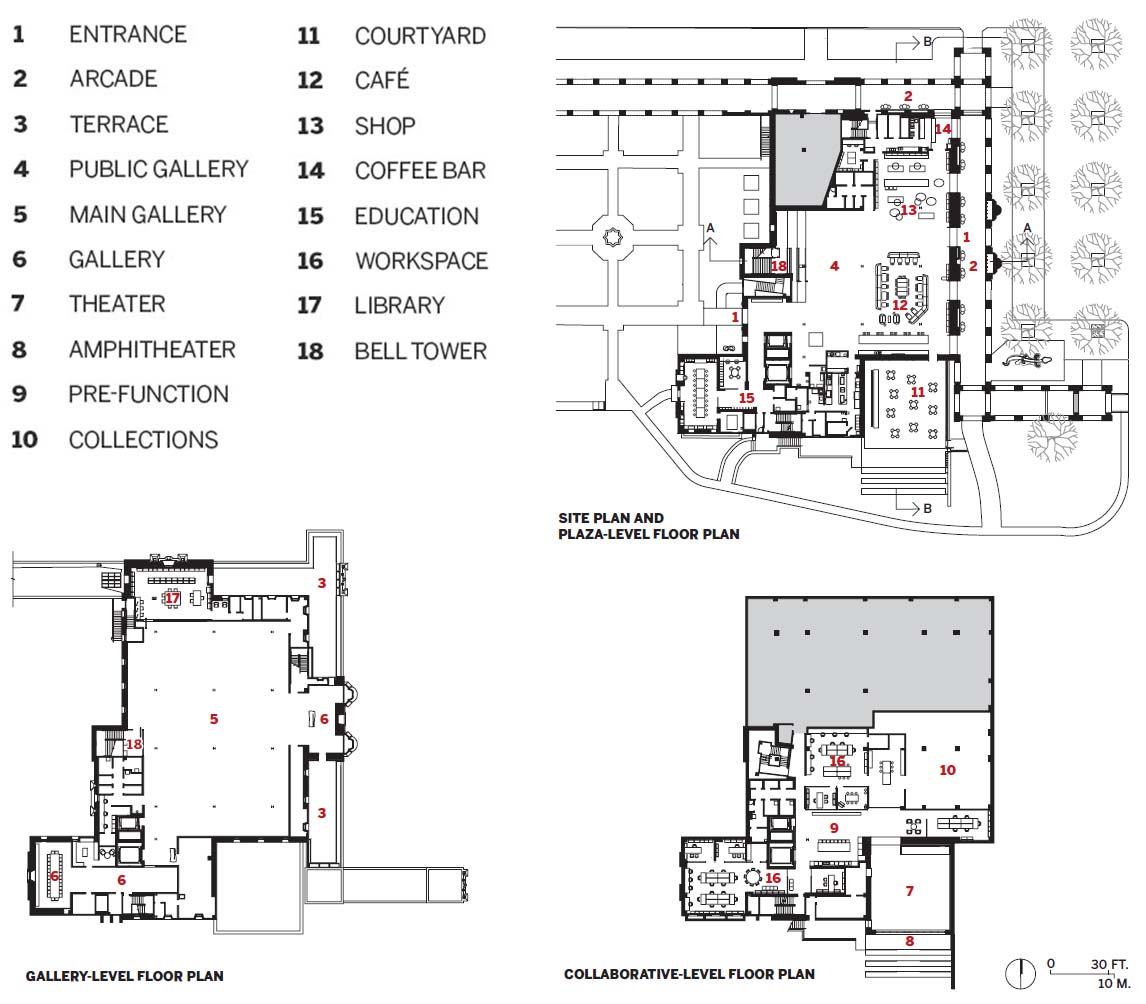