Years ago, when I first entered the Berkeley Art Museum on the University of California campus, I was stunned by the heroic volume—open, skylit, tough. Ten years later, I met the architect, Mario Ciampi (1907-2006) at a fund-raising event and asked him about the powerful space he made. He said he simply wanted a building relevant to students’ lives. To me, the museum, completed in 1970, was one of two major post-World War II structures in the East Bay (the other being Kevin Roche’s Oakland Museum of California). I never thought of it as Brutalist, as such buildings were heavily grounded with exposed structure. Ciampi’s competition-winning art museum absolutely defied gravity, particularly in seismic California, with its massive concrete volumes suspended above the street and gardens with no visible support. At its essence, it is a building that is both timeless and of its period, expressing its use in a singular way, much like Breuer’s Whitney or Wright’s Guggenheim. 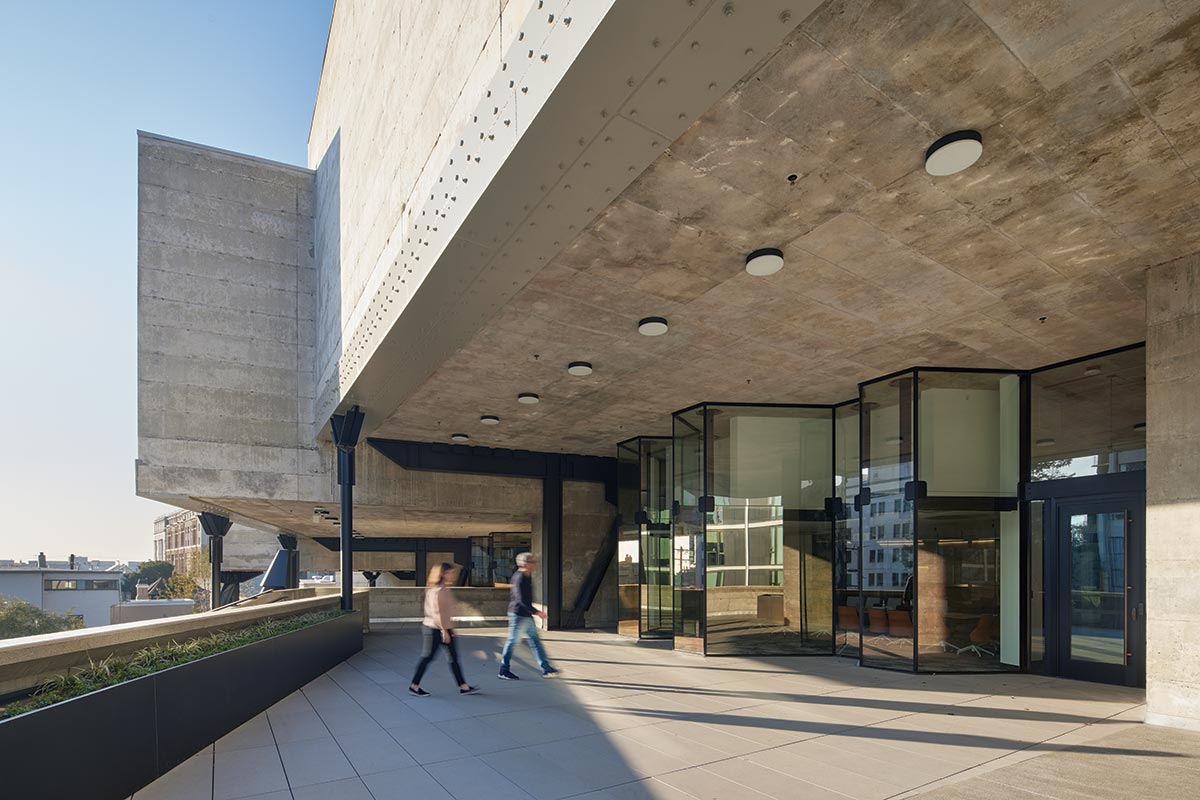 The exterior of the the building remains largely untouched, except for a glass addition that seems to slide out from under a cantilever (top), and steel bracing (above), some of which was erected two decades ago. Photo © Bruce Damonte, click to enlarge.

As contemporary art changed, the building could not. It was not flexible enough for finer-scaled art, video, sound, and other contemporary installations. Unfortunately, but necessarily, UC Berkeley abandoned the structure and relocated the museum a few years ago. Struggling with how to save the iconic building and avoid its demolition, the university found a visionary donor to underwrite its conversion to a new use: an innovation center for scientific research. While no longer an arts building or even a public one, the Bakar BioEnginuity Hub, named after Barbara Bass Bakar (a leading Bay Area philanthropist in the arts, education, and health care), is assuredly aspirational. MBH Architects was commissioned to rehabilitate the building to become a flagship for innovation, encouraging young researchers to dream big and find the next wave of breakthroughs where life sciences and physical sciences converge.

The task of retrofitting such a singular landmark is very difficult. I was asked a decade ago to renovate and expand Roche’s Oakland Museum of California, which is of the same era. We added a series of lightweight stainless-steel structures for galleries and enclosures as a counterpoint to the strong concrete composition, restricting our intervention to one new material with related but reductive forms. It was challenging, but at least we were working with a museum that remains a museum. Changing a use which is specifically and poetically expressed is a tall order.

The larger question is if the new use can be accommodated without ruining the essence of that expression. Utilitarian buildings have often been converted to art—Dia Beacon in upstate New York, the Centquatre in Paris, the Matadero in Madrid, etc. But can we turn the dial the other way? Can the unique expression of an art museum, over time, begin to speak to future generations about the exciting scientific progress occurring within its walls and become synonymous with technological discovery? 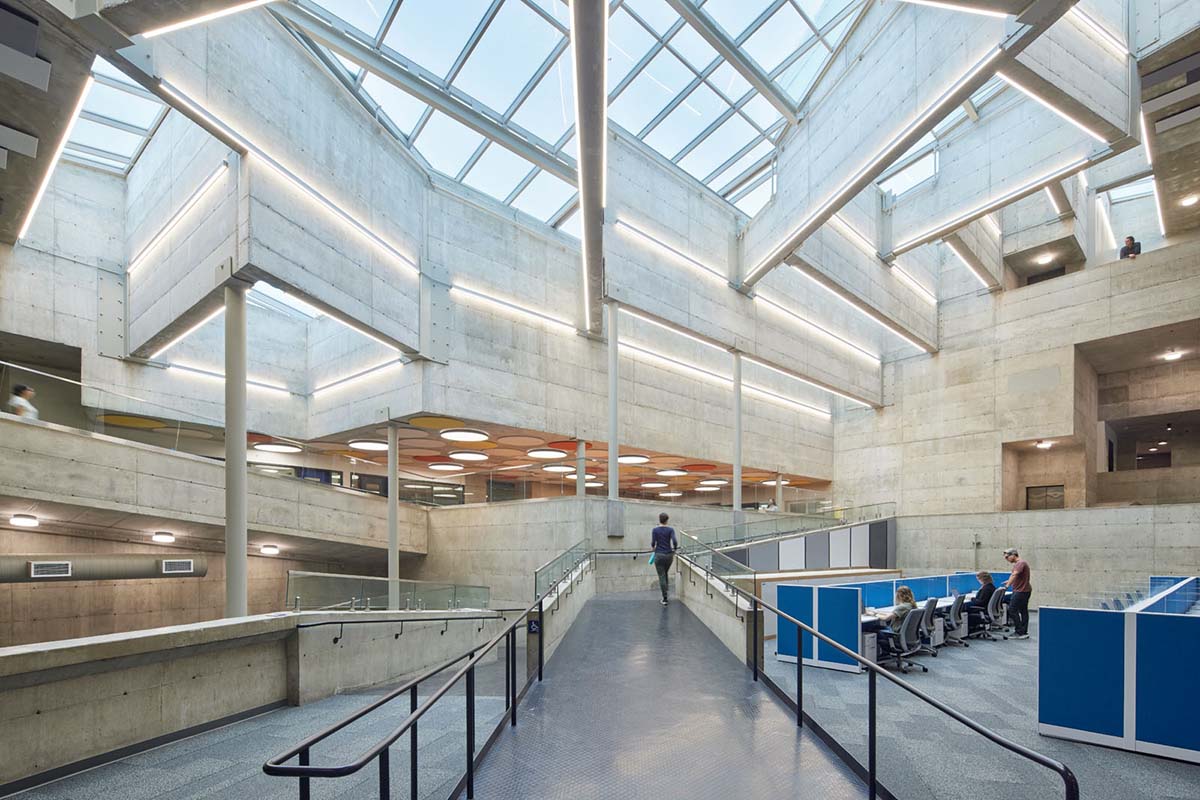 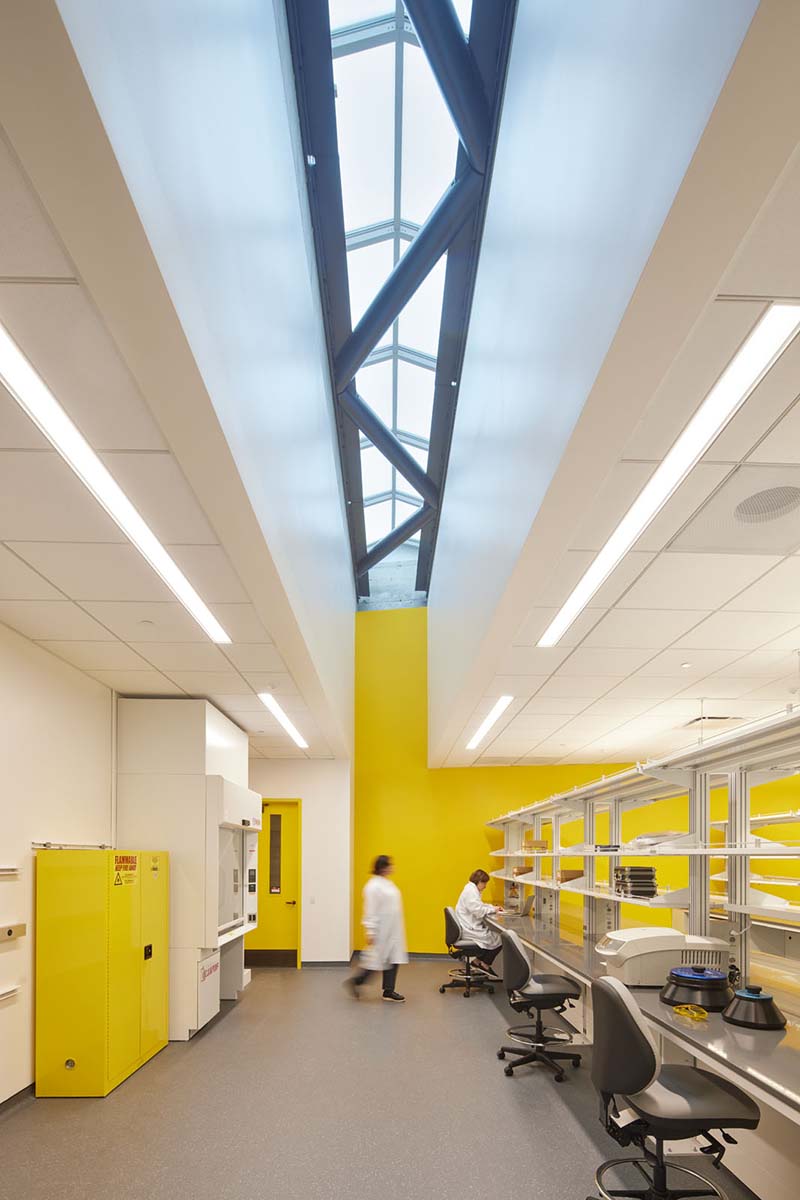 Entering the BioEnginuity Hub, one realizes immediately that the galleries for viewing art are gone and are now filled with workspace-system furniture. Ramps that once drew the public through the dramatic atrium now connect researchers in glassed-in lab spaces. Science and specificity have replaced art and abstraction. Because further space was needed, MBH Architects designed a glass addition on the north facade that appears to subtly slide out from under the lowest concrete gallery volume. The existing cast concrete of the building’s exterior is largely untouched. Forell Elsesser Structural Engineers added seismic steel bracing on the side and rear in 2001, and further strengthened the building as part of this current project. These frames are widely distributed in a thoughtful and organized manner, difficult to do in a building as complex as this. While the exterior changes exhibit the respect one expects to see, where one can differ, even question the lack of restraint, is regarding the interior changes. Abundant color (blue, orange, and yellow) now adorns the walls and workstations, much as ceiling panels in multiple shades of gray are attached to the underside of the concrete tiers. These randomized color elements throughout attempt to lend energy to the new use but conspire instead to fight the authority of the original incarnation as a museum. Fortunately, these materials, colors, and patterns are easily reversible over time. More importantly, the structure has been strengthened and preserved.

The bold atrium of the former museum (1) is now filled with workstations (2). Glass-enclosed labs (3) have been inserted within the muscular structure. Photos © Bruce Damonte 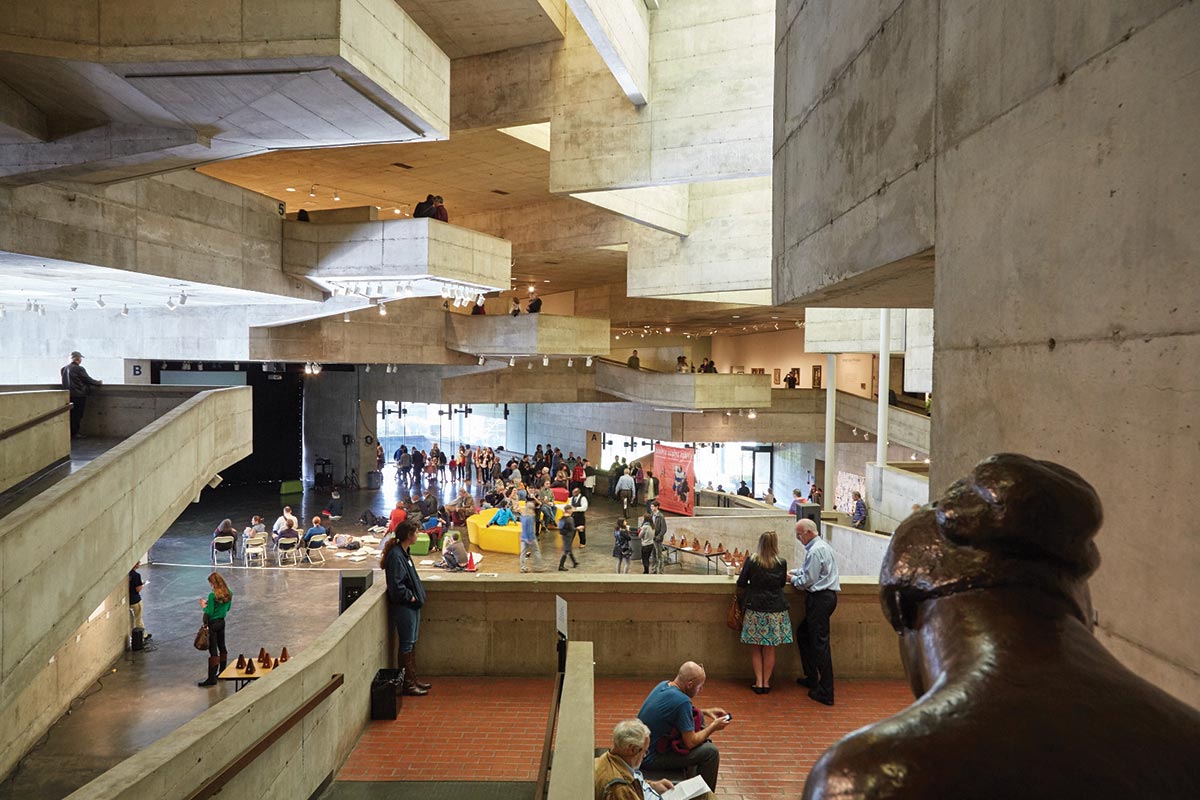 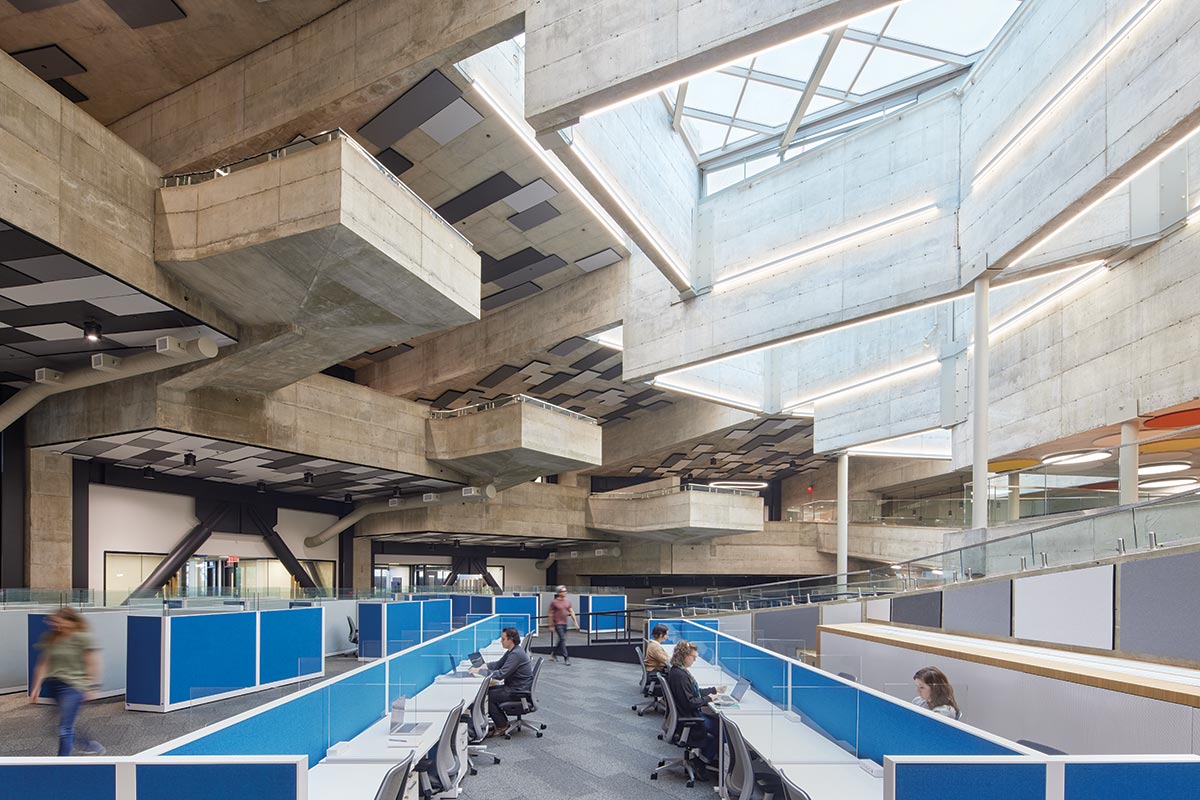 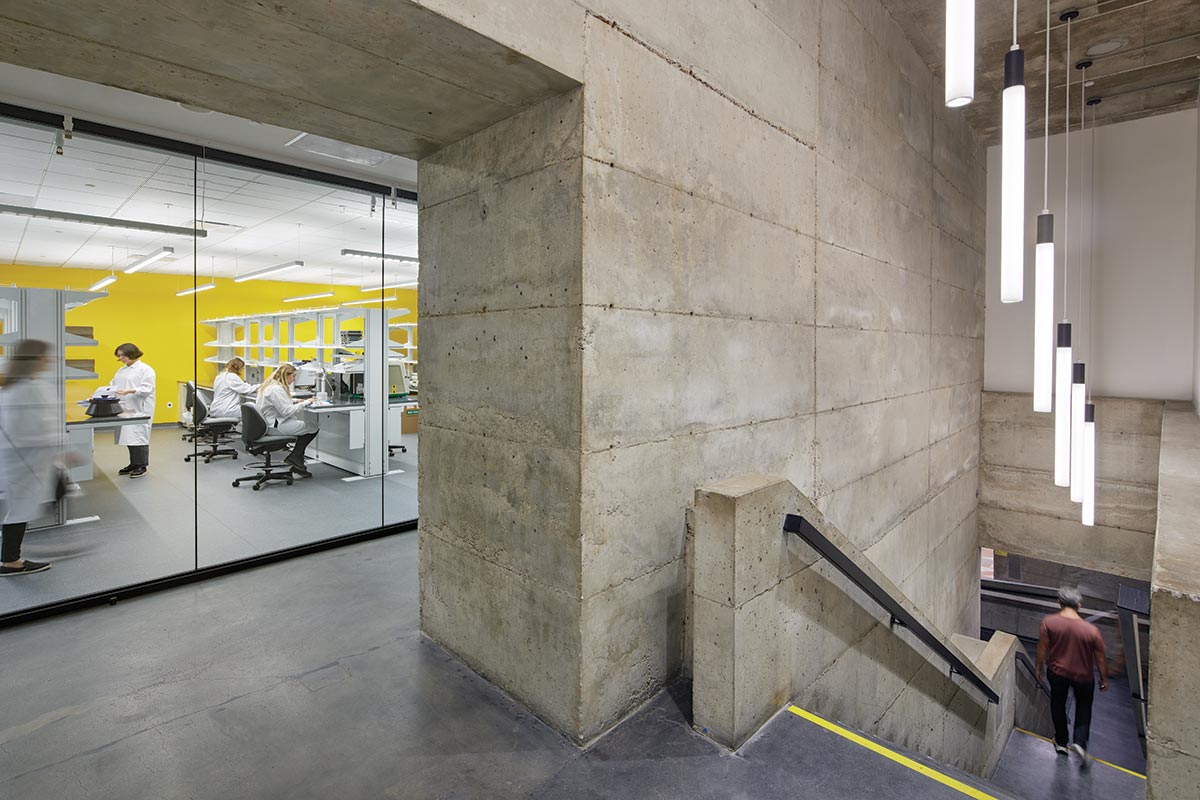 The building never had street-level transparency. As a public art museum, it was typical of its era (again, the Whitney or the Guggenheim come to mind). It expressed the realm of idealism because, sculpturally, it steps up to the skies, not because the public could readily see the art within. It is easy to lament the loss of a public use. But seeing the building nearly ready to be reoccupied, one realizes the great quality embedded in this reuse, striking a crucial note perhaps more important than simply having the public within: it is the sense of hope, I believe, that has been, and remains, embodied in Ciampi’s masterpiece. That sense of hope is alive and well.

Of course, a fully successful conversion of this building will take time. The convergence of the cutting-edge life and physical sciences explored within must become synonymous with the 50-year-old structure. That is because, like all strong works of architecture, the museum was much more than ascending tiers of concrete; it was a manifestation of aspiration. It was about offering art in exchange for destruction, beauty in exchange for war—the central theme of UC Berkeley in the 1960’s. We will soon see a bold future through the eyes of Bakar Labs’ researchers, those seeking to address the challenges currently facing our world. And one thinks of geniuses who crossed disciplines—John Coltrane, for example, who late in life became absorbed in Einstein’s theory of relativity, searching for the common ground traversed by art and science. This building, in time, may well find its sculptural form perceived as resonant with creative thought and tireless dedication. If Ciampi were still with us, he would be smiling. His building, having been threatened and put aside, is now moving forward, once again, into relevance. 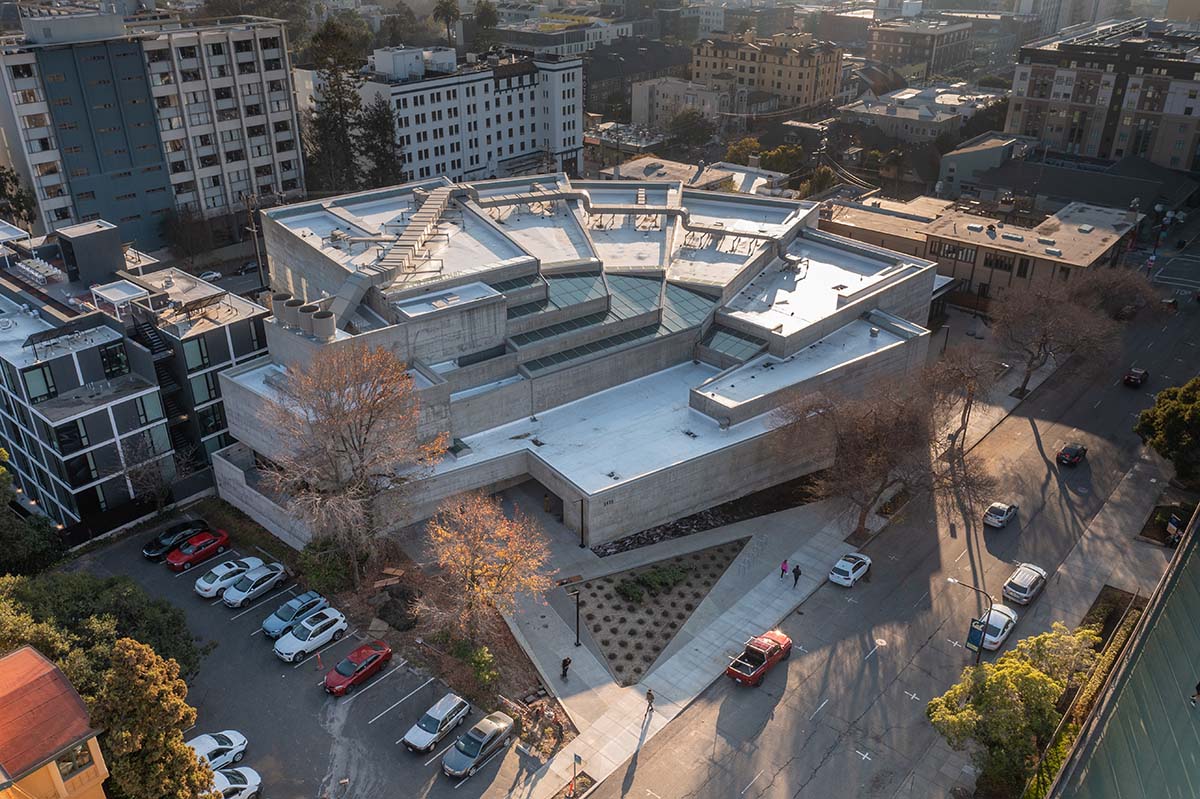 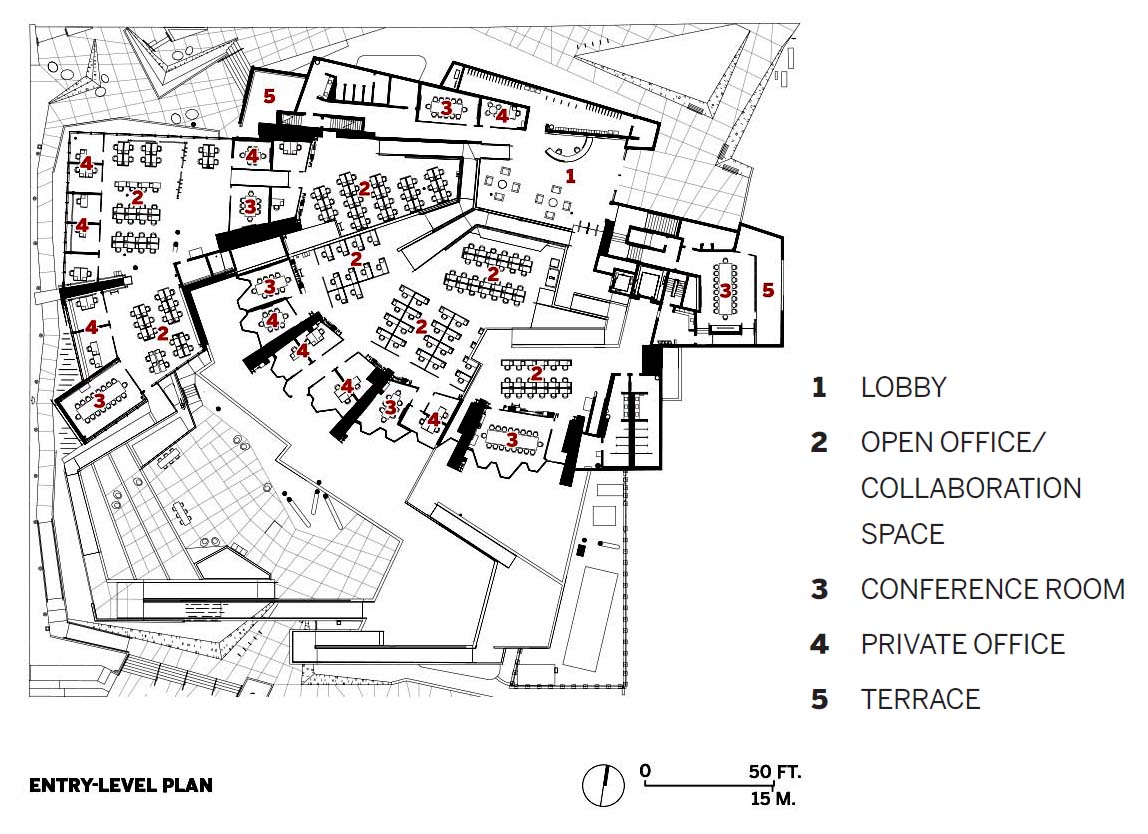 Client:
Bakar Labs in conjunction with University of California, Berkeley