Almost two decades after Columbia University first proposed a controversial expansion into the West Harlem neighborhood of Manhattanville, the Ivy League institution has opened two buildings for its business school on the 17-acre satellite campus. The completion of these latest Manhattanville structures—Henry R. Kravis Hall and David Geffen Hall, both designed by Diller Scofidio + Renfro (DS+R) in collaboration with FXCollaborative—marks the completion of the first third of an ambitious plan for a 6.8 million-square-foot multi-use academic hub. 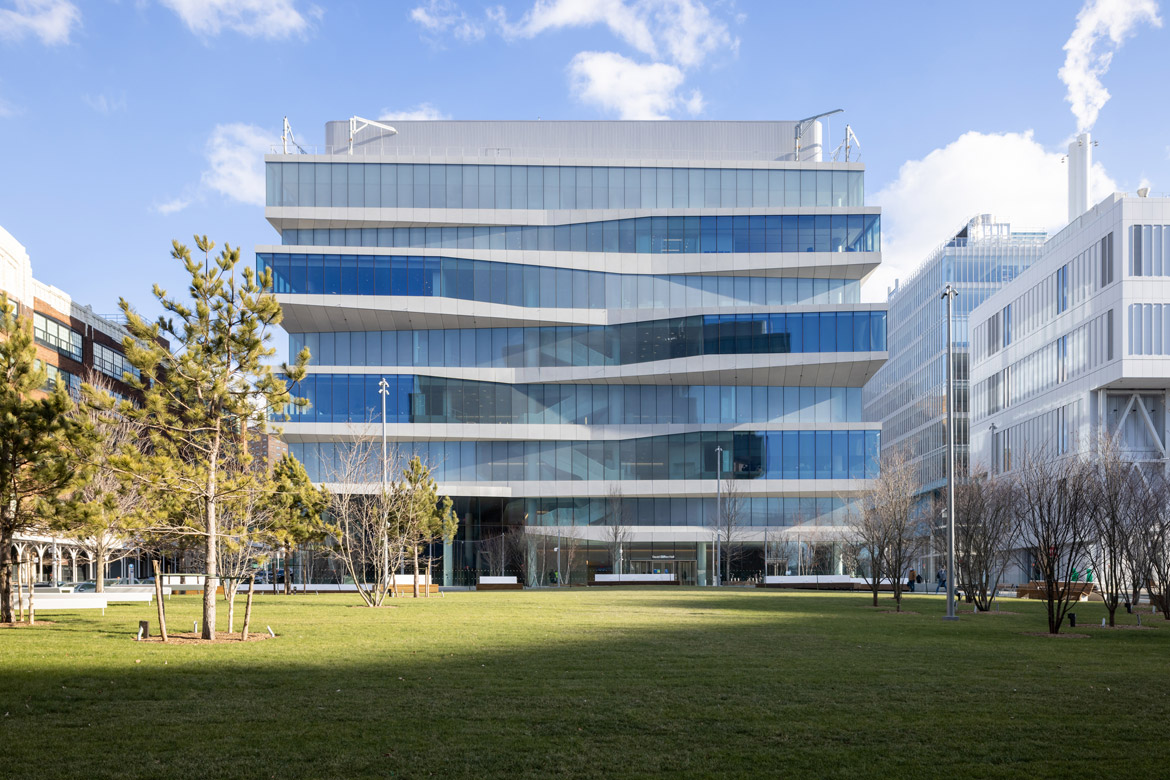 DS+R partner Elizabeth Diller refers to the firm’s pair of buildings, which face each other across a landscaped square by James Corner Field Operations, as fraternal twins. The 11-story Kravis and the eight-story Geffen, which together provide nearly 500,000 square feet of classrooms, lecture halls, and office space, share DNA but are not identical, Diller explains. Both have a “layer-cake” arrangement with floors for academic uses alternating with those for the school’s administration and faculty. Spiraling stairs carve through the volumes, linking spaces for socializing and collaboration, including lounges, study areas, and breakout rooms. This stacked organization is highlighted on the buildings’ exteriors with glass fiber reinforced gypsum protrusions on the otherwise mostly glass facades. At Kravis, academic floors are enclosed in clear glazing pulled in from the edge of the floor plate, while faculty floors utilize fritted glass mounted flush with the slab edge. At Geffen, meanwhile, the envelope’s frit pattern more gradually transitions from opaque to transparent and the building’s individual levels cant in and out, creating angled cantilevers. 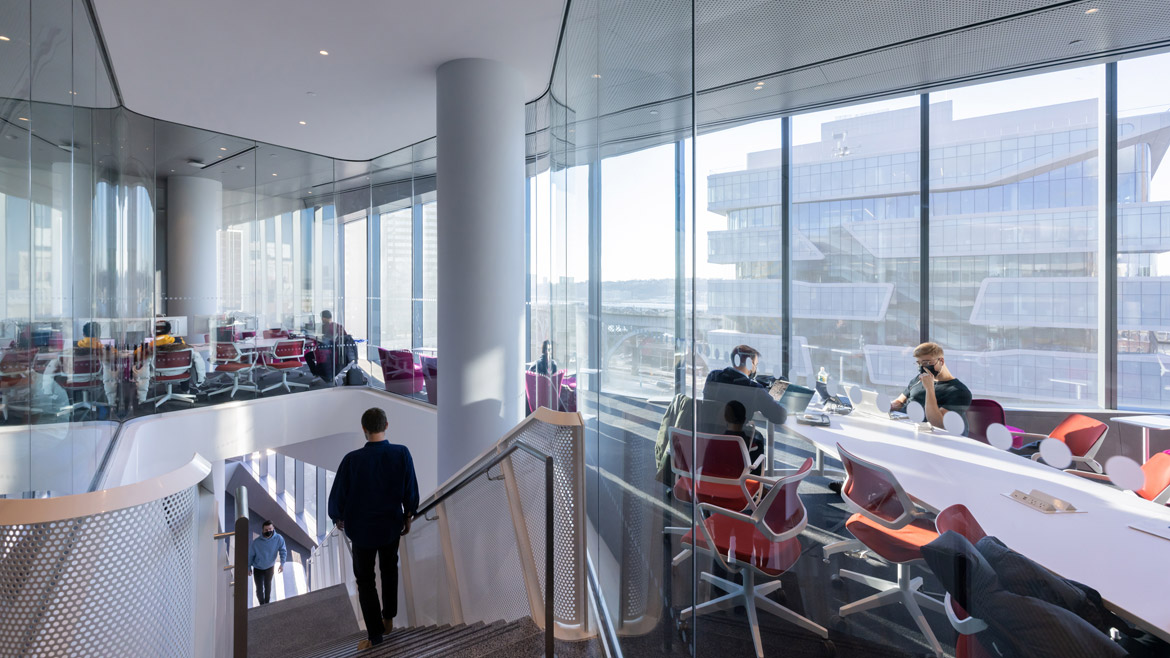 The business school buildings join three previously completed Manhattanville structures: the Jerome L. Greene Science Center, the Lenfest Center for the Arts, and a conference center known as the Forum, all designed by Renzo Piano Building Workshop (RPBW). And like those earlier Manhattanville buildings, Kravis and Geffen have transparent ground floors linked to the existing urban grid, as required by the Manhattanville Campus masterplan which was conceived by RPBW with Skidmore, Owings & Merrill. “We knew that Manhattanville could not be McKim, Mead & White with walls to the street,” says Columbia president Lee Bollinger, referring to the cloistered nature of the historic campus in Morningside Heights, 10 blocks to the south, and to the designers of its original master plan. “The new campus had to be part of the community,” he says. 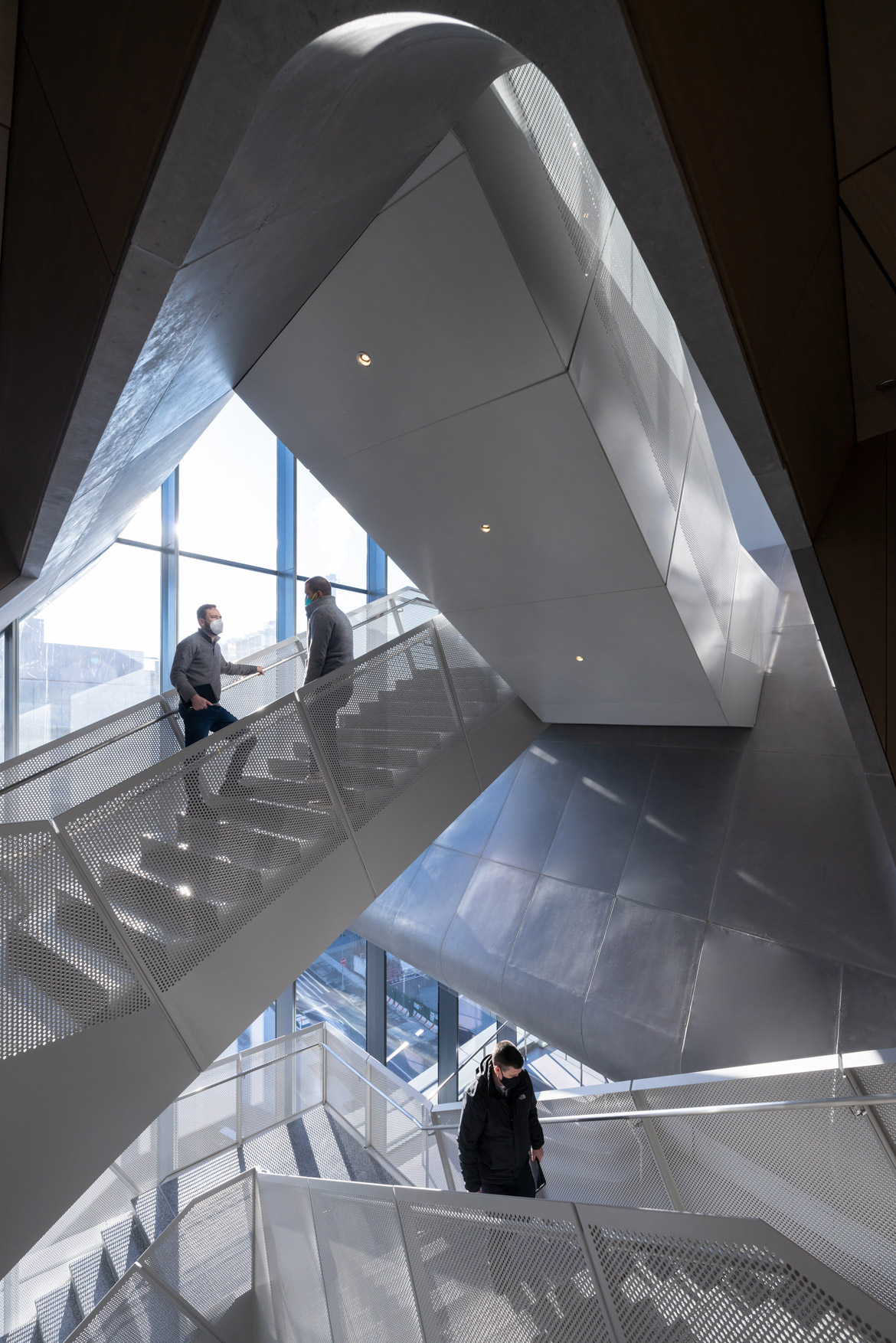 A sculptural stair carves through the floor plates at Kravis. Photo © Iwan Baan

At Geffen and Kravis, the visual permeability is not limited to the first floor: passersby can see occupants traveling up and down the sculptural stairs, and from within the buildings, students can appreciate their urban surroundings. For instance, from many of the classrooms in Kravis, an early-20th-century viaduct that defines the new campus’s western edge is visible, as is the Hudson River beyond it. These unobstructed views are enabled by the generous glazing and structural ingenuity: so-called “skip trusses” on the alternating faculty levels allow for nearly column-free floors above and below.

The desire to engage the neighborhood is also manifest in some of the programming housed within the Manhattanville facilities. For instance, the ground floor of Jerome incorporates a community wellness center; the base of Kravis includes retail space; and Geffen’s first floor has a café, while its second floor hosts an incubator for Harlem small businesses. Naturally, these amenities are not purely altruistic. They are, at least in part, intended to quell nearby residents’ opposition to the university’s expansion and the rezoning of the former manufacturing district, approved in 2007. 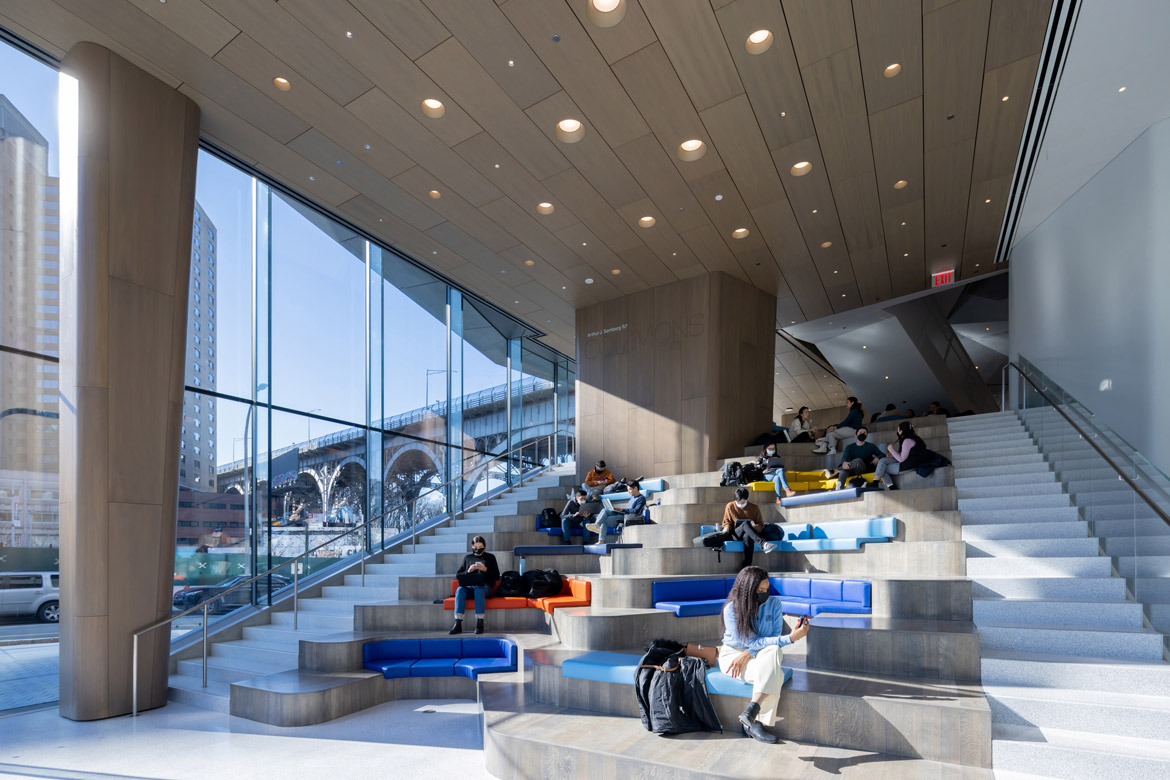 Tiered oak seating at the base of Kravis is intended as a “living room” for students, faculty, and staff. Photo © Iwan Baan

The next phase of the Manhattanville expansion has already started with the construction of a 34-story residential tower for graduate students and faculty. But with so much of the master plan yet to be realized, it will likely be decades before the effort’s success in creating a lively urban district can be fully evaluated. However, five buildings in, the university seems off to a promising start. We can only hope that Columbia looks to the business school buildings and their dynamic facades, visual porosity, and community programming in the development to follow.