A curvilinear, sculptural house on a Greek island in the Aegean Sea convincingly testifies to a skillful melding of topography and architecture. Embedded in the slope of a hill in Antiparos, the Ridge House seems to grow from the site. Its serpentine plan, local gneiss stone, and episodic sequence of spaces—courtyards, lightwells, planted roofs, and expansive terraces—enrich the experience of occupying this site. Let us not forget the view of the water. 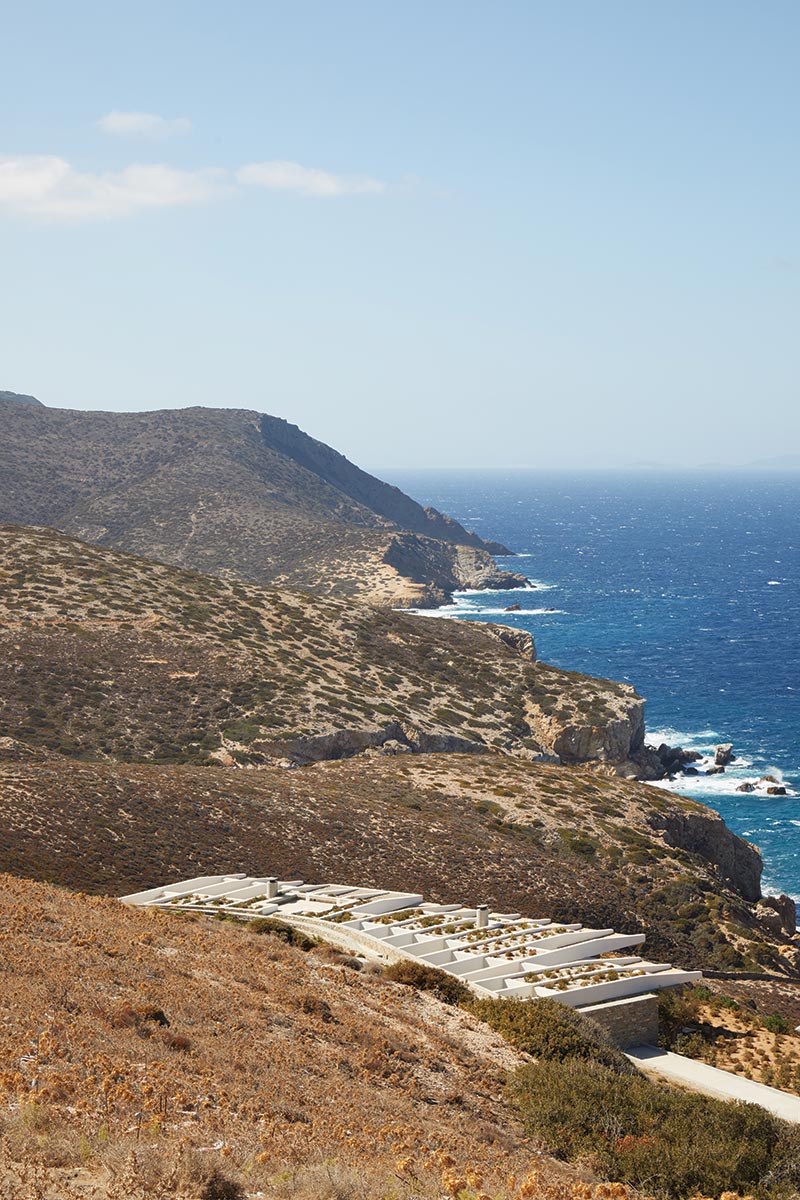 From the entrance on the north, the fan-shape structure of the roof echoes the contours of the coast. Photo © Ed Reeve, click to enlarge.

The designers, AREA Architecture Research Athens, worked closely with Iasson Tsakonas, head of Oliaros Property Development, to insert the house’s reinforced-concrete structure into the steep hill so that vistas are oriented west and south, to the deep blue waters of the Aegean. The private and public spaces spill down from the entrance on the north to the guest wing to the south.

Along a contoured edge on the western side, the house swerves out so that fan-shaped pergolas shield terraces from the intense sun. When desired, sliding low-iron glass walls can be closed to separate the interior from the outside. Along the east, an undulating retaining wall of concrete and stone forms the backdrop for open-air paths and courtyards carved out of the earthbound structure. 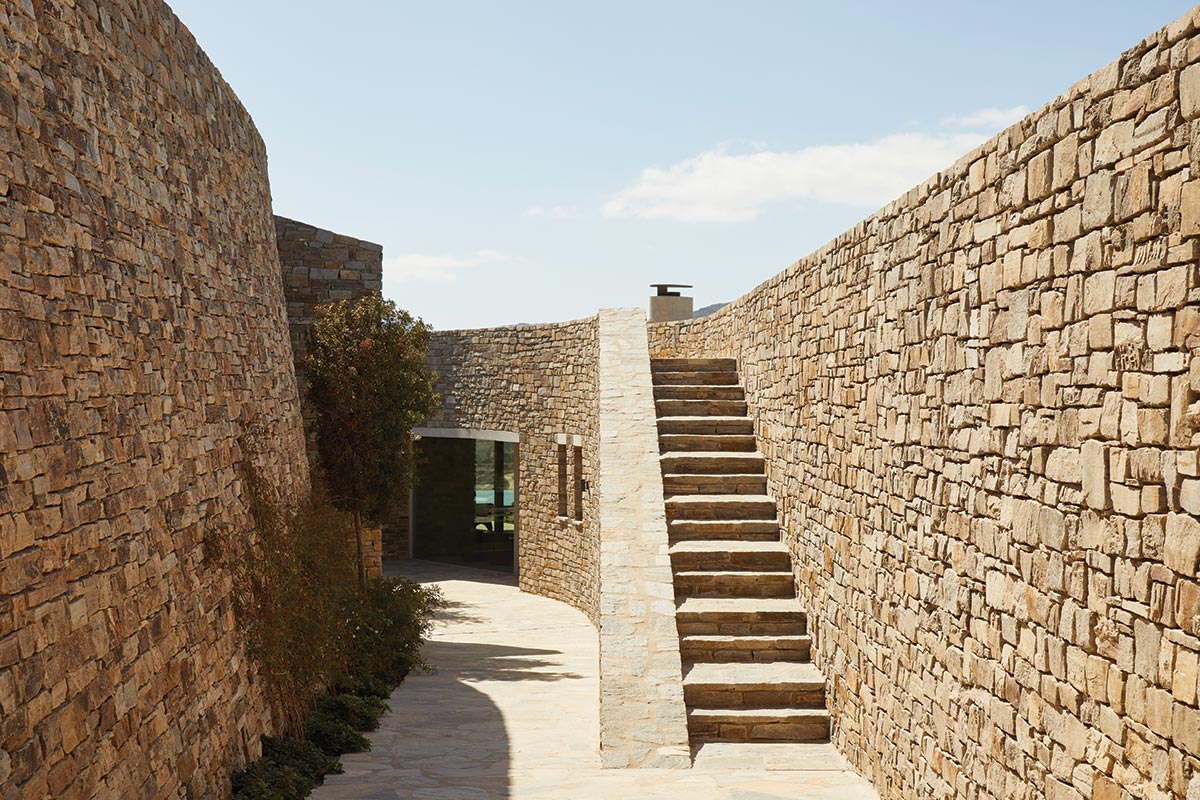 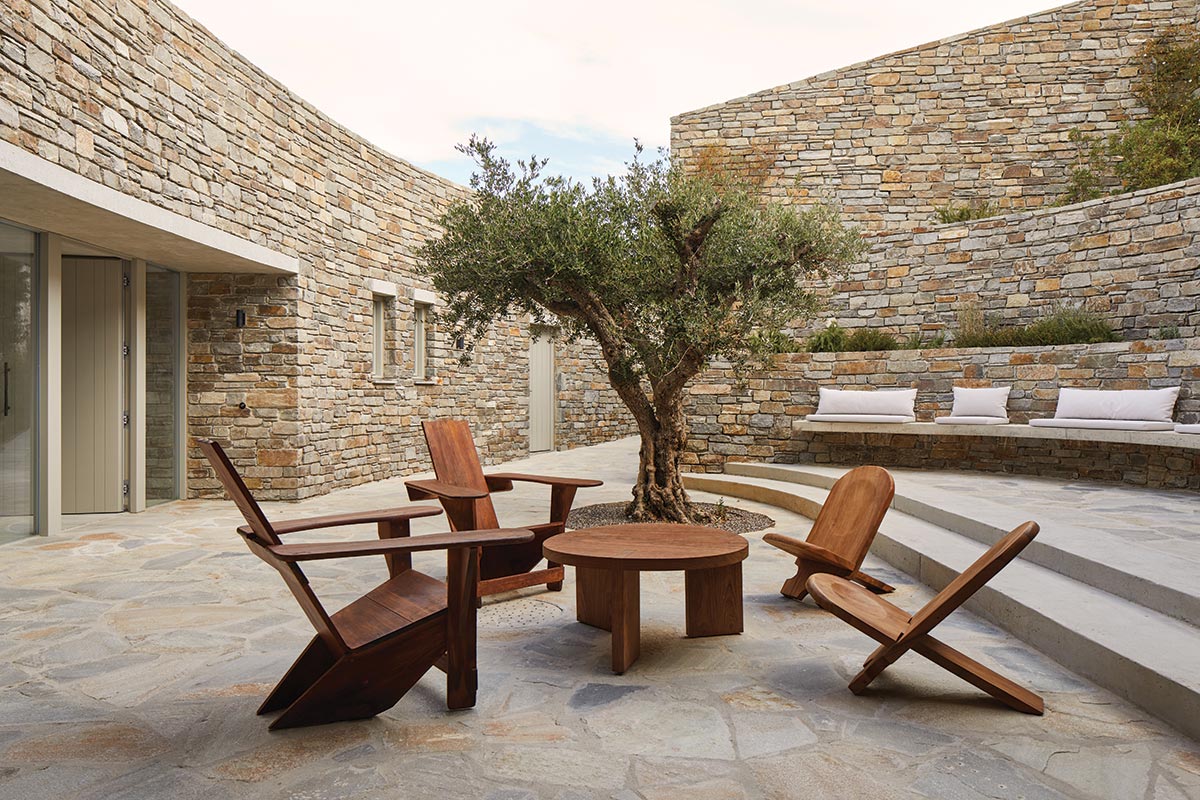 Styliani Daouti, Giorgos Mitroulias, and Michaeljohn Raftopoulos, AREA’s partners, all did graduate architecture work in the United States. Following their American odyssey, they formed an office in Athens in 2006, where they eventually met Tsakonas, who had some arresting architectural projects in mind.

The developer had begun buying large pieces of land in Antiparos in 2001 for vacation retreats (by now, some 50 properties). The draw: the island is in the Cyclades, known for its picturesque white, cubiform dwellings, and is a short ferry trip from the larger island of Paros, itself just a 45-minute plane ride from Athens. In the beginning, the land Tsakonas purchased had no water or electricity, only rubble-strewn dirt roads. He installed electric lines and fiber-optic connections underground and created a desalination plant to supply the houses with water and to fill the swimming pools. 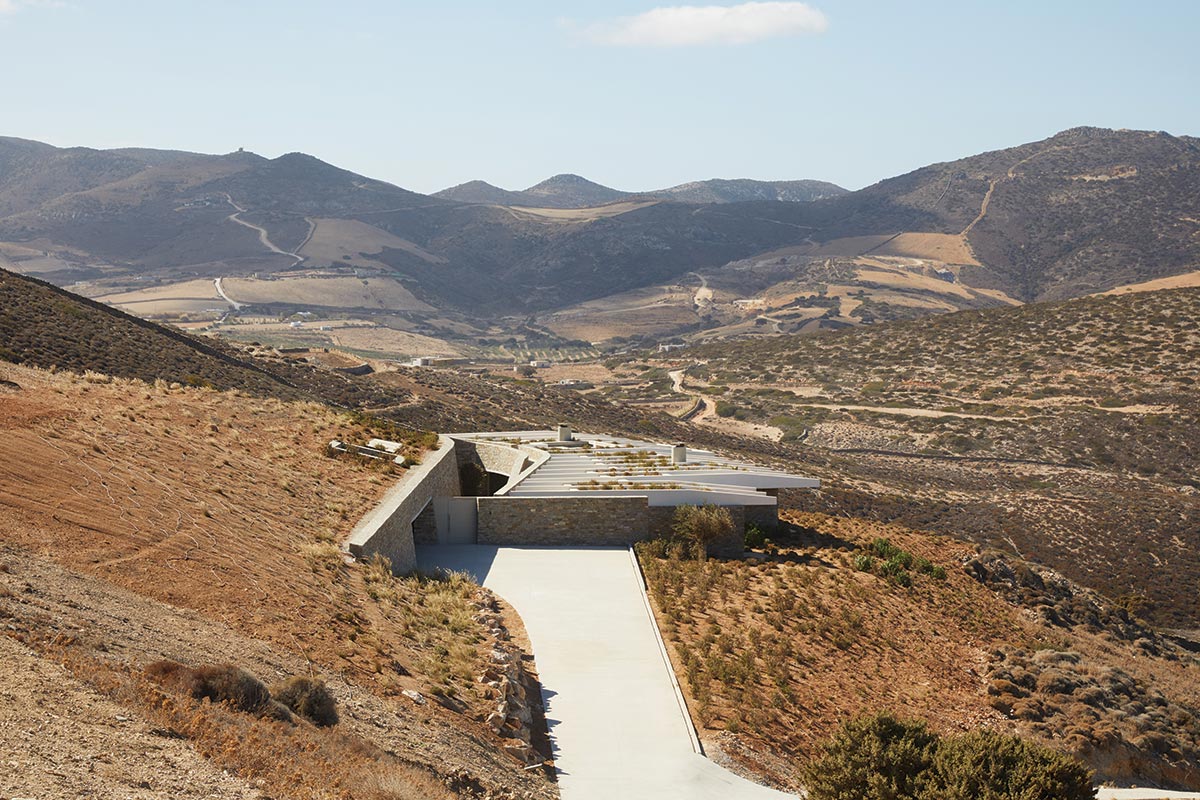 The garage is tucked into the hill on the north. Photo © Ed Reeve

But the idée fixe was the architecture, and every house would be hidden from the others. Tsakonas created master plans for clusters of lots (each house sits on four acres), selected architects (including Atelier Bow Wow, Harry Gugger Studio, and Sou Fujimoto), and worked with them on the schemes. Once he obtained permits, he started pre-selling the unbuilt designs to clients, who would then work with architects on customizing their house. Existing design restrictions called for buildings of local stone and plaster that were no higher than 23 feet, but Tsakonas began to encourage houses to be dug into the hills so they would not impinge on the sight lines of other residences.

The couple who own Ridge House live in Paris. The husband found AREA “talented and inspired.” He also points out that “the architects listened to us” about the modifications he and his wife wanted, such as ample storage and the generous use of stone. The couple is gratified with the results. “We are here alone in front of the sea,” the husband says. “While the roads are rough, that is part of the charm. This is a sure way to have privacy.”

The kinesthetic experience of moving through the labyrinthine house supports this sense of privacy, but with a logical circulation—you don’t need Ariadne’s golden thread to find your way out. As you enter from the parking area, you step along a butter-tan stone-walled path, bounded on one side by open stairs that lead to a planted roof terrace. Walking on, you come to an open courtyard, protected by curving stone walls. “We do this to create several microclimates on a site that is very rough and windy,” says Mitroulias. 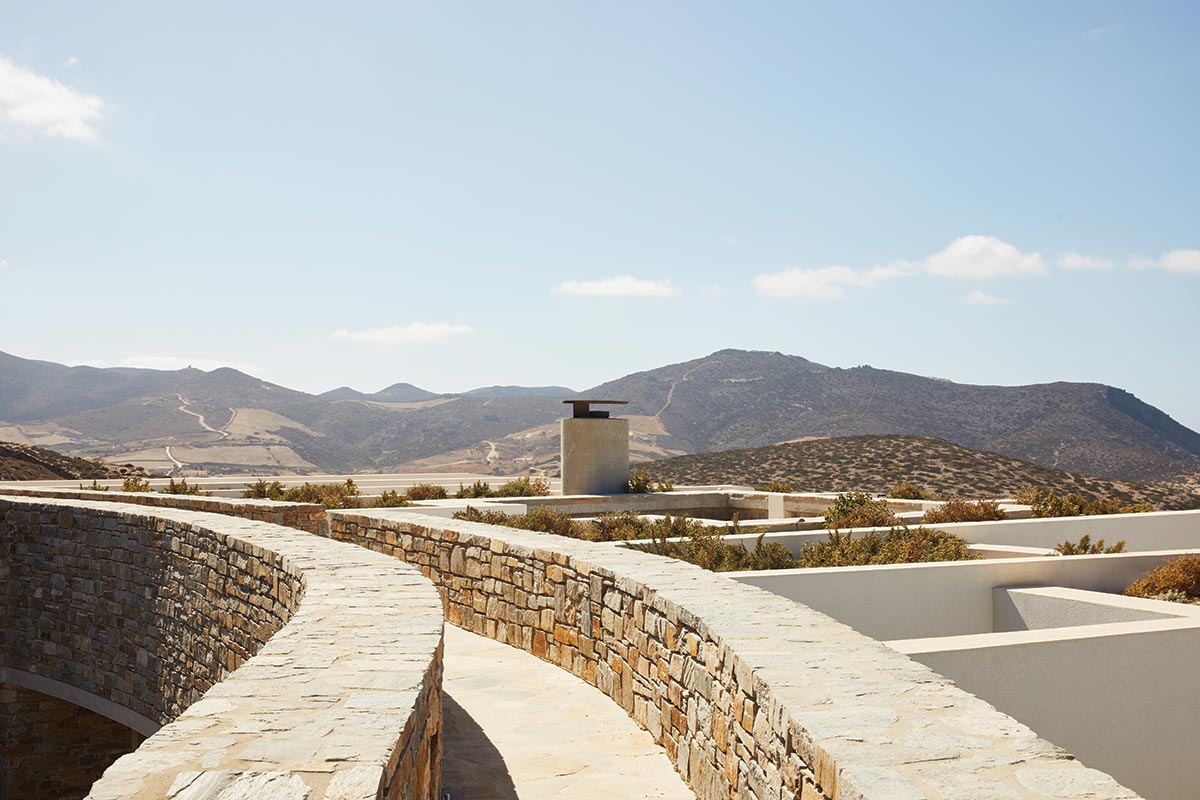 Turning right, you cross a threshold into a low vestibule before descending a few steps into the living room. Here the compressed space lifts up and seems to push out beyond the glass window wall to the breathtaking view of the blue Aegean. “The entire house is a series of thresholds,” says Raftopoulos. “The interstitial spaces connect them together.” A terrace shaded by a pergola stretches toward the south, facing an infinity pool that seems to meld with the sea in the distance. 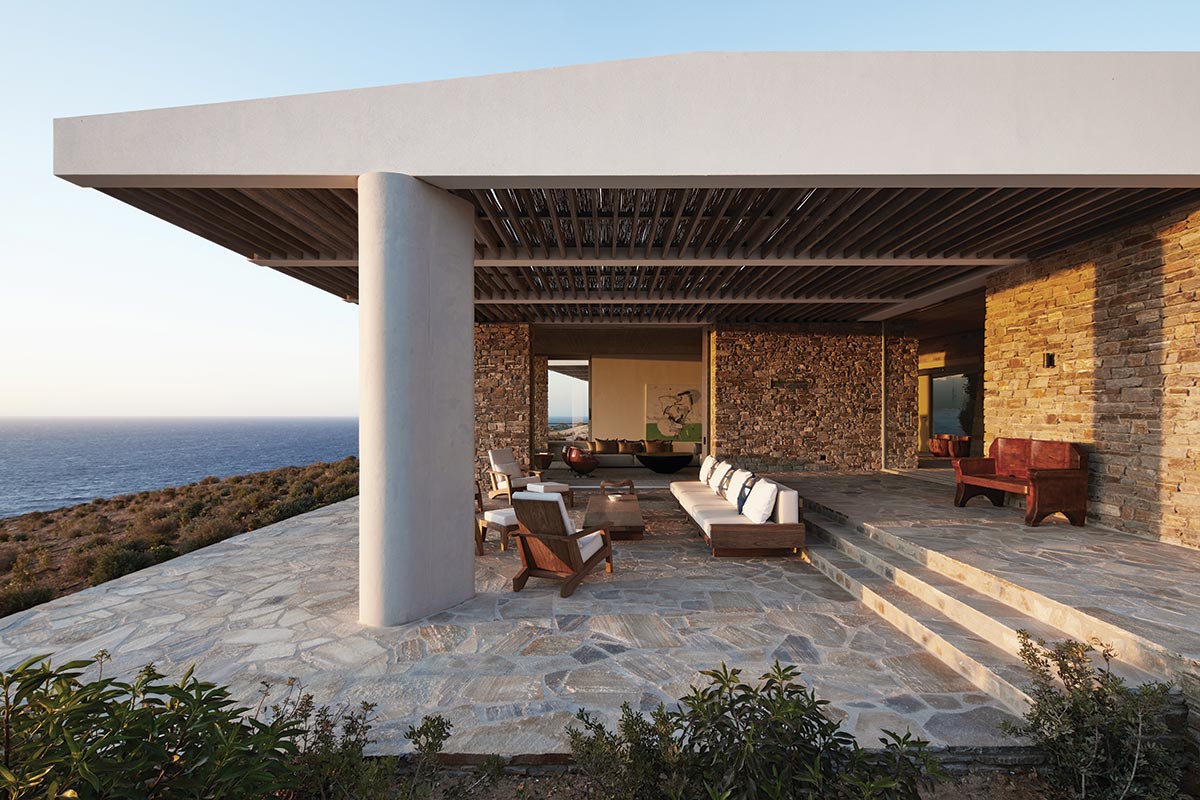 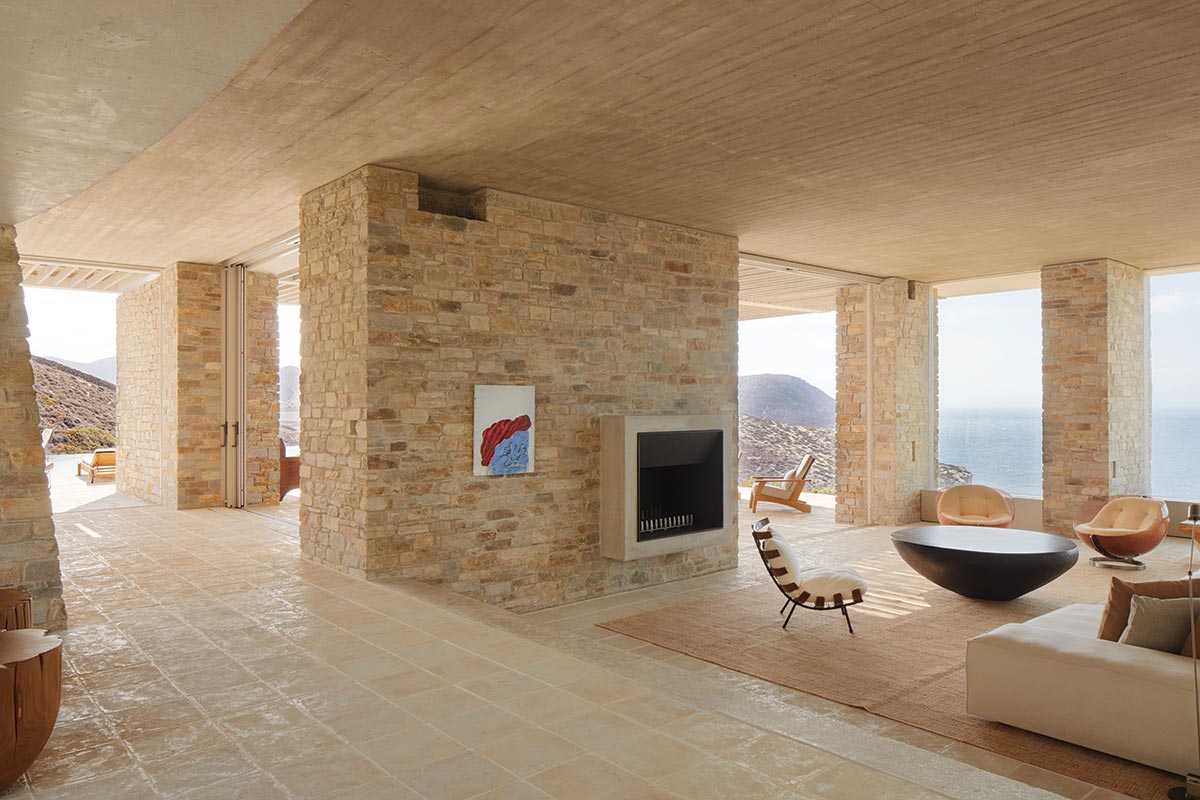 Next to the pool and a large outdoor dining area, also sheltered under a pergola, are a half-dozen guest bedrooms on two tiers. The upper level adjoins the pool area; more bedrooms below open onto a sunken garden, while the rear spaces, tucked into the hill, are punctured from above with light wells. The main bedroom and the larger guest bedroom, at the north end of the house, have their own terraces—and views. 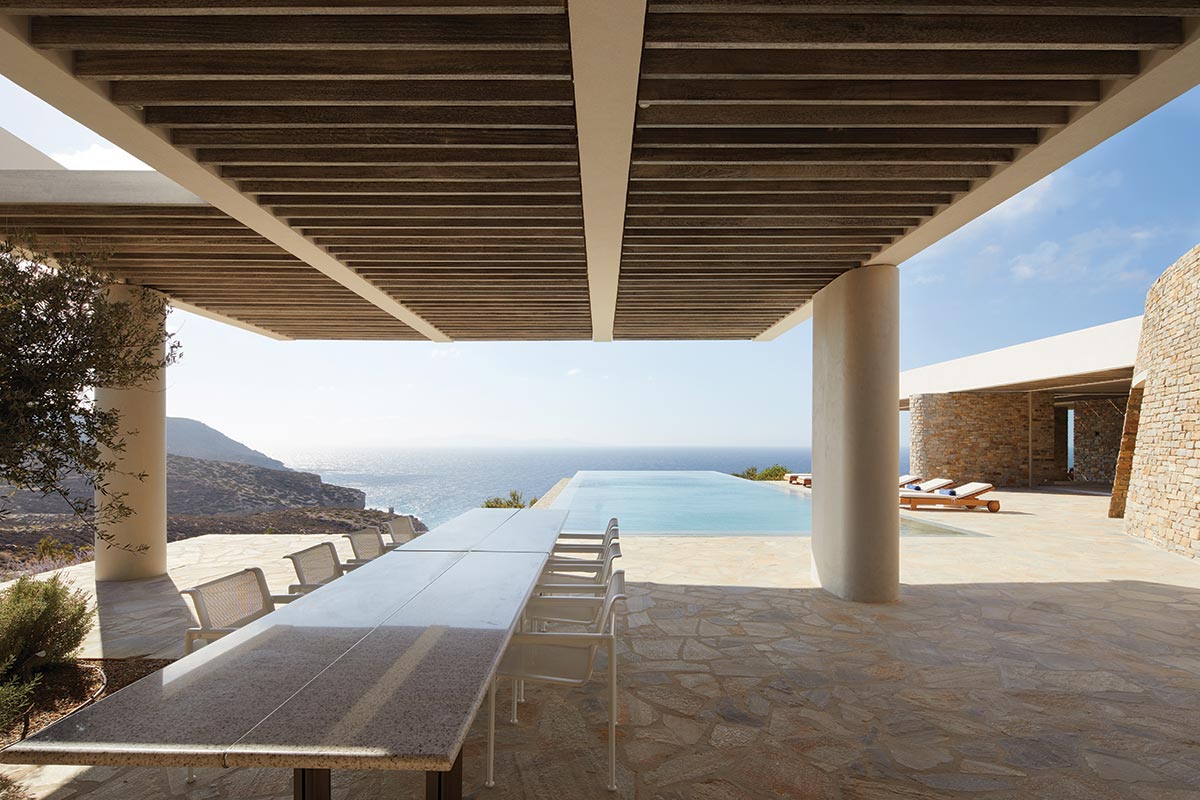 A dining terrace is shaded by another pergola. Photo © Ed Reeve

It is no surprise that this extraordinary creation—6,000 square feet for the main level, 2,500 square feet for staff quarters underneath, which are illuminated by light wells and courtyards—involved extensive earth moving and elaborate construction. The poured-in-place concrete structure, set into the dry, rocky soil, required tactical engineering. The concrete deck roofs fan out with beams projecting up from the top of the slabs, so that the pine-board-formed concrete ceilings inside are entirely flat. The prominent beams atop the roof create traylike edges for planting beds. Where the concrete beams extend over the terraces, iroko wood and cane fill in the open gaps between the beams to help shade outdoor areas. These pergolas are supported on the stone walls, piers—and, notably next to the pool—on reinforced-concrete columns of varying shapes evocative of Le Corbusier’s piloti. 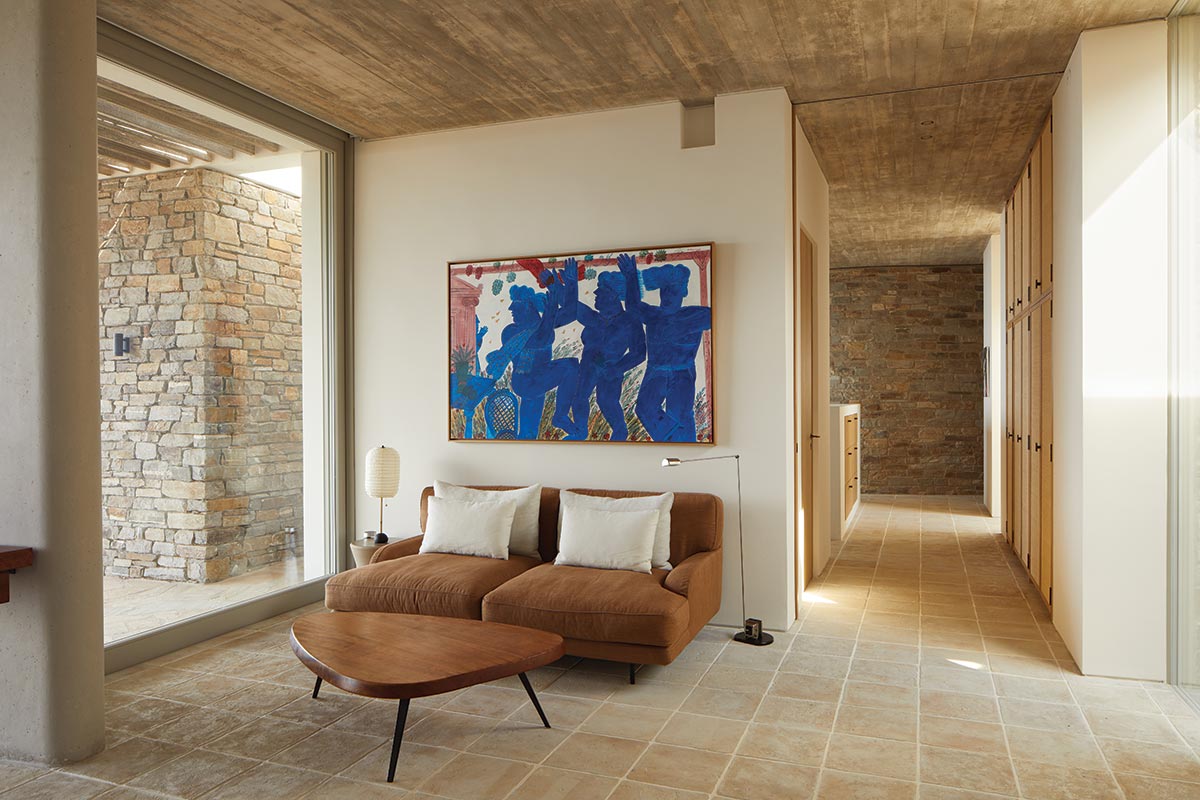 The craggy, volumetric stone walls are built of hand-chiseled blocks from nearby quarries, set dry so that the recessed joints do not encourage mold. Although the house has air conditioning, the stone walls obviously help keep the place cool.

The clients brought in Brussels-based interior designer Nelly Smets, of the firm François Marcq Interior Architecture, who had previously renovated the couple’s Paris apartment and knew their predilections. But she also became attuned to the architects’ thinking; her choice of materials, such as the Italian terra-cotta tiles for the floors, or the alpaca and linen curtains in the main bedroom, reflects AREA’s ethos of minimalism and natural materials. “The architecture is unusual and strong and fits so well into the landscape,” she says. “We all wanted to be integrated with the power of the site.” 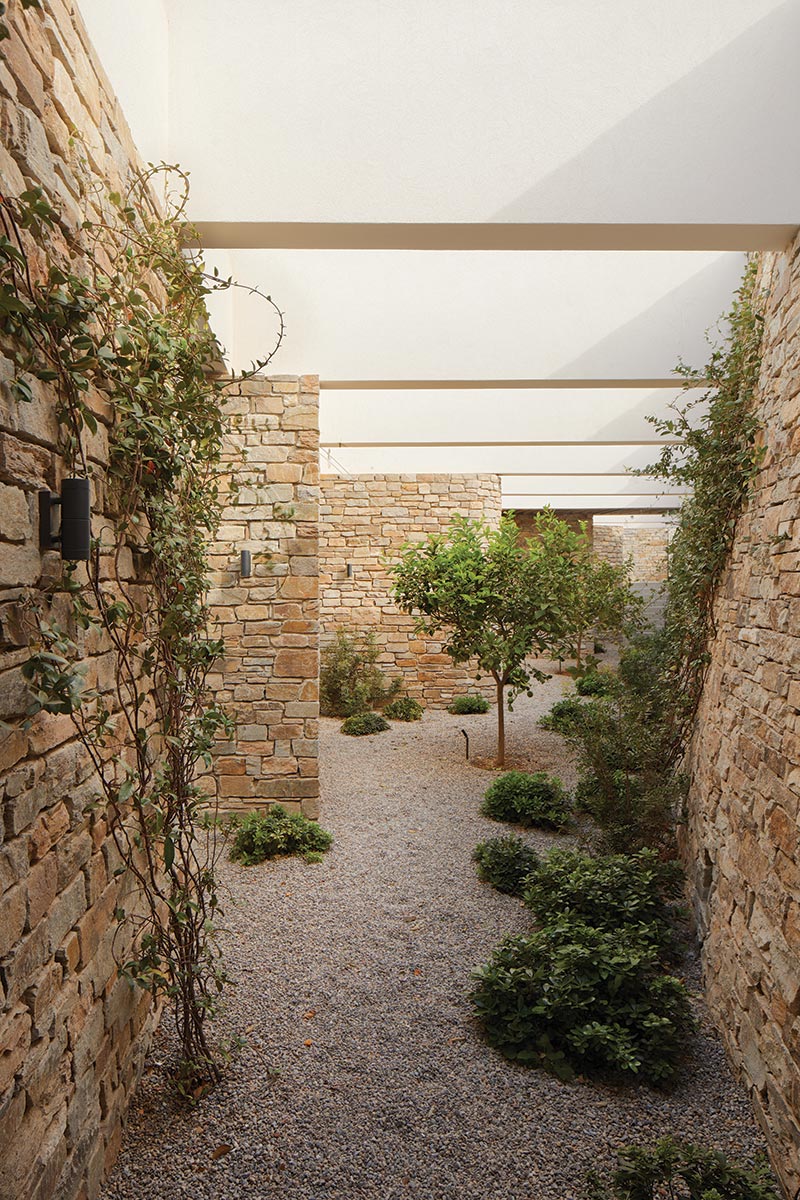 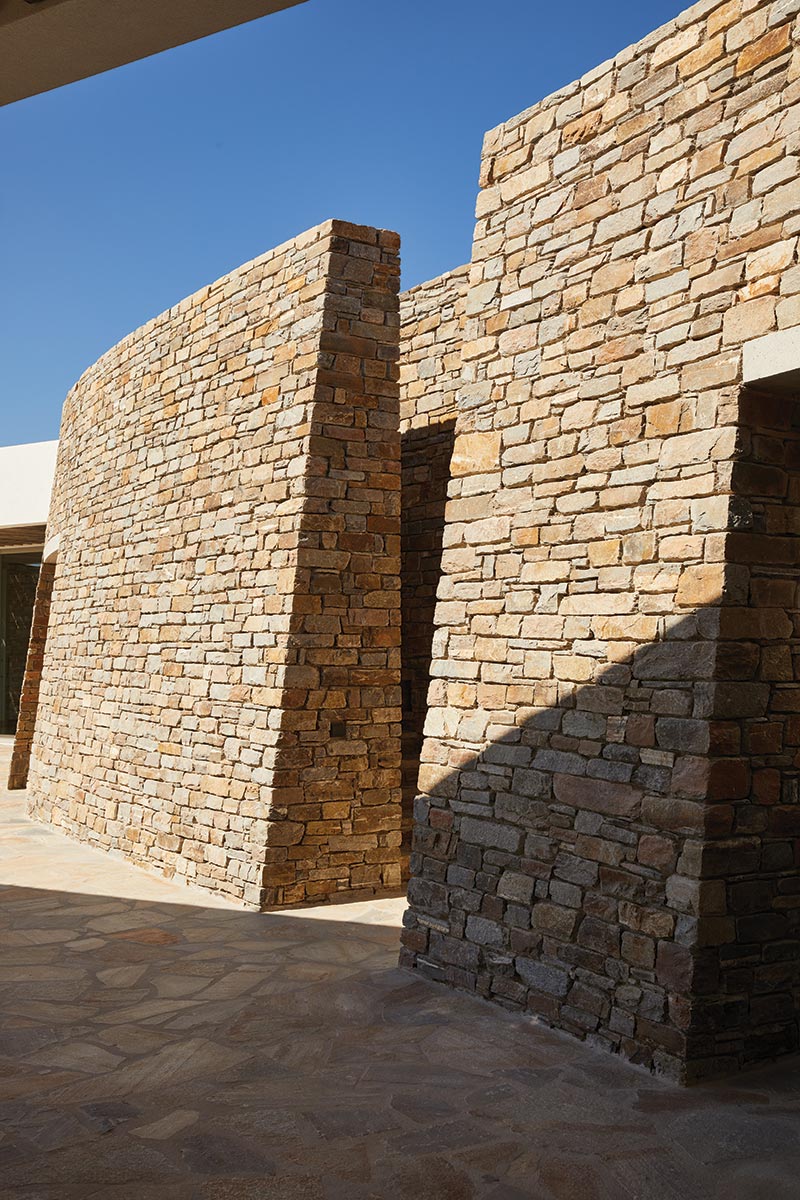 A private walk meanders by the main bedroom and guest room (5). Sloping stone walls mark the entry to the kitchen from the pool area (6). Photos © Ed Reeve, click to enlarge.

The sense of craft prevails in the precise way doors, cabinets, and other elements are put together, even when some walls are simply brick with lime-plaster finish. The landscaping, undertaken by Doxiadis +, reflects a commitment to self-sustaining native plants, such as centaurea spinosa, that can withstand summer heat and thrive in rocky soil.

The strongly collaborative efforts of all those involved produced a seamlessly powerful work. AREA, in particular, has sensitively combined historic and modern vocabularies with an inventiveness that emphasizes the topography, a curvilinear plan, a full complement of spatial hierarchies, and natural materials. It all comes together with a forceful yet intrinsically organic attitude toward the earth and the sea.

Ridge House’s lead architects Giorgos Mitroulias and Michaeljohn Raftopoulos take Deputy Editor Suzanne Stephens on a tour of the 8,500-square-foot house, which is embedded in the slope of a hill in Antiparos, Greece, overlooking the Aegean Sea. 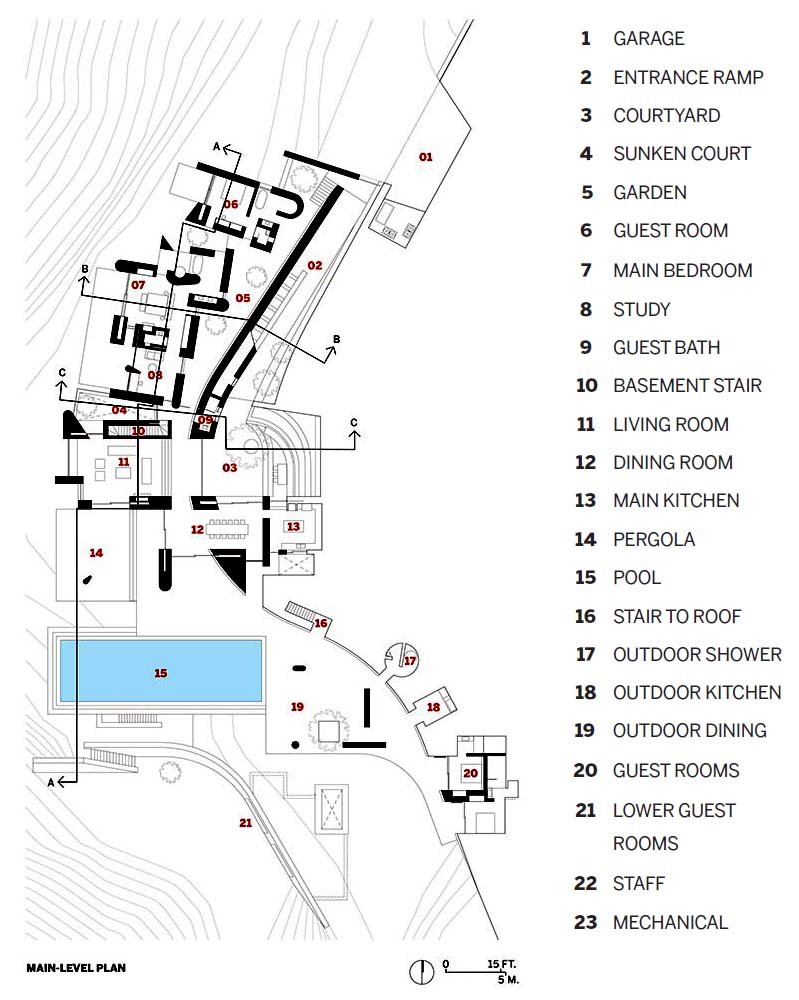 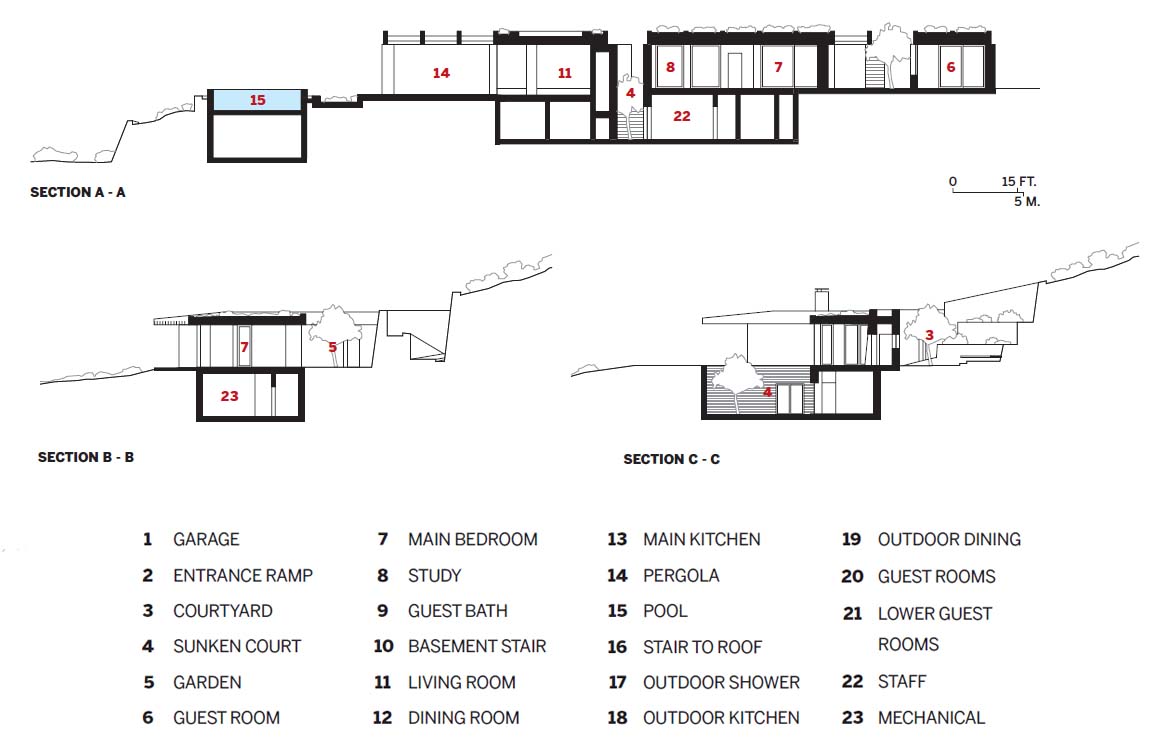