When the 2020 AIA Gold Medal winner, Marlon Blackwell, signed on to design what would be the first legal casino in Arkansas, in 2017, he probably had no idea he would end up in a precedent-setting federal case over intellectual property rights. Nor was he likely to expect to be summarily fired by his client, the Quapaw Nation—the local indigenous tribe behind the casino—particularly because he was pushed out by the associate architect that he had recommended to the tribe, Memphis-based HBG Design. Using Blackwell’s design, the Quapaw convinced the good voters of Arkansas to amend their constitution and legalize casino gambling; then the 12-person Fayetteville firm Marlon Blackwell Architects (MBA) enlisted HBG to provide technical architecture on what looked to be a $250 million building called the Saracen Casino. The lawsuit, MBA v. HBG/Saracen Development/John Lane Berrey (the tribe’s development company and its CEO) alleged that HBG co-opted Blackwell’s design after completion of schematics, worked with the client to terminate the design architect from the project without paying any fees, violated Blackwell’s copyright, and interfered with his firm’s business. On the brink of going to trial last winter, Blackwell and HBG settled the case on terms that, while confidential, were characterized by Blackwell as making him “very, very happy.” 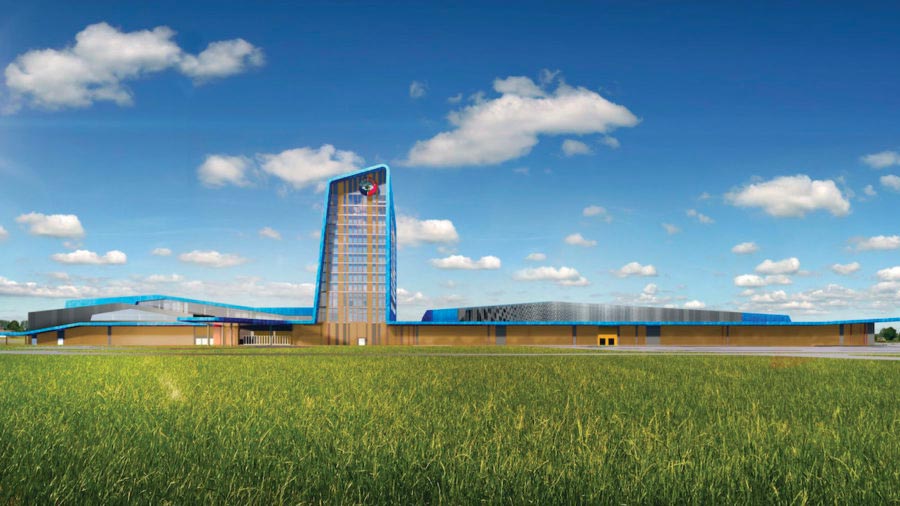 While the case never made it to court, Blackwell’s well-documented assertions (in his motion for summary judgment) of his intellectual property rights—easily verified by records of HBG’s access to his original, digital design material and particularly his BIM data available on a shared server—made the settlement and obvious outcome. Had the case gone to trial, his argument would be a template for other designers who find themselves in a similar fix.

Public court documents suggest that there was as much as $6 million in fees in play; extensive, improper use of Blackwell’s design documentation; and the removal of references to Blackwell on project title blocks and other documents. What remained was Blackwell’s design concept and a lot of project material that HBG claimed as its own. Those same documents describe HBG’s recommendation to the tribe that significant money could be saved by not paying Blackwell’s fees.

A firm’s right to defend its intellectual property has evolved considerably since Congress passed the Architectural Works Copyright Protection Act (AWCP) in 1990, which extended protection to architectural ideas beyond such traditional design documentation as models, plans, or elevations. Though drawings or other representations were previously protected from outright copying, building something that was an exact copy of someone else’s design by observation was just fine. In a 1976 case, Scholz Homes, Inc. v. Maddox, a homebuilder saw a competitor’s scheme at a trade show and sketched the plans and elevations, then hired a drafter to create a complete set of documents for the house, which he subsequently built. Since the original plans themselves weren’t seen or copied, the court offered no protection. But, after 1990, purloining an “intrinsic” or subjective set of ideas was explicitly considered a violation of copyright, just as copying or misusing “extrinsic” or objective material was illegal.

The tricky thing about protecting an architectural design is that it is composed of an arrangement of common elements (like windows and doors) that are usually created by someone else, and that—at least in a decent building—have both aesthetic and functional value. Case law since 1990 concludes that a purely functional arrangement is not protectable itself, and the U.S. Supreme Court has held that there must be a strong dose of originality for a design concept to be immune from copying: in fact, the AWCP promotes “originality in design, thereby enriching our public environment.” Intellectual property scholar David Shipley suggests that plan drawings of prototype houses, for example, have what he calls “thin” protection against direct copying, since they often simply rearrange standard components like rooms, fenestration, and furniture. As Gene Markin explored the case law in the National Law Review, most of the questions around this since 1990 are of the “thin” variety, as developers, builders, architects, and clients argue over of the use of house plans, including the interesting example of a “house plan troll” which attempted, in 2017, to copyright thousands of house plans and then sued anyone who tried to build anything remotely similar. In that case, a firm called Design Basics copyrighted 2,400 house plans and then sued Lexington Homes, claiming infringements. Lawsuits were part of Design Basics business model, and they filed hundreds of infringement claims. Eventually, those cases were tossed out of court. Thin copyright ice indeed. But a Blackwell-level design gets “thick” protection under the law as an original, creative act.

In our digital era, further protection is offered by the Digital Millennium Copyright Act of 1998, which, among other restrictions, makes illegal the tampering with what is known as “copyright management information”—the data that identify the copyright holder of a protected digital work. Removing the design architect’s title block from original drawings generated from his building-information model, and then using those drawings to ostensibly create a “new” project, is double trouble. In their request for summary judgment in Blackwell’s case, his attorneys argued that the defendants had committed both violations: breached the contract between them (citing as evidence an agreement of the precise calculations of how the architectural fee would be split between the two firms) and interfered with Blackwell’s business. His assertion of satisfaction suggests that the settlement assuaged all these concerns, although the only public component of that settlement was that all future attribution of credit for the project must contain the following: “HBG Design, Inc., architect of record, derived from an original design by Marlon Blackwell Architects, P.A.”

Still, examples of violations of “intrinsic/thick design” ownership are scarce. Before the Blackwell case, two prominent instances included a case in 2005, Shine v. Childs, in which a Yale graduate student asserted that SOM’s David Childs was unduly influenced by a scheme presented in the final review of a skyscraper studio, from which SOM incorporated key elements into the first version of Freedom Tower in lower Manhattan. After a judge decided that the case could go to trial—meaning there was a reasonable chance a jury would agree with Shine—SOM settled. A 2002 case, Sturdza v. Emirates (UAE), asserted that the eventual winner of a design competition, for a chancellery in the Gulf state, incorporated substantial components of another entry’s design. The federal court held that plaintiff’s scheme was protectable because the UAE’s selected firm violated her copyright of the design by borrowing liberally from her use of Arab motifs in her original submission. In Feist Pub., Inc. v. Rural Tel. Serv. Co., the Supreme Court states that, “[t]he sine qua non of copyright is originality. To qualify for copyright protection, a work must be original to the author . . . [meaning] the work was independently created by the author (as opposed to copied from other works) and that it possesses at least some minimal degree of creativity. To be sure, the requisite level of creativity is extremely low; even a slight amount will suffice.” Thin cases are relatively easy to resolve—did you have access to the copied material, and did you copy it?—but thick cases require careful evaluation of novelty and creativity, judgment required of judges and juries with little experience and no architectural training.

Blackwell now joins this short but important list by setting a clear example for designers everywhere. Copyright protections are matters of federal law, but architects rarely file such lawsuits in federal court. Yet, despite his firm’s small size, Blackwell was undeterred by the complexity, cost, and pure distraction of the lawsuit. Controversies about attribution among collaborators may only rise to a violation of the AIA Code of Ethics Rule 4.201 that prohibits false claims of credit for work, but having an AIA Gold Medal winner as plaintiff on the federal docket (even though the matter was settled rather than tried) sets a precedent, both for the courts and other architects, since Blackwell successfully defended his design, his reputation, and his pocketbook.

Designers can protect their ideas in the digital age, even though information is fluid and easily copied. Consistently maintaining copyright-management information by identifying the author is the first step, and clearly indicating copyright attribution on “any tangible medium of expression” is critical. Equally important is understanding IP licensing: who has the right to use and distribute design information, and to what ends? The normal distribution of design data during a project—to clients, collaborators, and builders—does not create an unlimited right for those parties to use that information in any way they see fit. Defining the particulars and parameters of those rights of use is a must.

The AIA’s new B111-2022, their standard form agreement between the Owner and Design Architect, does an excellent job of defining these rights in Article 7/Copyrights and Licenses. It explains that routine, workaday use of the design architect’s ideas does not compromise the designer’s copyright, and that termination of the project doesn’t infringe on those rights. Distributing copyrighted information during routine project exchanges does not eliminate copyright protection, and such protection survives even if the project ends prematurely. In fact, under the terms of the new B111, the owner’s right to use these design ideas is contingent upon proper payment for same, and the architect of record’s derivative work (the working drawings, for example) may only be used for purposes of “constructing, using, maintaining or altering the project” and, by implication, the ideas contained in those documents remain the intellectual property of the design architect. If nothing else, these provisions make it clear to the entire project team that the designer’s original ideas have value and will be protected under federal copyright law.

Blackwell’s motion for summary judgment in the suit argued that his case was strong enough on the merits that the judge should simply rule in his favor without a full trial. The parties settled immediately thereafter, suggesting that the case was clear-cut despite not resulting in a judicial opinion. But the strategy is a template for defending a design that deserves “thick” protection. As University of Michigan law professor Luis C.deBaca told me, “the lack of jurisprudence does not equal a license to steal.” With Blackwell’s example as precedent, architects who vigorously defend their creative ideas are much more likely to succeed.

Phil Bernstein is an associate dean and professor adjunct at the Yale School of Architecture, where he teaches professional practice in the hopes of inspiring the next generation of firms.