Belmont Freeman
2 Comments
The historian of the City of Havana for more than 40 years, credited with the transformation of Old Havana into a showcase of exquisitely restored Spanish colonial architecture, died Friday, July 31.
Read More 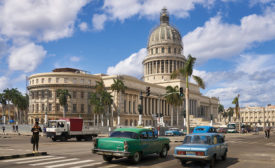 Despite restored and new architecture, the outlook for the Cuban capital is grim. 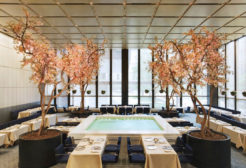 As a final act of vandalism, the vintage mid-century furnishings of the legendary restaurant are to be sold in July.

What Does a U.S.– Cuba Détente Mean for Architecture?

Presidents Barack Obama and Raúl Castro stunned the world on December 17, 2014, when they announced that the United States and Cuba would restore diplomatic relations after 55 years of estrangement.

Belmont Freeman
No Comments
Designed by Coyula and other colleagues, El Parque de los Mártires Universitarios, completed in 1967, stands at a major intersection down the hill from the University of Havana's steps, where it remains one of the city's most powerful monuments to the revolution. The celebrated Cuban architect and urban planner Mario Coyula Cowley died in Havana on July 7, after a long battle with cancer. He was 79 years old. During his career Coyula was director of the School of Architecture at the Instituto Superior Politécnico José Antonio Echeverria (ISPJAE), head of the Group for the Integral Development of the Capital,
Read More

Belmont Freeman
No Comments
I was startled to read in the New York Times about the plan to remove Picasso’s large curtain, Le Tricorne (1919), from the landmarked Four Seasons restaurant in the Seagram Building in New York. The reason, according to current owner RFR Holding, is the imminent failure of the travertine-clad wall against which the 19-foot-high curtain, originally painted as a backdrop for a Diaghilev ballet, is mounted. I was aghast—and surprised, as I am very familiar with this wall.
Read More
Subscription Center
More Videos