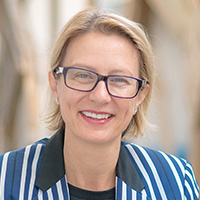 Dean of the College of Architecture, Planning and Public Affairs, University of Texas at Arlington

Adrian Parr is the Dean of the College of Architecture, Planning and Public Affairs at the University of Texas at Arlington and a UNESCO Chair of Water and Human Settlements. In her capacity as a UNESCO water chair, Parr was selected by the European Cultural Center to curate an exhibition for the 2021 Venice Architecture Biennale on Watershed Urbanism where she will feature DFW and its current and future relationship to the Trinity River system.

She has published extensively on environmental politics, sustainable development, and design in the public interest. She is the author of the trilogy Hijacking Sustainability (MIT Press), The Wrath of Capital (Columbia University Press), and Birth of a New Earth (Columbia University Press) in addition to other books of cultural theory. She is the producer and co-director (with Sean Hughes) of the multi-award winning documentary, The Intimate Realities of Water, that examines the water challenges women living in Nairobi’s slum face. She has been interviewed for her views on climate change by The New York Times, television news, and other media outlets, and is a regular contributor to the Los Angeles Review of Books.