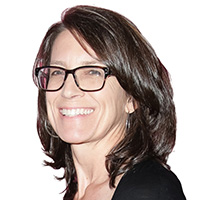 Angie Brooks, FAIA, LEEDTM Accredited Professional, BD+C, ENV SP, is a recognized leader in the field of environmental and social-equity design and is responsible for her firm’s development in the area of housing and policy, leading initiatives and overall design staff management. Angie believes that it is not enough to create great buildings and has worked to create complete neighborhoods- she co-founded a non-profit to promote good policy, density and livable communities, lectures extensively on these topics and was 2018 Chair of the National AIA’s Committee on the Environment (COTE), developing programs and advocating for policy changes at the Federal level-promoting design that achieves high levels of performance. In 2020 Angie received the AIA National and Local Citizen Architect Award and the AIA State of California Maybeck Award (the first woman ever to do so) for exemplary achievement in architectural design and ‘a different kind of legacy’ as an advocate for issues that extend beyond buildings. Ms. Brook’s firm BROOKS + SCARPA has received over fifty major design awards including five AIA COTE ‘Top Ten Green Building’ Awards. In 2009 Ms. Brooks received the National American Institute of Architects ‘Young Architect’ Award and in 2010 she received the USA Network ‘Character Approved’ Award for her innovative work in the field of architecture and her firm was awarded the National and State Architecture Firm Award from the American Institute of Architects. In 2014, her firm was awarded the Smithsonian Cooper-Hewitt National Design Award in Architecture.