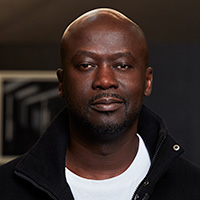 Sir David Adjaye OBE is a Ghanaian-British architect who has received international acclaim for his impact on the field.  Born in Tanzania to Ghanaian parents, his influences range from contemporary art, music and science to African art forms and the civic life of cities. In 2000, he founded Adjaye Associates, which today operates globally, with offices in Accra, London, and New York  and projects spanning across the globe.  His largest project to date, The National Museum of African American History & Culture in Washington, DC opened on the National Mall inWashington DC in 2016 and was named Cultural Event of the Year by The New York Times. In 2017, Adjaye was knighted by Queen Elizabeth II and was recognized as one of the 100 most influential people of the year by TIME Magazine.