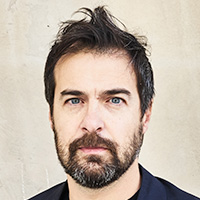 In 2004, together with Alberto Veiga, he founded the architecture office Barozzi Veiga. The practice has since worked internationally in public and private projects receiving several prestigious distinctions. Its built work includes the Ribera del Duero Headquarter (2011), the Auditorium Infanta Elena in Águilas (2011), the Szczecin Philarmonic Hall (2014), the Ragenhaus Musikschule in Bruneck (2018) and the Bündner Kunstmuseum in Chur (2018). The most recently completed projects are the Musée cantonal des Beaux-Arts Lausanne (2019) and the Tanzhaus Zürich (2019).

Between the important prizes, Barozzi Veiga has been distinguished with the Ajac Young Catalan Architect Award (2007) and the Barbara Cappochin International Architecture Award (2011). In 2012 the Ribera del Duero Headquarter, Barozzi Veiga’s first built work, was awarded with the Gold Medal for Italian Architecture for the Best Debut Work 2012. In 2015 the project for the Szczecin Philharmonic received the prestigious Mies van der Rohe Award for European Architecture and the International FAD Award. In 2018 the Bündner Kunstmuseum in Chur, Switzerland, was awarded with the RIBA Award for International Excellence, which distinguished the best 20 buildings constructed worldwide during the last three years.

More recently, Barozzi Veiga has been granted the Chicago Atheneum International Award (2019), the Best Architects 20 Award (2019) and the AD Award Architects of the Year (2019).

During the years, the office has been invited to contribute to several international exhibitions, between which the Chicago Architecture Biennal (2017) and to the Biennale di Venezia (2014 and 2016). In 2016 Barozzi Veiga presented ‘A sentimental monumentality’, an installation and an essay that defined the conceptual framework of its work, later compiled in the monographs Barozzi Veiga edited by Park Books (2014), a+u 535 (2015) and A-Mag (2018).

Architettura di Venezia (2013-2015) and at MIT Massachusetts Institute of Technology, (2016-2018). In 2020 he is going to teach again as Visiting Professor at the Cornell University in Ithaca, New York.