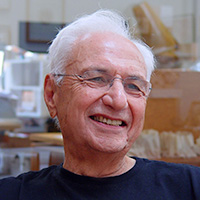 Raised in Toronto, Canada, Frank Gehry moved in 1947 with his family to Los Angeles where he subsequently received his Bachelor of Architecture degree at the University of Southern California in 1954. Upon graduating, he enlisted in the US Army and with the assistance of the GI Bill, he studied City Planning at the Harvard University Graduate School of Design until 1957. Since then, Mr. Gehry has built an architectural career that has spanned over six decades and he has produced public and private buildings throughout the world. Hallmarks of Mr. Gehry’s work include a particular concern that people exist comfortably within the spaces and an insistence that his buildings address the context and culture of their sites all while staying within the client’s budget.

Mr. Gehry’s contribution to the field of architecture has earned him some of its most significant recognitions beginning with his induction into the College of Fellows of the American Institute of Architects in 1974. The honor became the first of the over 100 national and regional awards he has since received from the organization including the distinguished Gold Medal in 1999. In addition to being awarded the 1989 Pritzker Architecture Prize, perhaps the premiere honor in the field, other notable recognitions include the Arnold W. Brunner Memorial Prize from the American Academy of Arts and Letters (1977), the Wolf Prize in Art (Architecture) from the Wolf Foundation (1992), and he was the first recipient of the Friedrich Kiesler Prize (1998). Other major architecture acknowledgments include the 2000 Gold Medal from the Royal Institute of Architects, the 2002 Gold Medal for Architecture from the American Academy of Arts and Letters, and the 2008 Golden Lion Lifetime Achievement Award at the Venice Biennale.

Mr. Gehry’s contributions to the arts has also been recognized with the 1992 Praemium Imperiale Award by the Japan Art Association to “honor outstanding contributions to the development, popularization, and progress of the arts.” In 1994, he became the first recipient of the Dorothy and Lillian Gish Award for lifetime contribution to the arts followed by the National Medal of Arts award (1998), the Lotos Medal of Merit from the long-standing literacy club the Lotos Club (1999), and the Lifetime Achievement Award from Americans for the Arts (2000). Mr. Gehry also received the John Singleton Copley Award from the American Associates of the Royal Academy Trust (2010), the Cooper Union for the Advancement of Science and Art Award (2010), and the 2015 Getty Award for his contritbutions to and support of the arts.

From around the world, governments and their organizations have also honored Mr. Gehry. In 2003, he was designated a Companion to the Order of Canada. In 2006, he was given the distinction of Chevalier and was later elevated to the rank of Commandeur (2014) of the National Order of the Legion of Honour, which is the highest honor in France for military and civil merits. In 2003, he was also inducted into the European Academy of Sciences and Arts by the European Union and in 2006, he was honored as one of the first inductees to the California Hall of Fame by the governor of California. In 2014 he also received the Prince of Asturias Award for the Arts, followed by the Leonore and Walter Annenberg Award for Diplomacy through the Arts from the Foundation for Arts and Preservation in Embassies in 2016. Later that year, he was awarded the Presidential Medal of Freedom from US President Barack Obama.

Throughout his career, Mr. Gehry has remained committed to philanthropic work both locally and internationally. In Los Angeles, he is currently engaged in a number of pro bono design projects including the headquarters for Children’s Institute Inc., a nonprofit located in the heart of the Watts that provides services to children and families effected by violence, and most recently a new center for the LA Philharmonic’s Youth Orchestra Los Angeles in Inglewood that provides free music education to students across the city. For the past several years, Mr. Gehry has also been working with the nonprofit organization River LA to coordinate policy and develop a master plan that will revitalize the 51-mile Los Angeles River by improving the waterway, creating open park space that supports the region’s biodiversity, and implementing infrastructure that connects the neighborhoods and increases access to recreational and cultural programming in the communities. As part of his extensive outreach and public engagement during the master plan design process, Mr. Gehry has personally met with several schools that stretch along the river and has since made plans to include ten of these schools in Turnaround Arts California, a program he co-founded in partnership with the National Endowment for the Arts that strives to build arts education in all schools. Internationally, Mr. Gehry contributed the design for the Pierre Boulez Concert Hall in Berlin, a performance space for the West-Eastern Divan Orchestra, a youth orchestra that unites musicians with diverse backgrounds from around the Middle East. He is also a founding board member of the Hereditary Disease Foundation, which funds innovative research towards curing Huntington’s disease.