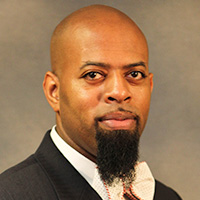 Kwesi Daniels
Head of the Architecture Department
is the Tuskegee University

Kwesi Daniels is the Head of the Architecture Department at Tuskegee University. His professional experience ranges across various disciplines, including historic preservation, architecture, sustainability management, and urban geography. Over his twenty-year career he has worked for architecture firms and government agencies on public and private sector building projects around the country. He has also played an active role in the National Organization of Minority Architects (NOMA), the Alabama Black Heritage Council, and Kappa Alpha Psi Fraternity, Inc. However, his greatest honor has been to teaching students at Tuskegee, Temple, NYU, and Columbia University in the City of New York, in addition to lecturing nationally. In 2018 he began developing a historic preservation program at Tuskegee University, which has resulted in the documentation of civil rights sites in Selma, Montgomery, and Tuskegee, Ala. Professor Daniels earned a BArch and MArch in architecture from Tuskegee University and the University of Illinois at Chicago and a MS in sustainability management from Columbia University. In 2020 he earned a Ph.D. in urban geography from Temple University. His doctoral research focused on studentification and its social impact on West Philadelphia neighborhoods. In his spare time, he enjoys playing billiards, cane twirlin’ and spending time with his family.