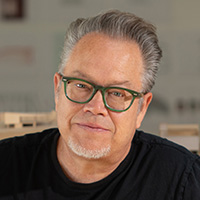 Marlon Blackwell, FAIA , is a practicing architect in Fayetteville, Arkansas, and the E. Fay Jones Distinguished Professor at the University of Arkansas. Blackwell is the recipient of the 2020 AIA Gold Medal, the Institute’s highest honor recognizing those whose work has had an enduring impact on the theory and practice of architecture . Blackwell is a lifetime member of the American Academy of Arts an d National Academy of Design Academician , a 2019 Resident Fellow of the American Academy in Rome, a nd a 2014 United States Artists Ford Fellow . Work produced in his professional office, Marlon Blackwell Architects (MBA), has received recognition with significant publication and more than 160 design awards including the 2016 Cooper Hewitt National Design Award in Architecture. A monograph of Marlon;s early work, “An Architecture of the Ozarks: The Works of Marlon Blackwell”, was published in 2005 and a new monograph titled “ Radical Practice ” , is set for publication in 2022