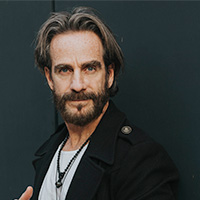 Michel Rojkind was born in Mexico City, where he studied Architecture and Urban Planning at the Universidad Iberoamericana (1989-1994).

In 2002 he founded Rojkind Arquitectos, a firm focusing on design, tactical and experiential innovation.

While addressing the challenges of contemporary life, his goal is to design compelling architectural and urban planning solutions that go beyond mere functionality and become integral experiences that connect the intricacies of each project at a deeper level and positively impact our society and the environment.

He has been a visiting professor at the Southern California Institute of Architecture (SCI-Arc) in L.A., the Institute for Advanced Architecture of Catalonia (IACC) in Barcelona, the University of Pennsylvania (UPenn) and the Aalto University, Finland.

Rojkind has participated as juror for several international awards and competitions and has lectured in many different countries.

The New York Times named Michel Rojkind as part of “A Generation of Architects Making Its Mark at Dizzing Speed” in 2017. Some of the most meaningful commendations Rojkind has received are from his native country named as one of the “300 most influential Mexican Leaders” by the Mexican Leaders magazine (2017 & 2018). In 2010, Rojkind was named as one of the “Country’s Treasured Architects” by the Mexican Civil Registry. Michel Rojkind has currently joined The We Company as Senior Vice President of architecture, leading all of WeWork construction projects.