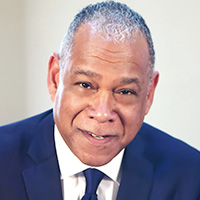 Mitchell Silver became Commissioner of the New York City Department of Parks in May 2014. Commissioner Silver is past president of the American Planning Association (APA) and is President-Elect of the American Institute of Certified Planners. Mitchell is an award-winning planner with over 35 years of experience. He is internationally recognized for his leadership in the planning profession and his contributions to contemporary planning issues. As Parks Commissioner, Mitchell oversees management, planning and operations of nearly 30,000 acres of parkland.

One of the nation’s most celebrated urban thinkers, Commissioner Silver has been elected to Planetizen’s list of the 100 Most Influential Urbanists in the world (2017). In addition, he has been honored as one of the top 100 City Innovators in the world by UBM Future Cities, and in 2012 the Urban Times named him one of the top international thought leaders of the built environment.