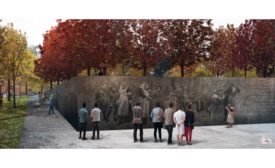 WWI Centennial Commission Selects "The Weight of Sacrifice" for Memorial in Washington, D.C.

The United States got in and out of World War I in well under two years. The U.S. World War I Centennial Commission hopes it can move as quickly. Yesterday, it chose a design for the National World War I Memorial by Joseph Weishaar, a 2013 graduate of the Fay Jones School of Architecture at the University of Arkansas.

Fred A. Bernstein
No Comments
With the selection of five finalists for its memorial competition, the United States World War I Centennial Commission seems to be moving closer to a showdown with preservation groups.
Read More

Fred A. Bernstein
No Comments
A design proposal called Remembrance and Reflection. The rules of an architecture competition can affect which design wins and even how it is received. That’s why opponents of the controversial Dwight D. Eisenhower Memorial fault not just Frank Gehry’s design but the format of the competition that led to its selection.
Read More
More Videos