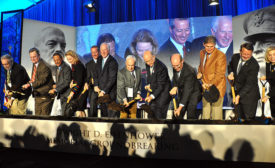 After years of contentious legislative battles, a fitting tribute to “Ike” is set to begin construction. 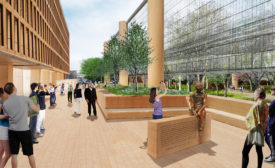 The revised design will be presented on January 23 to the U.S. Commission of Fine Arts. 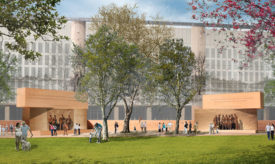 When the grandchildren of Dwight D. Eisenhower approved a compromise design last week, it seemed likely that Frank Gehry’s memorial to the 34th president would finally get built—perhaps even in time for the 75th anniversary of D-Day, on June 6, 2019.

Fred A. Bernstein
No Comments
A design proposal called Remembrance and Reflection. The rules of an architecture competition can affect which design wins and even how it is received. That’s why opponents of the controversial Dwight D. Eisenhower Memorial fault not just Frank Gehry’s design but the format of the competition that led to its selection.
Read More

Amanda Kolson Hurley
No Comments
According to the presentation given at the National Planning Commission Meeting on Thursday, Gehry's new design does not include the east and west tapestries. At its monthly meeting on September 4, the National Capital Planning Commission (NCPC) heard an update on Frank Gehry’s embattled design for the Dwight D. Eisenhower Memorial in Washington, D.C. Craig Webb of Gehry Partners presented a revised design with significant differences from the one the commission rejected, by a vote of 7 to 3, back in April. Two of the three metal tapestries that formed Gehry’s most distinctive architectural move are gone. There are now
Read More

Ben Adler
No Comments
Image courtesy EMC Writing on her blog on October 29, Susan Eisenhower, a granddaughter of President Dwight Eisenhower, endorsed President Obama for re-election. Even though the blog post made no mention of her high-profile opposition to Frank Gehry's design for the national memorial to President Dwight Eisenhower, Susan Eisenhower's endorsement could have more effect upon that fight than the one for the White House. Eisenhower is, like her grandfather, a lifelong moderate Republican. In 2008, reacting to the GOP's rightward drift, she became an independent and endorsed Obama. Perhaps not coincidentally, the Obama administration has been receptive to Eisenhower's concerns
Read More
Subscription Center
More Videos