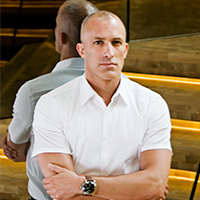 Joshua Ramus is founding principal of REX, an internationally acclaimed architecture and design firm based in New York City, whose name signifies a re-appraisal (RE) of architecture (X). Seminal projects include the Ronald O. Perelman Performing Arts Center at the World Trade Center in New York; the new performing arts center for Brown University in Providence; the AT&T Performing Arts Center Dee & Charles Wyly Theatre in Dallas; the Vakko Fashion Center & Power Media Headquarters in Istanbul; and the Seattle Central Library. Joshua led the latter project while founding partner of OMA New York, the firm he rebranded as REX in 2006.

In 2016, Joshua was the first American recipient of the Marcus Prize, conferred by the Marcus Corporation Foundation and the University of Wisconsin-Milwaukee upon architects “on a trajectory to greatness.” He has also been credited as one of the “5 greatest architects under 50” by The Huffington Post, one of the world’s most influential young architects by Wallpaper*, one of the twenty most influential players in design by Fast Company, listed among “The 20 Essential Young Architects” by ICON magazine, and featured as one of the “Best and Brightest” by Esquire.