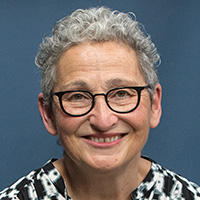 Julie Eizenberg, FAIA, is a founding principal of Koning Eizenberg in Los Angeles and holds a B. Arch from the University of Melbourne and an M. Arch from UCLA. She brings design vision, leadership, and expertise in working with cities, non-profit agencies, institutions and private developers to generate inventive master plans and public places, and she has reshaped the way we think about conventional building typologies. Under her leadership, Koning Eizenberg has earned over 160 design and sustainability awards and been widely published. Koning Eizenberg has been named AIA California’s Firm of the Year, and she and founding partner Hank Koning were awarded the 2019 Australia Institute of Architects Gold Medal. Julie, who teaches and lectures around the world, was awarded an Honorary Ph.D in Architecture from the University of Melbourne. Her most recent book, Urban Hallucinations, looks at the philosophy of a practice that aligns humanist values with inventive architectural form making.