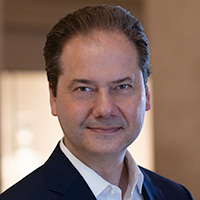 Appointed Director of The Metropolitan Museum of Art in April 2018, Max Hollein will add to his title Chief Executive Officer in July of this year. He is responsible for guiding the museum's artistic vision and all of its programming, research, and collection initiatives. Over the next decade, he will lead the museum into the future as one quarter of its gallery system and narratives will be renewed, refreshed, and recontextualized. An accomplished director for 20 years, Hollein oversees The Met's curatorial, conservation, and scientific departments; exhibition and acquisition activities; education and public outreach; as well as the libraries, digital projects, publications, imaging, and design. Prior to joining The Met, he was the Director and CEO of the Fine Arts Museums of San Francisco, where his tenure was characterized by visionary programming, pioneering acquisitions, and rigorous fiscal management. Previously he simultaneously led the Schirn Kunsthalle, the Städel Museum, and the Liebieghaus in Frankfurt, Germany, as Director and CEO, all of which experienced significant growth and increased attendance during his tenure.