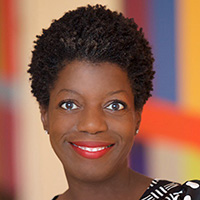 Thelma Golden is Director and Chief Curator of The Studio Museum in Harlem, the world’s leading institution devoted to visual art by artists of African descent. Under her leadership, the Studio Museum has gained increased renown as a global leader in the exhibition of contemporary art, a center for innovative education, and a cultural anchor in the Harlem community. Her tenure as Director has been characterized by a deep commitment to planning for the Museum’s future. In 2015, the Studio Museum announced plans to create a new facility on its current site in Harlem. In 2010, President Barack Obama appointed Golden to the Committee for the Preservation of the White House, on which she served from 2010–2016. She currently serves on the Board of Directors for the Barack Obama Foundation and the Los Angeles County Museum of Art. She is a 2008 Henry Crown Fellow at the Aspen Institute, and in 2016 received the Audrey Irmas Award for Curatorial Excellence from the Center for Curatorial Studies at Bard College. In 2015, she was appointed as a Ford Foundation Art of Change Visiting Fellow.