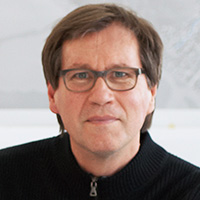 Since founding Thomas Phifer and Partners in 1997, Thomas Phifer has completed a number of cultural projects including expansions for the Glenstone Museum in Maryland, the Corning Museum of Glass in New York, and the North Carolina Museum of Art in Raleigh. Currently under construction are the Museum of Modern Art and TR Warszawa Theatre in Warsaw, Poland. Since 1997, Thomas Phifer and Partners has received more than thirty honor awards from the American Institute of Architects, as well as numerous national and international citations. Phifer received the prestigious Rome Prize in Architecture from the American Academy in Rome in 1995, and was awarded the Medal of Honor and the President’s Award from the New York Chapter of the American Institute of Architects. In 2019, Phifer received the National Design Award in Architectural Design from the Cooper Hewitt Smithsonian Design Museum. In 2022, he was elected as a lifetime member of the American Academy of Arts and Letters.