By Miriam Sitz
Operating on the fringes of architecture, landscape design, and planning, Conor O’Shea’s firm, Hinterlands Urbanism and Landscape, takes a high-level look at exurban areas surrounding cities. Founded in January, the one-man-shop’s work focuses on these hinterlands—places just beyond the borders of major urban centers like Chicago—and is almost entirely speculative. “It would be great to have built work,” says the 30-year-old, “but I hope I’m still always also conceptual. I want to make sure the ideology stays pure.” 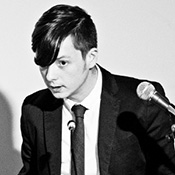 Photo courtesy IIT College of Architecture
For the Biennial, O’Shea is pushing the envelope on research he started while at Harvard’s GSD. The project Logistical Ecologies examines transportation infrastructure and the movement of goods, considering how these respond to and interact with the existing infrastructure and ecology of an area. O’Shea’s calculus for this and any project takes into account biodiversity, agricultural production, and hydro­logical events. “There’s a lot going on independently in those three categories,” he says, explaining how factors like the reintroduction of American bison into Northeastern Illinois or increased flooding in the Fox River Valley affect infrastructure and planning decisions. “The idea is to tie them all together in a way that’s productive economically but also ecologically, to create a new urbanization plan for northeastern Illinois.”

On a single wall, O’Shea and his collaborators incorporate drawings and aerial photography with advanced GIS mapping and animation to present a new way to think about the future of the region. The Hinterlands founder teaches at the Illinois Institute of Technology (IIT) in the Master of Landscape Architecture program and often finds his work in academia complementary to his firm’s research. “We’re using both platforms to push dialogue about urbanism forward,” he says, “and to test and challenge the existing frameworks that we use to think about cities.”