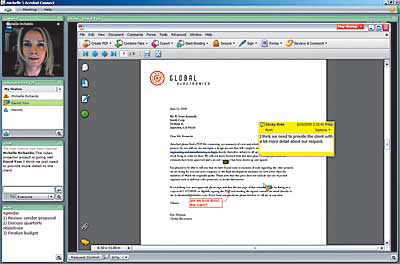 The PDF file format continues its dominance of the portable file market with the release of an updated version of Adobe’s Acrobat, now in version 8, and the launch of a reconstituted edition of the Internet conferencing software Breeze, now called Adobe Acrobat Connect.

Acrobat 8 Professional fine-tunes many of the software’s standard features, adding the ability to create a single PDF out of multiple files, as well as streamlining the software’s look. Additionally, you can add comments to files in a shared review setup, when files are located on shared servers, and garner instant feedback from collaborators who may only be using Adobe’s Reader 8.

While conferencing software and Web sites are nothing new, Connect’s reliance on a backbone of Adobe’s Flash Player—a free, downloadable program Adobe recently acquired—means only one party actually needs the Connect software to host a meeting. Patrick Aragon, an Adobe representative, says the acquisition of Flash Player was key since the program already exists on most computer desktops.

Connect operates over the Web, so videoconferencing is instantaneous; the professional version even delivers Voice over Internet Protocol capability. You simply type in a conference URL and join the meeting. Adobe offers two different cost structures, depending on whether Adobe or your company hosts the connection. If you host, the fee depends on the number of users and overall usage. If Adobe hosts, it’s a yearly fee of $395 with $39 monthly charges per virtual meeting URL. Having Adobe host the site frees your company’s bandwidth, which makes this particularly helpful for smaller offices.

Like Acrobat, this version of Connect isn’t specifically tailored to the a/e community, but both programs include a number of bells and whistles for designers. For example, you can take a DWG file, and even without AutoDesk’s AutoCAD on your computer, you can drop the file into Acrobat 8 and create a PDF that would be viewable in Connect. That’s handy for project managers with laptops on the road. Still, Connect isn’t the program to use if you’re interested in revising drawing files in a live process, but since making a PDF is now push-button fast in everything from CAD programs to Microsoft Word documents, hashing out the details of an expansion joint with your contractor would be well within your reach.