The first hint that there is something unusual about the new outdoor swimming pool at Borden Park in Edmonton, Alberta, is what isn’t there—that insidious but telltale odor of chlorine. This is because the 64,000- square-foot recreational complex, which includes a sandy beach, changing rooms, and plenty of space to soak up the sun, is Canada’s first “natural” public swimming facility. Instead of using chlorine or other chemicals for disinfection, it relies on the cleansing capabilities of sand, gravel, and carefully selected aquatic plants and organisms.

And the architecture provides its own subtle clues that something is different here. Natural materials are combined with a minimalist expression and inventive details to give the Borden Park Natural Swimming Pool a refined toughness not normally associated with a neighborhood swimming hole.

Designed by gh3 architecture, a Toronto firm whose practice encompasses both landscape and buildings at a range of scales and types, the $11 million project comprises two concrete pools that at first glance seem mostly conventional: a small, shallow one for toddlers, and a much larger, deeper one for older children and adults. Both are rectangular, with white bottoms and sides. But they are part of a planar landscape. Regardless of the depth, the water’s surface is flush with the deck all along the pools’ concrete perimeter, which in turn is level with the expanses of sand and other areas finished in wood plank.

This plinth-like zone is defined by gabion walls of local limestone that enclose a long, low-slung building along the site’s eastern edge housing reception, staff areas, and a snack bar, along with the changing rooms. The porosity of the stone walls—mortarless and held together by metal cages—is a reference to the filtration process that purifies the water, says Pat Hanson, a gh3 partner. Although the construction method was famously used at Herzog & de Meuron’s late- 1990s Dominus Winery, in California’s Napa Valley, it is most commonly used for retaining walls and other civil engineering applications, rather than buildings. Here in Edmonton, the permeable gabion walls seem especially appropriate for a seasonal pavilion, one without a mechanical heating or cooling system, Hanson points out. Not only do they facilitate natural ventilation, but the thermal mass provided by their 3-foot depth helps moderate temperatures within the building and just outside it, on the pool deck. 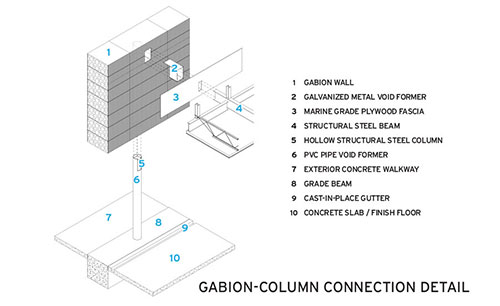 To accentuate the walls’ heft and materiality, the gh3 team has deployed a number of visual sleights of hand. Within the stacked limestone, the architects have concealed the true vertical support system of hollow-section steel columns, allowing the enclosure to read as weight-bearing. They extended the door and windows the full height of the stone-filled 12-foot-tall cages (nearly 3 feet above the interior’s ceiling), framed them in steel plate, and pushed the glass far into the openings. The assembly is topped with a cap-like parapet, only 4 inches high, belying the roof’s actual thickness. This set of decisions produces a quiet, crisp-edged structure punctuated with deep shadows. “The details highlight the elemental, rectangular form,” says Hanson.

The idea for a chemical-free pool in Edmonton came from residents of the neighborhoods surrounding the 54-acre Borden Park, located 2.5 miles northeast of downtown and known for its meandering paths and mature shade trees. Aware of the natural-pool movement—which first gained traction in Austria in the 1980s and later spread to Germany and elsewhere in Europe—they wanted to replace the park’s rundown, 1950s-era pool with an unchlorinated one.

gh3, which has completed several projects in Edmonton as part of the city’s design-excellence program, turned to Polyplan, natural-pool specialists based in Germany, for help devising the treatment and filtration process. The system includes a set of regeneration basins at one end of the pool deck, visible to patrons but protected by glass, and an adjacent bed of crushed granite concealed behind the building’s gabion walls. Overflow from the pools circulates through these filtering elements, which contain marsh-loving plants such as cattails, water lilies, and rushes—and, in the case of one of the basins, microscopic marine animals. The plants and organisms use the contaminants that humans introduce, like carbon dioxide, nitrogen, and phosphates, as nutrients and remove them from the water.

The water is heated, but only to about 74 degrees, and then the sun is allowed to take over. But if the temperature of the water should rise above 84 degrees (something that has yet to happen at the pool, now in its second season of operation), the facility would temporarily close, since that is the temperature considered conducive to bacteria growth.

To avoid overloading the system, the number of bathers is limited to 980 per day, with a maximum of 400 at one time. Swimmers are also asked to follow rules that include a soaking shower—courtesy of tubelike chrome fixtures lined up along the exterior of the stone walls—before entering the water, and refrain from using certain sunscreens containing ingredients that can provide too many nutrients for the filters’ aquatic life. “The pool is a balanced ecosystem, and people are part of it,” says facility manager Cyndi Schlosser.

Schlosser and her staff follow a protocol specifically devised for the Borden Park pool to satisfy the provincial government health department’s concerns. The regimen includes testing for potentially dangerous pathogens several times per week, both on-site and by an outside lab.

What is the pool like to swim in? On an overcast and chilly day earlier this season, the water was clear, refreshing, and cool. It had no briny taste, like ocean water or the sometimes fishy smell of lake water, making the experience feel a little like a dip in a pond, albeit one that has a rectilinear shape and no mud at the bottom. And, afterward, there are none of the usual side effects of chlorine—no raw eyes, itchy skin, or strawlike hair. Without these annoyances, it is possible to relax on the deck and look at the tops of the park’s trees peeking out from behind gh3’s robust but elegant gabion walls, creating a true amalgam of architecture and nature.