This website requires certain cookies to work and uses other cookies to help you have the best experience. By visiting this website, certain cookies have already been set, which you may delete and block. By closing this message or continuing to use our site, you agree to the use of cookies. Visit our updated privacy and cookie policy to learn more.
Home » Rockefeller University River Campus by Rafael Viñoly Architects
Buildings by TypeCollege and University Projects

“We’ve added 160,000 square feet of new space, and you can’t see any of it, making it one of our best buildings,” jokes Jay Bargmann, senior vice president at Rafael Viñoly Architects (RVA). He is referring to the firm’s expansion of Rockefeller University, the highly regarded biological- and medical-research institution that occupies a verdant campus along the East River on Manhattan’s Upper East Side.

The approximately $500 million endeavor, which has a cumbersome formal name—The Stavros Niarchos Foundation-David Rockefeller River Campus at The Rockefeller University—consists primarily of new laboratories. But the project, which totals 220,000 square feet, also includes new administrative offices, a dining commons, a conference center, and renovations to existing laboratories and offices. And as Bargmann’s remark indicates, the expansion is mostly hidden, at least as one approaches from the existing campus, concealed under two acres of inviting roof gardens. The camouflaged structure, which stretches the equivalent of four city blocks along the river, provides a sharp (and ironic) contrast to another of the firm’s recent New York projects—432 Park Avenue—a pencil-thin skyscraper located less than a mile away that, for the moment at least, is the world’s tallest residential tower, at 1,397 feet high.

The institute was able to pull off its disappearing act because it owned air rights over the FDR Drive—a six-lane highway at the river’s edge that once defined the now 16-acre campus’s eastern boundary. The rights were granted by the city in the early 1970s to the university and nearby hospitals, all of them hemmed in and cut off from the water by the often-congested roadway. To take advantage of its virtual real estate, RVA, its consultants, and the construction team devised a solution that depended on sophisticated engineering, off-site fabrication, and hair-raising acrobatics: during the summer of 2016, 19 prefabricated steel-framed modules, each unique and weighing up to 800 tons, were lifted from a river barge out over the roadway onto already placed columns and foundations (see sidebar).

The resulting long and low structure is of course not entirely invisible. Two curvilinear glass pavilions—one for the dining facilities and the other for the offices—pop up from the gardens that cover two levels of labs below. At the northern end of the extension and at a lower level, a glass-box conference center adjoins a broad lawn. (The roofs of the three protruding elements will eventually themselves be covered with sedum, in part because they are visible from nearby towers.) The arrangement is a continuation of earlier campus planning strategy, says Bargmann. The Rockefeller grounds, which include traditionally classical structures dating from the early 20th century, and midcentury additions by such firms as Harrison Abramovitz, appear as isolated objects surrounded by a Modernist landscape by Dan Kiley that includes leafy malls, courtyards, and water features. While the older buildings appear to be separate, explains Bargmann, many are connected below grade.

RVA’s contribution to the campus is best understood from the shoreline of Roosevelt Island in the East River, opposite the university. From that vantage point one can clearly see the two stories of labs stretching along the FDR on Y-shaped columns, the building’s sleek and subtly arced form accentuated by horizontal brisessoleil that shield the glass curtain wall. The basic outlines of this scheme, including its long and low organization over the highway, were determined in an earlier master-planning phase led by RVA. Although zoning would have permitted a vertical solution, the idea of a tower didn’t have much appeal, says Timothy O’Connor, the university’s executive vice president. Not only are labs in high-rises difficult to rearrange as research needs evolve, he says, they also can hinder collaboration among different teams. “Scientists with workspaces in tall buildings tend to take the elevator to their labs and stay there.”

With the goal of encouraging interaction among researchers, both organized and spontaneous, the new facility has open-plan floors, each about 740 feet long and divided roughly in half by a lounge space for informal meetings, relaxing, or group study. The areas to the north and the south are organized so that specialized equipment requiring enclosed rooms is located along the wall adjacent to the existing campus, and write-up desks, where scientists work at computers, are positioned along window walls facing the water. The zone in the middle of the roughly 90-foot-deep floor plates is devoted to the lab benches. These sit on top of a raised floor, below which runs the extensive infrastructure essential for scientific research, including that for power, data, and gas. The casework and the floor system are designed on a 2-foot by 2-foot grid so that the research spaces are “plug and play” and readily reconfigurable, explains Bargmann.

This layout is smart and functional, but what makes the scheme stand out is the way it takes advantage of the proximity to the river. Floor-to-ceiling glass gives the scientists a view of the water’s constantly changing surface and reflections, and, because the ceiling heights step up from 8 feet at the west to 18 feet near the river, daylight penetrates deep into interior (automated roller blinds activate to prevent direct morning sun from creating visually uncomfortable conditions). Appropriately utilitarian and durable finishes, including rubber flooring and carpet tile, are all light-colored to enhance the airy and open feeling.

The planning of the new outdoor space—which sits at an elevation about 20 feet above the original campus, to accommodate the laboratory floor-to-floor heights and the required clearance above the FDR—also capitalizes on the river. “Placing trees at the edge of the gardens, along the water, seemed wrong,” says Signe Nielsen, principal of MNLA, the project’s landscape architect. Instead, the perimeter of the lab building’s roof is devoted to a balustrade-protected pathway. This approach allows Rockefeller community members and staff of the neighboring hospitals (the campus is not accessible to the public) to enjoy unobstructed views, but it also acknowledges the exposed nature of the new real estate, which has a completely different microclimate from that of the more sheltered, older part of the university grounds, points out Nielsen. The newly planted trees, including Japanese black pines, are pulled away from the roof’s edge, and have small leaves, so they aren’t prone to toppling over in strong winds. Throughout, there are spots to sit and relax, including an amphitheater sunk below the garden level and benches integrated into the edges of the planting beds.

In creating a low-rise, horizontally oriented laboratory building disguised by landscape, RVA has added new space for cutting-edge research and for scientific collaboration, both indoors and out. And it has ingeniously—and somewhat counterintuitively—managed to integrate its addition into the existing campus while completely, and nearly invisibly, transforming it.

Back to More than Academic: Colleges & Universities 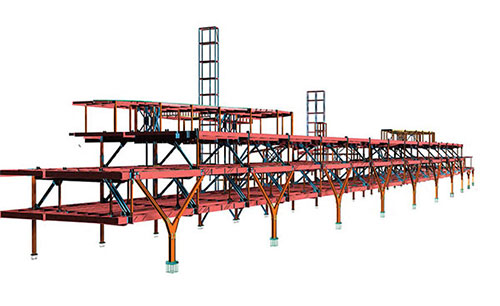 On 19 nights in the summer of 2016, erectors swung steel-framed modules, each weighing more than 500 tons, from a barge moored in the East River and set them into place over New York’s FDR Drive. The elements, prefabricated at a New Jersey wharf, would form the bridgelike skeleton of what was to become a 160,000-square-foot laboratory expansion of Rockefeller University.

The FDR—the heavily traveled roadway that runs along the east side of Manhattan—was closed for each performance of the high-flying acrobatic act, conducted during the wee hours. But the scheme nevertheless required extensive logistical planning, careful coordination, and sophisticated engineering.

A number of factors made prefabrication with erection from the water a good choice for the project, explains Sherry Yin, an associate principal with Thornton Tomasetti, the project’s structural engineer. These included a difficult-to-access site with limited staging area and the possibility of minimizing construction disruptions.

Engineers and contractors had to carefully analyze the modules to maximize efficiencies while balancing the limits of what could be safely transported by water and lifted by crane over the highway. For instance, the preassembled modules—all different but each about 50 feet tall and 90 by 45 feet—arrived at the site almost completely framed, including the V portion of Y-shaped columns now visible on the new building’s eastern facade, vertical columns, braces, and beams. Sprinklers were installed at the fabrication yard, but ductwork was omitted, since the addition of sheet metal would have made the modules too heavy, says Jay Bargmann, senior vice president of Rafael Viñoly Architects. Similarly, concrete slabs were partially poured in advance to create the structural diaphragms necessary for erection, says Yin, but were completed after placement. 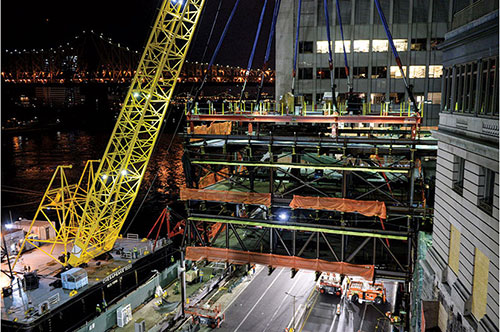 The building’s steel frame (top) was prefabricated in 19 modules in New Jersey, transported to the site by barge, and craned into place over the highway at night.

Stability during the delicate lifting operation was also a concern. The engineers studied the center of gravity of each module to ensure it would match that of the hoist rigging and avoid any significant eccentricity, says Yin. And, since the East River is a tidal estuary, the lifting maneuver could only be performed during slack conditions, when the water was still, narrowing the already limited time frame for the transfer.

Tim O’Connor, the university’s executive vice president, calls the approach “audacious,” and says that the 19 nights when the modules were installed were especially “nerve-racking.” But the payoffs were substantial. According to team members, the strategy shortened the project schedule by a year and shaved $20 million from the $500 million budget when compared to a conventional stick-built process.

The House by Handel Architects at Cornell Tech