“Claude Parent Oblique Narratives No. 1" is on view at Gallery a83 until July 3

Back in 1963, French cultural theorist Paul Virilio called Parisian architect Claude Parent’s attention to a vertiginous spatial experience he had encountered in a World War II German bunker that had surfed down an embankment onto a beach in France. What had been a right-angled, battle-ready structure was now oblique, the walls, ceilings, and floors slanted.

The tilt produced a thrilling effect on the body, suddenly alert to every step in an angled, topsy-turvy world. Partners in the firm Architecture Principe, the two based their 1966 pamphlet, “The Function of the Oblique,” on this discovery, publishing a manifesto that coincided with Robert Venturi’s “Complexity and Contradiction in Architecture.” Theirs however offered complexity and contradiction of a different sort, based on physical experience rather than language, with an influence that arguably outlasted the book that yielded Post-Modernism.

Gallery a83, a new, daring experimental architecture gallery in New York, has just opened a show of Parent’s drawings, “Claude Parent Oblique Narratives No. 1,” curated to introduce the subject of the oblique to an audience occupying Manhattan’s vertical world (through July 3).On two rows of easels, themselves angled on the oblique and looking, in miniature, like one of the oblique cities that Parent himself draws, gallerists Owen Nichols and Clara Syme (they are both practicing architects) display large-format pencil drawings by Parent, who died in 2016. 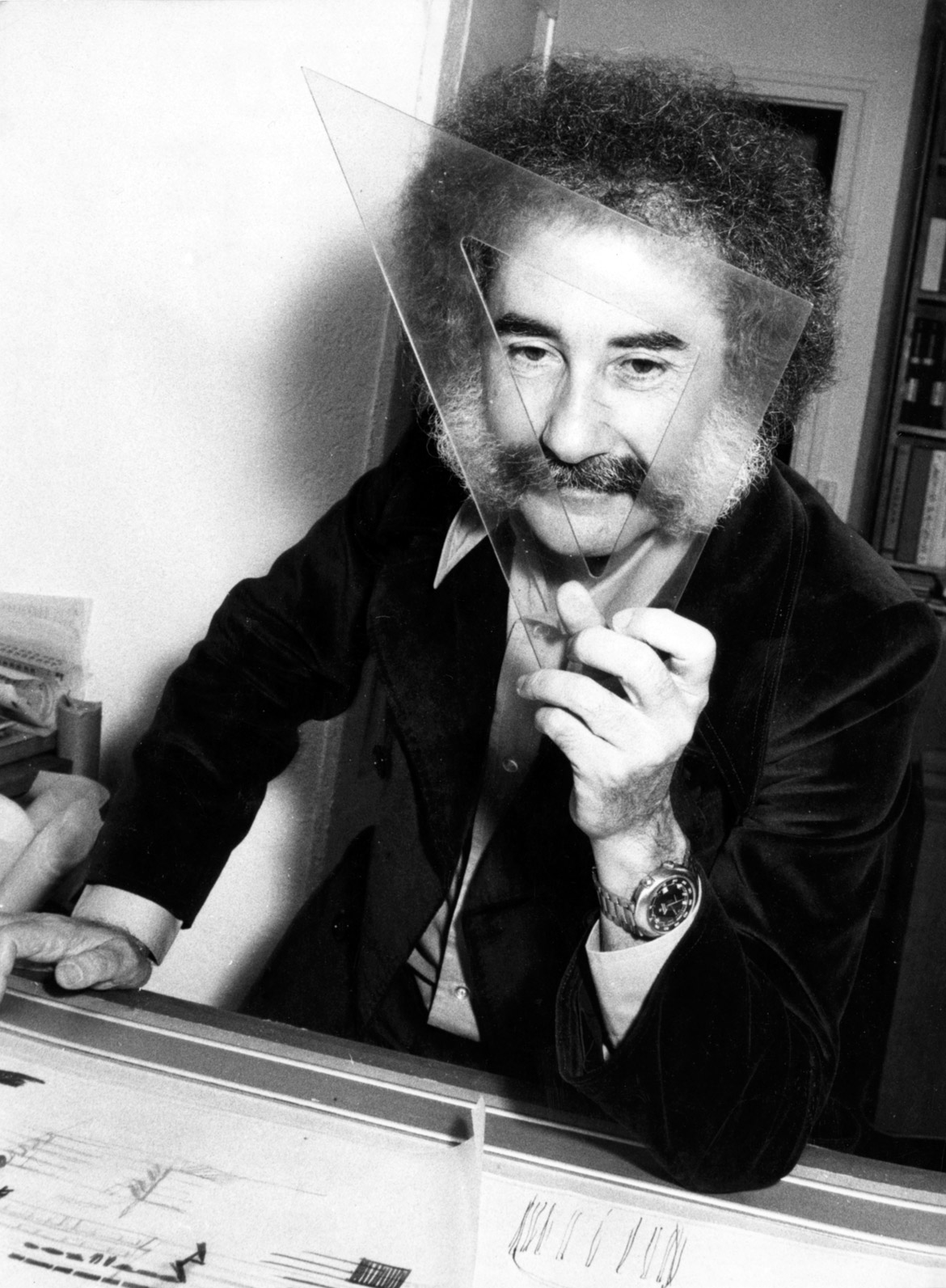 The easels themselves are set on flat files containing drawings. As visitors pull drawers out, a rumbling, rolling noise gives the gallery a John Cage soundtrack. The show creates the ambiance of archives in a reading room. The files are themselves set on red metal sawhorses, forming a clever tripartite structure of easels, files, and base. Nichols and Syme designed the installation with great economy and elegance on a next-to-non-existent budget.

The 44 pencil drawings in the drawers and on the easels are organized by series. One of the earliest, from the 1980s, called “Rage,” shows skyscrapers attacked and cracked open by buildings flying on the oblique, introducing fracture as well as the oblique into a new, complex architectural vocabulary. Some oblique structures attack horizontal blocks. The new order challenges both the rigid modernist vertical order and the classical horizontal order, establishing fresh ground on which to predicate architecture.

Another series, The Barge, is less architecturally confrontational. Well-mannered and dapper in his Issey Miyake jackets, Parent was, despite a posh background, both subversive and eccentric, and willing to chance his career on an idea. He owned a beach house in Brittany, named Sissable, set in a ghostly white landscape of salt flats, populated by flat-bottom boats used for collecting oysters. In this surreal landscape, which confirmed an idiosyncratic view of the world, the architect transformed in his drawings the barges moored out front into buildings, many set in conjugal geometries that find their ecstasies on the oblique (the static yielding to the ex-static).

Parent, born in 1923, was the rare survivor of several French paradigms: his Beaux Arts education; France’s own home-grown and pervasive Cartesianism; and Le Corbusier, whose functionalist “architecture-is-a-machine-for-living-in” dominated so much of the 20th century French thoughtscape (Parent actually apprenticed with Corbusier for a short time). 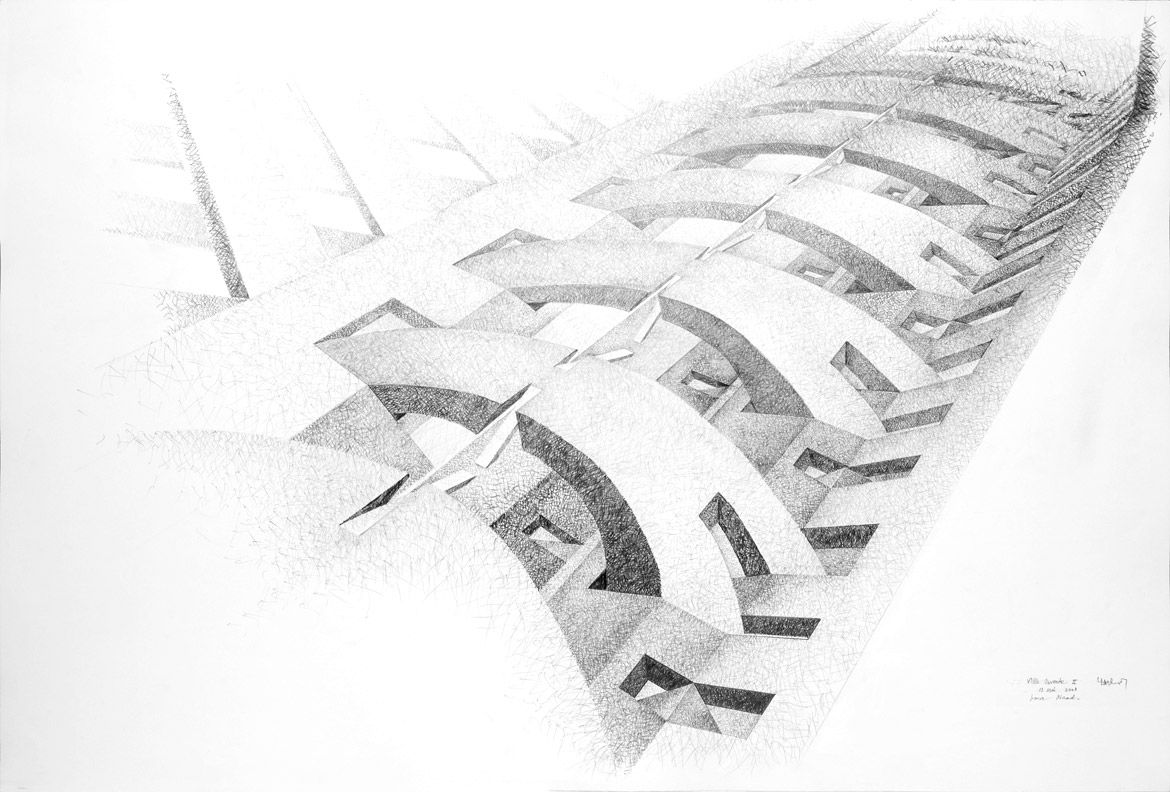 Against this fortress of rationalism, the oblique had an uphill battle which Parent waged, counter-intuitively, with a pencil trained in traditional drawing techniques. Parent only cursively used hard-edged tools like the triangle or ruler to outline a drawing, but otherwise built his oblique visions in textures penciled without lifting the pencil tip from the paper. Parent dances the lead on the surface to create contrasts, often defaulting to a shading technique called “scumbling” in which he draws spidery lines in tiny overlapping circles. The drama of massive forms cantilevered acrobatically into the infinities of white paper is achieved through a build-up of subtle textures.

The titles of his drawings—“Submerged Cities,” “Tensed Arc,” “Villa refusing the Vertical,” “Oblique Laser,” “Cut Urban Tissue”—reveal that each of his graphic speculations, one per page, explores an organizational or thematic idea. This Piranesi of France thought by visualizing ideas graphically.

The drawings, however, explore social issues beyond form. He was early to address ecology as an issue, for example, when he drew dense cities in crevasses of the earth. His concentrated urbanism liberated ground for agriculture and created way stations in the opened landscape for the mass human migrations he anticipated. 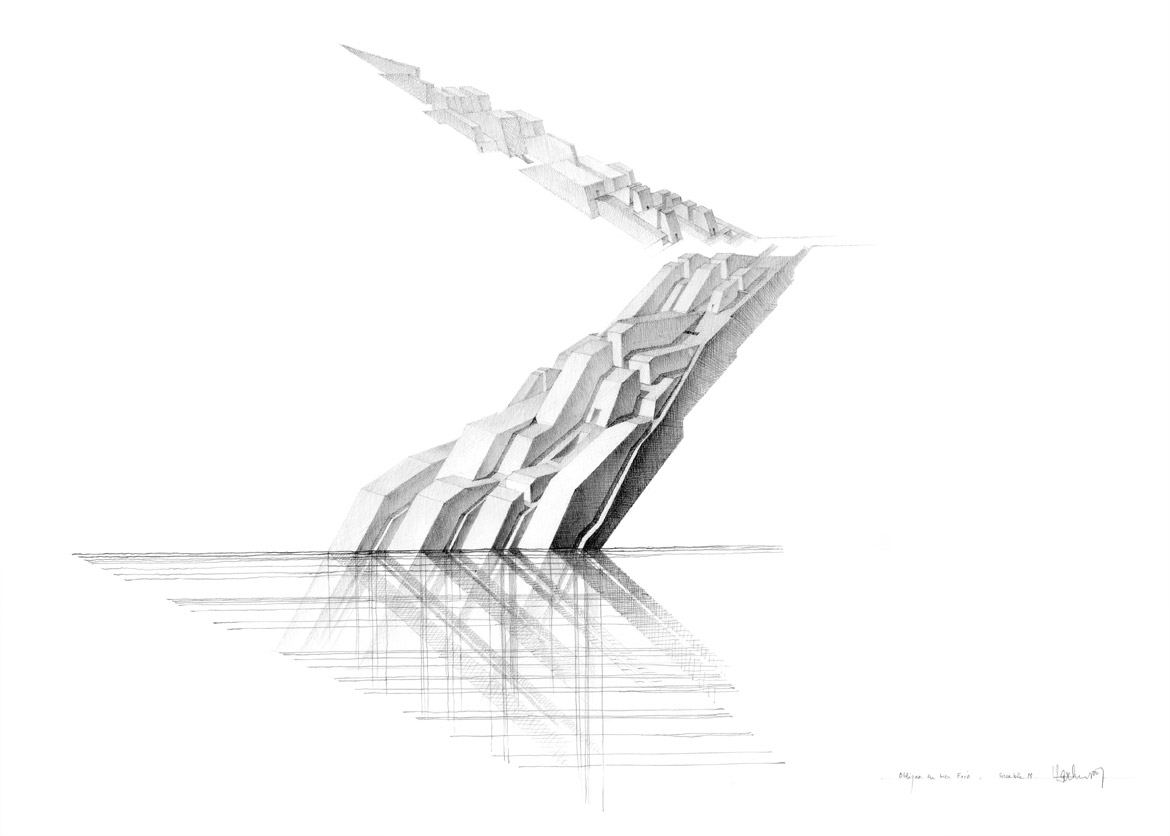 Parent’s graphic speculations take on a special meaning in the context of today’s digital design. At a time when many architecture schools no longer teach drawing, his pencil documents poetic meditations generated by the human imagination rather than the algorithms of 3D programs. His analog techniques slow design down and remove it from media cycles that are directive and homogenizing. Parent could change his vision merely by adjusting his fingers on a pencil, or just by changing a thought.

His commitment to drawing was not just a commitment to representation but to a process of discovery into what he did not yet know.