A feast for the senses, the House of Music unites the sight of the forest with the joy of listening. This exceptional work stands amid the trees of Budapest’s central City Park and was composed by Sou Fujimoto. Though based in Tokyo, the architect grew up in rural Hokkaido—he knows his way around the woods. Keen to echo the space sheltered by a canopy of trees, Fujimoto enclosed the building in glass walls and a perforated roof that exposes patches of blue sky and allows rays of light to filter down as if between leafy boughs. Fujimoto’s building is nestled among the trees (1) of City Park (2), a 302-acre green space near the center of Budapest. Photo © Iwan Baan, click to enlarge

The 97,000-square-foot project resulted from one of four simultaneous competitions held in connection with the Liget Budapest Project, an ambitious—and controversial—cultural development at the heart of the Hungarian capital. Although the historic but neglected park was desperate for refurbishing, environmentalists and others have objected strongly to trading much needed public green space for a collection of cultural facilities promoted by the central government, according to international news outlets. A Museum of Ethnography, designed by local practice NAPUR, was completed in the spring, but, due to a change in city governance (the new mayor favors the preservation of greenery over the production of buildings), the construction of a SANAA-designed New National Gallery has stalled. Fujimoto’s House of Music, which opened in January, both embraces and incorporates the park. Accessible from multiple directions, the circular structure has neither front nor back, but it does have a designated main entrance on the south side. “We wanted to open the building as much as possible to the flow of circulation,” comments the architect. Inside, the building contains three floors plus a mezzanine. Picking up where the park leaves off, the main level holds a 320-seat concert hall plus back-of-house facilities, a 100-seat lecture hall, and a café, all bound together by a free-form lobby. The mezzanine contains additional changing rooms for performers and supplemental café seating. Connected by a monumental spiral stair, the lower level houses two black-box galleries and the hemispherical Sound Dome, where up to 60 people can enjoy immersive musical experiences. The top floor occupies a slot of space sandwiched between the 23-foot-high lobby’s ceiling and the roof. It contains classrooms, an L-shaped administration area, and a library. Full-height glazing encloses the concert hall (3 & 4), allowing the audience to gaze into the park during performances. Photos © Iwan Baan The immense roof structure—the building’s dominant feature—hovers protectively over the entire building. Though it is as much as 24 feet deep in some areas, it tapers down to mere inches at its periphery and is punctured with 145 uniquely shaped openings, which diminish its mass. “Pure circles are too artificial,” explains Fujimoto. Some openings, serving as skylights for the library or small terraces for the offices, are only skin-deep. Some penetrate through to the main level, connecting the lobby directly to the sky. Others form scalloped cutouts that encircle existing trees at the building perimeter and entry plaza. Trees grow through some of the irregularly shaped openings on the building’s exterior. Photo © Iwan Baan

As in many traditional Japanese buildings, the roof extends beyond the lightweight perimeter walls, an assembly of 94 fixed insulated-glass panels. In contrast to the round roof, the irregular building footprint reflects the push and pull of the programmatic pieces and yields protected exterior space. Mediating between the park and the performance venue, the covered area incorporates the entry plaza as well as an informal open-air stage whose stepped seating tops a beer garden, an independent structure oriented outward.

Underscoring the indoor-outdoor connection, abstract metallic leaves form the roof’s underside and the main level’s suspended ceiling. Their gold surface was inspired by the decorative gilded surfaces of Budapest’s Franz Liszt Academy of Music, built in 1875. In addition to complementing the ever-changing palette of park foliage throughout the year, the color evokes the elegance and grandeur of the historic hall. “Gold creates special, ceremonial moments in the evening,” observes Fujimoto, who specified three different shades for the 30,000, aluminum-composite leaves. In between, black gaps of space add drama. They also conceal sound-absorbing material and the steel honeycomb elements that support the leaves and connect to the building’s steel-frame structure. Many of the roof’s apertures serve as skylights, several of which drill through multiple floors. Photo © Iwan Baan

In the main concert hall, where view-blocking columns were not desirable, a hefty truss holds up the ceiling. It too conceals sound-absorbing material, lighting, and technical equipment. Aside from solid walls separating the changing area, full-height, faceted glass panels secured with glass mullions enclose the entire room. Here concertgoers can gaze out at the trees in the park as the music crescendos. Behind the stage, a second layer of glass serves as sound reflection, which can be fine-tuned with adjustable roll screens. Similarly, blackout curtains can be lowered to modulate daylight.

The building’s remarkable transparency sets an informal tone, while the spectacle of the gold leaf ceiling imparts monumentality. With its overarching theme of ambiguity between inside and out, plus its staccato bursts of daylight, the House of Music brings architecture and nature into surprising harmony. 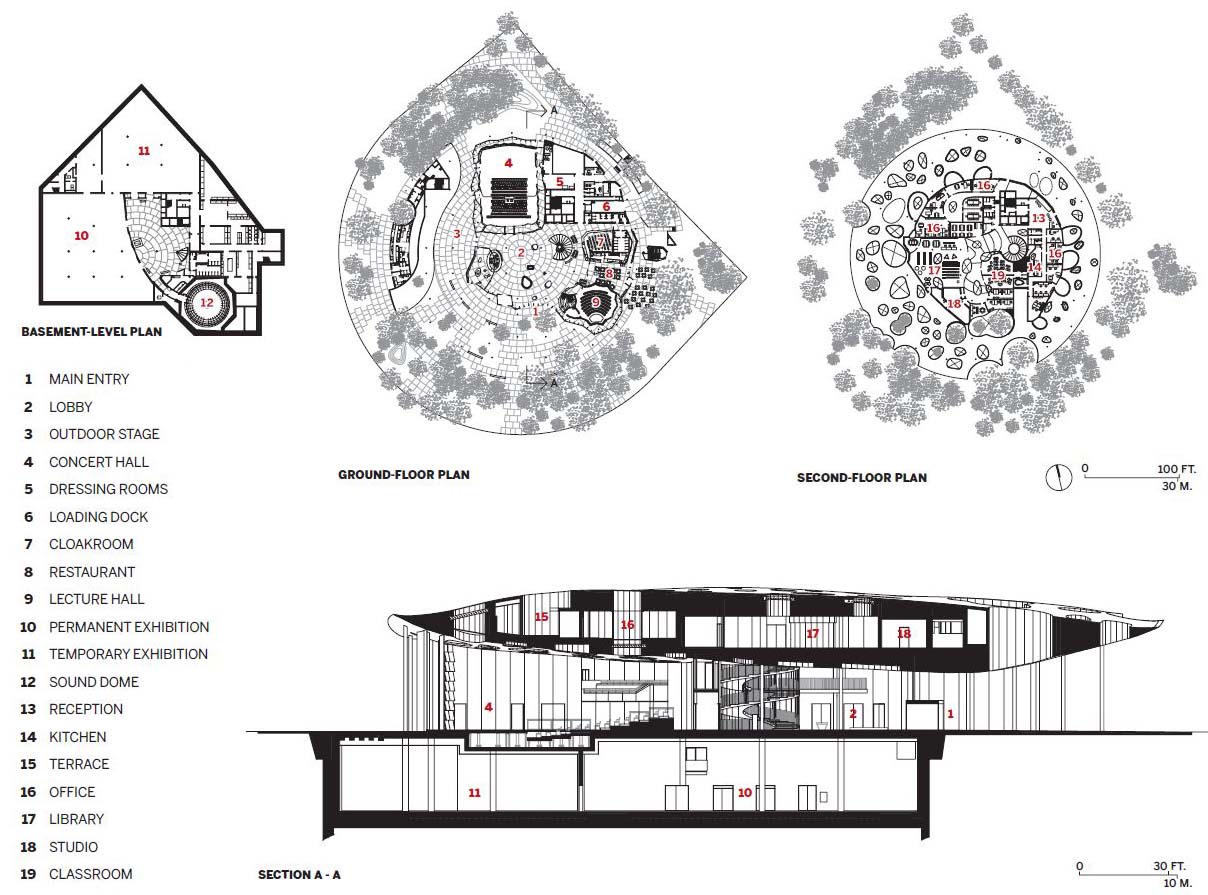 Client:
The Museum of Fine Arts Budapest and the Városliget