By David Sokol
When Charles Bower Winn donated $140,000 to the small Massachusetts city Woburn to build a freestanding public library, he suggested selecting an architect by way of a design competition. Henry Hobson Richardson won that five-entrant contest in 1877, the same year his status-making Trinity Church was dedicated in nearby Boston. Now, 129 years after the Woburn Public Library opened, its owners are hosting a competition to solicit ideas for an expansion. The competition is a precursor to an RPF the city intends to launch sometime next year. 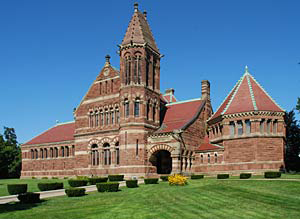 Nearly 130 years after the Woburn Public Library opened, its owners are hosting a competition to solicit ideas for an expansion. The competition is a precursor to an RPF the city intends to launch in 2009.
Image courtesy Von Grossman & Company
Commissioned just a decade and a half after he left the École des Beaux-Arts, the Woburn Public Library marked an important point in Richardson’s career, kicking off a series of libraries he would create for Malden, North East, and Quincy, all towns in Massachusetts. The Woburn design is arguably the best known and the most elaborate; its features include an octagonal exhibition room, alternating use of red Longmeadow and cream-colored Ohio sandstone on the facade, and intricate medieval motifs carved on the exterior by Welsh artisan John Evans. Architects of other libraries parroted the Richardsonian Romanesque style in their commissions, while Richardson’s influence resonated as far afield as Chicago, where proto-Modernist Louis Sullivan interpreted it in his famous Auditorium Building.

Even visionary Richardson could not have foreseen contemporary demands on the Woburn Public Library. The 50,000-volume library requires room for another 30,000 books. Plus, its children’s library occupies a basement-level space “that’s pretty horrible,” says Jessica Lohnes, former deputy director of strategic planning at the Boston Redevelopment Authority. Lohnes has been acting as a pro bono consultant to the library’s board of trustees since early 2008, and conceived the ideas competition.

The board started discussing an expansion five years ago but had reached a stalemate on how to proceed, partly because of Richardson’s design. “The building is designed all the way around,” Lohnes says, “so there is no real logical place to add onto it.” Lohnes adds that, ideally, the expansion would stress the library lawn as an open space that Woburn could use as its town common, since the original common “found its way into the middle of a traffic circle.”

Information about the competition is scheduled to debut today.. Entry details will be released on January 2, with submissions due January 23.

A jury including Lohnes, Sherida Paulsen, FAIA, Preston Scott Cohen, AIA, Praxis co-editor Amanda Lawrence, urban designer Gretchen Von Grossman, and Richardson historian Jim O’Gorman will award small cash prizes to the top three entries. While the winning concept won’t be built, per se, Lohnes expects it to inform the RFP for the library’s expansion, which should be released no later than summer 2009.