Chicago is used to throwing big architecture parties—the World’s Columbian Exposition in 1893 and the Century of Progress in 1933. It’s high time for another. The Chicago Architecture Biennial, which opens this month, will celebrate visions of the future by showcasing more than 90 young international firms. On the following pages, Architectural Record explores the built environment and the cultural and social context for this major convocation, including a commentary on the city’s contribution to the skyscraper, an analysis of public housing today, and a look at the new parks and public spaces animating urban life. 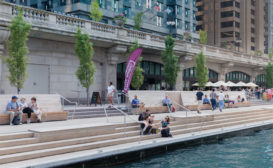 Every night, as I walk along the Chicago Riverwalk to my commuter train, I witness scenes that were unthinkable a year ago: young office workers sipping drinks at a packed wine bar, big powerboats tied up at dockside, clusters of kayaks scooting along the water. 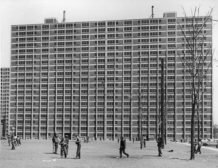 The changing face of the city's public housing.
Anna Fixsen
No Comments

In 1993, 12-year-old Rachella Thompson and 13-year-old Kimberly Davis sat down with a fistful of Magic Markers to reimagine where they lived—a 10-story high-rise in the Cabrini-Green Homes, one of Chicago’s most troubled housing projects.

'Mr. Chicago' talks about his hometown and its place in architectural culture.
Cathleen McGuigan Suzanne Stephens
No Comments

Stanley Tigerman has died at age 88. RECORD remembers the "Mr. Chicago," revisiting a 2015 interview with the architect about his hometown and its place in architectural culture. 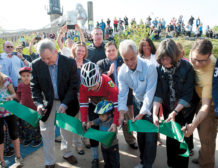 Since entering office, Chicago Mayor Rahm Emanuel (third from right) has stepped into a surge of public-space revivals, including the opening of the 606 trail in June. Chicago’s Rahm Emanuel had big—no, huge—shoes to fill when he took office in 2011. His predecessor, Richard M. Daley, was straight out of central casting—scion of a legendary Chicago mayor, more street-smart than book-smart, but nonetheless a visionary who vowed to make his once-polluted Rust Belt burg “the greenest city in America.” 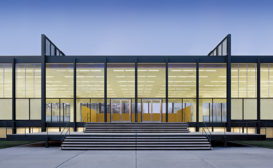 Chicago: The Place Between

A modern masterpiece collides with a literary gem—that's Chicago.
Thomas Dyja
No Comments

Skyscrapers have figured dramatically in Chicago's architectural reputation'and will play a big part in the city's future.
Suzanne Stephens
No Comments

Everyone knows that Chicago is the birthplace of the skyscraper. And it is true—depending on how you define the building type. As Carol Willis points out in Form Follows Finance: Skyscrapers and Skylines in New York and Chicago, if you go by the technological innovations of the elevator and the metal frame, then Chicago was first, but if height matters most, it was New York. 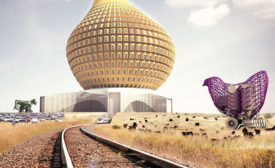 Chicago's Next Generation The inaugural Chicago Architecture Biennial (October 3, 2015 through January 3, 2016) is a global event. With over 60 firms or studios featured—representing more than 30 countries across six continents—it is also drawing attendees from all over the world. Titled The State of the Art of Architecture, the exhibition, curated by Sarah Herda and Joseph Grima, reaches beyond the national conversation to generate a larger discussion about the future of the built environment. 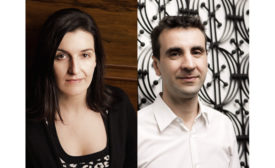 The 2015 Chicago Architecture Biennial purports to be the largest survey of contemporary architecture to hit North America to date, and leading the monumental effort as its artistic directors are Sarah Herda and Joseph Grima.