Miriam Sitz
Order Reprints
No Comments
After spending more than a decade in L.A. working for boutique design firms, on projects ranging from set design to startup offices, Kelly Bair, 38, moved to Chicago four years ago to take a tenure-track teaching position at UIC. “Toward the latter part of my time in L.A., I had started my own practice, doing a lot of typical modern residential work,” she says, “but I found it hard to combine my earlier interests in digital fabrication and speculative-research projects with these single-client jobs. Teaching allowed me to have that outlet.” 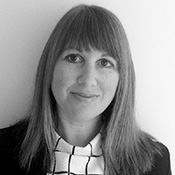 Photo courtesy Central Standard Office of Design
With one foot in academia, she founded Central Standard Office of Design (CSOD). Since then, she says, “very little work I’ve done involves the traditional, client-based mode of practice.” Her firm is research-oriented and conceptual, with installations often commissioned by gallery curators and sometimes supported by grants. UIC recently funded her research project Ancient Noveau, which looks at applications of a low-tech vernacular construction method, rammed earth, in modern architecture.

Bair’s newest work, for the Chicago Biennial, flows in that same vein. Titled Cut/Fill, it reimagines multifamily housing, maximizing both urban density and public space on vacant city blocks. Her design, which creates eight housing units on a 125-foot-square Chicago lot, where a typical developer would place just five units, relies on significant excavation and uses the displaced earth to construct walls, floors, and roofs. “With both landscape and building elements,” she says, “I thought of it as being an earth-moving project as much as an architectural project.”

Next year, for the Venice Biennale, Bair will team up with Kristy Balliet, with whom she founded Possible Mediums (along with two other partners), a collaborative of Midwestern architects and educators that organizes symposia and conferences.