This website requires certain cookies to work and uses other cookies to help you have the best experience. By visiting this website, certain cookies have already been set, which you may delete and block. By closing this message or continuing to use our site, you agree to the use of cookies. Visit our updated privacy and cookie policy to learn more.
Home » 2017 Pritzker Prize Goes to Rafael Aranda, Carme Pigem, & Ramon Vilalta of RCR Arquitectes
Architecture News

For Rafael Aranda, Carme Pigem, and Ramon Vilalta, design is a deeply communal practice. Not only do the three Spanish architects share a firm, RCR Arquitectes, they also share a single desk. “One draws a line, and another adds on,” says Pigem. It’s through this collective, iterative process that their masterful works come into being: a museum wrought in weathered steel, a translucent banquet hall punctuated by tree trunks, a kindergarten that evokes a box of colored pencils.

Now Aranda, Pigem, and Vilalta also share the 2017 Pritzker Architecture Prize. It is the first time the award has been bestowed upon three laureates in 38 years; only twice has it been given to two partners, not a solo architect. The three partners of RCR will share $100,000 and the Prize’s signature bronze medallion, based on the designs of Louis Sullivan, at a ceremony at the Akasaka Palace in Tokyo on May 20.

“The collaboration of these three architects produces uncompromising architecture of a poetic level, representing timeless work that reflects great respect for the past, while projecting clarity that is of the present and the future,” Glenn Murcutt, the chairman of the Prize’s nine-member jury, said in the announcement.

Over the span of their nearly three-decade career, Aranda, Pigem, and Vilalta have worked primarily in their native Catalonia, designing dozens of projects there, ranging from a two-Michelin Star restaurant, to a running track in the middle of a forest clearing. The work may be unfamiliar to architects practicing outside of Europe, but through their sensitive handling of context and materials, the architects of RCR have developed the uncanny ability to make the singular feel universal. “For us architecture is not a device you can use, but something that pushes your emotions,” Pigem tells RECORD.

Aranda, Pigem, and Vilalta hail from Olot, Spain a town of 34,000 cradled by a cluster of dormant volcanoes. The three architects became friends while studying at the Escola Tècnica Superior d’Arquitectura del Vallès (ETSAV), outside Barcelona. (“They heard a girl from Olot was studying architecture and they both came to meet me,” says Pigem with a laugh.) 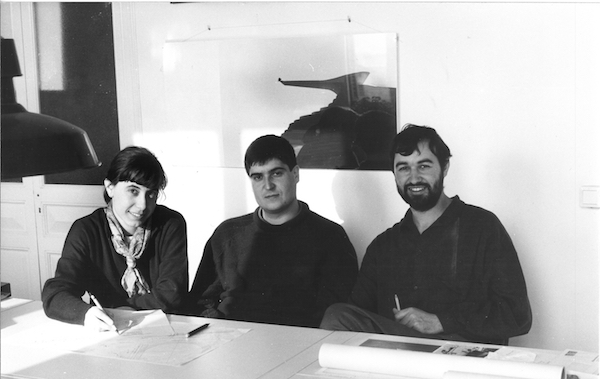 At the time, Spain was still recovering from the economic and political turbulence that followed the death of Francisco Franco in 1975. At ETSAV, it was a prime time to employ radical design ideas. “A teacher there told us, ‘If you want to be a good architect, you have to refuse the first project that will bring you a lot of money,’” Pigem recalls. Upon graduating, the three returned to Olot, eschewing the idea of establishing a big city practice. Vilalta and Pigem married, and together with Aranda in 1988, the trio established RCR, named for their first initials.

The architects took their professor’s advice to heart and boldly turned down their first would-be project. Instead, they devoted themselves to a national competition for a lighthouse in the Canary Islands. They questioned the idea of an archetypal tower and proposed a cantilevered structure that would perch on the edge of a sea cliff like an oil lamp. The proposal took first place and, though unbuilt, gained the firm international exposure.

This rigorous interrogation of a project’s essence continues to inform RCR’s work. Take their Les Cols restaurant in Olot (2002), which juxtaposed a 17th-century agrarian shell with gleaming Midas-touched interiors. Or the raw, steel gallery spaces for the Soulages Museum in Rodez, France (2014), inspired by the stormy engravings created by the museum’s namesake. When designing El Petit Comte Kindergarten in Besalú, Spain (2010), the architects observed that children often run their hands along walls as they walk, so they designed a screen made of rainbow-colored tubes that rotate and allow the children to engage with the building.

The Pritzker prize has recently gone to architects with an explicit social agenda, notably last year’s laureate Alejandro Aravena and the 2014 honoree, Shigeru Ban. The architects of RCR view their contribution to society as something more abstract: “For us, we think the social aspect of our work is a sense of quality for everybody,” says Pigem. In 2013, the firm launched the RCR BUNKA Foundation, which hosts architecture workshops and public lectures in Olot. “Sometimes architecture is perceived only as landmarks,” Pigem says. “We wanted to create this foundation to help society understand the value of architecture.”

The firm sees the Pritzker prize as the ideal platform to support the goals of their firm—currently a group of twelve—as well as their foundation. “We feel really honored and happy, but we also feel as though we have a responsibility,” says Pigem of the win. “It’s a dream coming true.” She pauses: “No, being true.”