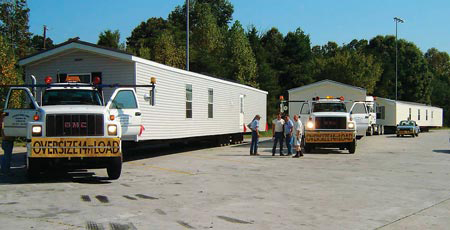 After scattering around the country and being placed in emergency shelters, hurricane evacuees are now in need of more permanent housing.

The Federal Emergency Management Agency (FEMA) has ordered 100,000 two-bedroom mobile homes and recreational vehicles from manufacturers across the country to house an estimated 300,000 evacuees, says James McIntyre, a FEMA spokesman in Baton Rouge, Louisiana. They expect to order an additional 200,000 units, with approximately 30,000 units opening per week, which may house people for two to five years. Bechtel National, Fluor, Shaw Group, and CH2M HILL Companies were all awarded FEMA contracts under what FEMA called a "limited competition," essentially no-bid arrangements that assure predetermined profits.

Some have indicated that decommissioned military bases may be used for the trailer parks, and Engineering News Record reports that FEMA is also considering using United States Department of Agriculture campground sites. The units will be deployed to these sites from four staging areas in Texas, Mississippi, Alabama, and Louisiana.

Critics in Congress, including House Minority Leader Nancy Pelosi (D-California), contend that the no-bid contracts, similar to the ones used to rebuild Iraq, lack incentive to control costs. (A FEMA spokesman said the agency has the experience to make sure the money is efficiently spent.) Meanwhile, the site selection, arrangement, and infrastructure surrounding these units concerns the AIA "because temporary housing has a tendency to become permanent," says Ann Somers, of AIA Mississippi. A statement released by the AIA national component notes, "Actions taken now have long-term consequences, and important principles should be adhered to from the beginning." It continues: "Regardless of a transitional or permanent housing arrangement, there are fundamental design elements that are essential to the construction of a ‘livable community.' There will be a need for privacy, convenience, retail, open space, recreational facilities, and entertainment so that residents can develop of a ‘sense of place.' "

Mary Comerio, a professor of architecture at the University of California, Berkeley who has studied disaster recovery, agrees, noting, "The U.S. is facing a situation similar to what many developing countries have faced after massive disasters: how to house large displaced populations. The solution is often to lay down as many units of housing, in a grid, as quickly as possible. This is great for politicians and terrible for the people who end up living there."