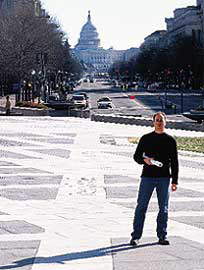 This year marks the 100th anniversary of the McMillan Plan, which reinforced the Washington, D.C. monumental core in the spirit of the 1791 L'Enfant Plan. While Washington is one of the most beautifully planned cities in the country, city planning had been an afterthought to recent mayors. That has changed under current mayor Anthony Williams, who appointed Andrew Altman as director of the D.C. Office of Planning in 1999, and quickly increased Altman’s planning staff from 12 to 66 people. Altman, formerly a planner in Oakland and Los Angeles, is reasserting the role of city planning in our nation’s capital, which has had to balance security with openness.

Washington, D.C. is a very different city, not only since Marion Barry was mayor, but in the months since September 11. What is Washington to you?

It’s a living, vibrant city—not a fortress. That’s the message we have to get out to people. And that has been my most fundamental challenge, among many, to bring back a vision for this city that really is from the ground up, from its neighborhoods. It’s not just about monuments and federal buildings, but it’s a living, breathing city. Planning is now given stature, legitimacy, and support in Washington. It’s been important to rebuild confidence in planning again in this city—people had lost confidence because planning was absent for so long.

How do you work with the various federal planning agencies in Washington?

What I’ve been trying to do is assert the city’s role with respect to planning together, as opposed to planning separately. Our concern is much broader. Planning in Washington is no longer just a federal enterprise. The city is now asserting its own vision.

You’re currently working on plans for the Anacostia River waterfront. How will this impact the city?

I’m passionate about remaking Washington a waterfront city, which is one of my highest priorities. Seventy percent of our waterfront is owned by the federal government—whether it’s federal property or city property, it’s all about the city. So we’re working very closely with all of the agencies along the waterfront—whether it’s the General Services Administration, or the National Parks Service, or the Navy—and doing a collaborative waterfront plan with the city leading the charge. That’s a fundamental tectonic change that has occurred since the mayor was elected.

Tell me about your downtown plan.

We introduced it last November, and we have seen that downtown is really starting to flourish. We have more than 6 million square feet of office construction and more than 2,000 units of housing being built downtown. We have such a strong office market that the challenge has been to introduce mixed uses, to introduce residential, and to create a downtown that doesn’t close at 5 o’clock. The opportunity to re-image downtown is really important.

Since September 11, the federal government has put up Jersey barriers in front of a number of its buildings. When it does that, is it done in consultation with the city at all?

Often not. The federal government has the security threat, and one of our concerns is that these are often stated as temporary closures and they become permanent. Pennsylvania Avenue is an example and we’re very concerned because it’s the heart of the city. We don’t want to see the federal government continuing this every time there’s a threat. Putting more and more Jersey barriers up is not going to solve the problem.

In light of September 11, what’s the status of Pennsylvania Avenue in front of the White House? In early 2001, the Bush administration was open to exploring the possibility of reopening if it seemed viable. But since September 11th, is that not the case?

After September 11th, the Secret Service’s security concerns were heightened. We were making great momentum until then, and since then they just really tightened security and really became much less receptive to opening it. I think it’s unfortunate. There was great momentum being made on Pennsylvania Avenue, in the sense of reopening it. The compromise that we struck is that, and this is a recommendation through National Capital Planning Commission and the security taskforce that we really were heavily involved with, was to allow partial reopening of Pennsylvania Avenue. That will obviously have to be secure, to allow limited bus access through. It would improve the avenue so that it’s not a visual eyesore anymore and really improve circulation downtown. We didn’t want to erase forever the possibility of reopening Pennsylvania Avenue and to declare it closed in perpetuity. We have immediate circulation problems downtown that have to be solved.

How is the city evolving under mayor Williams?

Well, it’s a great moment to do planning in the city. It’s rare, in my view, in the life of the city, to have the confidence of political leadership and the mayor, good relationships with the Congress, a strong economy that continues to be strong even as the rest of the country is in recession, as well as a strong community spirit. With all of this together, this confluence, that’s when great city building can occur. And I think Washington stands at that moment of great city building because it’s not just an incremental change, it could be a fundamental transformation. The downtown will be changed in the wake of this city building. You’ll see a different city 10 years from now. The downtown will be fundamentally different and the waterfront will be different. People are coming back to the city. For the first time our population’s increasing. We were projected to loose 70,000 people, but we’re actually gaining population for the first time in over 20 years. So, it’s an exciting time to do planning because it’s not just idle plans.

How is the city commemorating the 100-year anniversary of the McMillan Plan?