Despite a long and rich history, Qatar, with its largely nomadic Bedouin past, has few tangible artifacts to show for its legacy. The Persian Gulf country’s image today is exemplified by its capital, Doha, where meteoric growth kicked off with the discovery of oil and gas in the middle of the last century, a development that has made this small nation the world’s richest per capita. It is against the city’s backdrop of bombastic high-rises that the otherworldly National Museum of Qatar, designed by Ateliers Jean Nouvel, was imagined and, at the end of March, inaugurated with much fanfare after more than a decade-long gestation, carrying an undisclosed price tag.

An immense collision of sandy-hued concrete disks, the building is planned as a loop that winds for almost a mile and makes you feel as if you’ve landed on planet Tatooine in the Star Wars universe. As an institution, it aims to address the contradiction between Qatar’s past and present. It also is striving to become an emblem for this country as it searches for a new identity and works to prove itself as a cultural force—particularly in light of the ongoing Saudi-led blockade, as well as the 2022 FIFA World Cup, which Qatar will be hosting. The first scheme envisioned by Nouvel (who recently completed the Louvre Abu Dhabi) was subterranean, directing its focus to the turn-of-the-century palace of Sheikh Abdullah bin Jassim Al Thani that occupies a prominent site along the waterfront Corniche promenade. But the client, Qatar Museums, led by Sheikha Al Myassa bint Hamad bin Khalifa Al Thani, a prolific art collector and promoter of aspirational civic architecture, wanted an icon. “It is important to show that this museum is not just a dust museum—it is a museum of today, linked to the dynamism of modern Qatar,” says Nouvel. “And for a national museum, we need to talk with symbols—we need a monumental approach.” So the design that was approved sits above ground, wrapping around the newly restored walled palace, one of the few extant monuments of Qatar’s history. 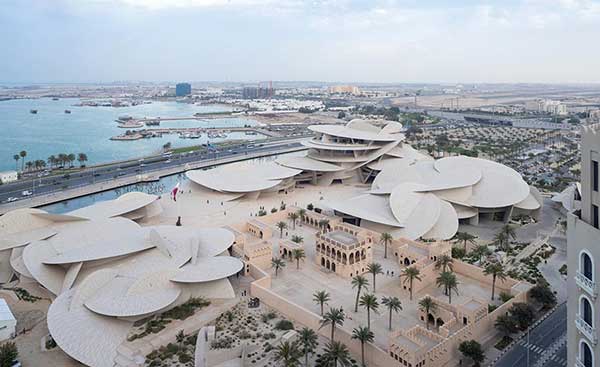 The museum sits on the Doha Bay, near the Palace of Sheikh Abdullah bin Jassim Al Thani. Photo © Iwan Baan

Doha is big on symbolism. I.M. Pei’s Museum of Islamic Art (2008) pays homage to a 13th-century ablutions fountain; Arata Isozaki looked to the iconic Sidra tree for his convention center there (2011); and Pelli Clarke Pelli’s medical center (2018) riffs on the sails of the dhow, a traditional sailing vessel. Nouvel says his form was inspired by the desert rose—a mineral formation, found beneath the sand in the Gulf region, with a complex geometry of interlaced disks. He liked it that the shape was enigmatic and that it offered possibility. “When you have a random system, you can adapt it and also adapt the contents,” says the architect, referring to the fact that a collection did not exist and was developed alongside the building design. The museum’s resemblance to this small, natural object is uncanny, with its enormous rounded volumes, from 46 to 285 feet in diameter, in a dance, cantilevering and jutting up, across, and through one another.

On the exterior, the unusual massing forms passageways, outcrops, and canopies offering shade against the intense sun. The hue of the glass-fiber-reinforced concrete (GFRC) cladding shifts with the light, from a dull white to beige, to a wispy pink, blending with the color of the ubiquitous desert sand. It was smart to embrace the dust, which covers everything here, as attested by the scores of grimy glass buildings nearby. Described as a necklace, the snaking building is clasped together by the palace, the chain forming a large courtyard at its center. You can enter this space by passing through the building—from the main entrance off a cul-de-sac—or via a vehicular drop-off, which slips beneath the museum. Standing within this exterior room evokes a sense of wonder—it is impossible to imagine what lies behind the walls of cascading disks.

Morphing from exterior enclosures into interior walls and ceilings, the disks slice through one another, creating the unusually shaped galleries within. Eleven in all, they are arranged as a circuit, carrying visitors on a chronological tour of the peninsula’s history, starting with the geological and morphological beginnings and moving through early human presence, life in the desert and on the coast, the pearling industry, and the country’s modern history. There are few vertical or horizontal planes within the museum’s 324,000 square feet of occupiable space. Even the floor inclines down partway through the voyage (making for an interesting ride for a visitor using a wheelchair) and then rises again toward the final galleries. Spatially, it’s an engaging journey—every point of contact is unique, so you cannot anticipate what you’ll next encounter; the path contracts into narrow canyons and then bursts into expansive rooms, carrying you along in its current. The museum attempts to communicate the essence of a culture through archaeological finds, animal models, and cultural artifacts. Overall, the exhibits are minimal and unsurprising. There are a number of commissioned artworks, but it is not an art museum by any stretch. “Jean’s architecture is incredible,” says Sheikha Al Myassa. “But the walls made it hard to hang anything.” Instead, the large canted surfaces have been animated with nine films, produced by the Doha Film Institute, showcasing the region’s flora, fauna, and history through narrative or abstracted images. Formatted to fit the particular dimensions of the walls, the works—culminating with American artist Doug Aitken’s kaleidoscopic The Coming of Oil—are vivid and stunning.

There must have been some serious head-scratching when Nouvel announced the fanciful notion of a desert rose to his team. “It is a simple idea, but very complex to achieve,” acknowledges Nouvel’s project manager Hafid Rakem. With 539 disks of 30 different sizes, intersecting at a mind-boggling number of nodes, a multinational team of hundreds of architects, engineers, and other consultants collaborated, from the concept’s inception, through what would become, say the engineers, the largest BIM project in the world in terms of project scope and degree of detailing. Using Digital Project, CAD software developed by Gehry Technologies, the team advanced the design in conjunction with the program and museology. As the project progressed, each of these things informed the shape of the others.

Arup provided most of the engineering disciplines, including the primary structure. “We had many debates in the early stages about how to realize that form of the desert rose, structurally,” says project director David Gilpin. “Is it concrete? Steel? How do disks create spaces?” The team imagined different sized paper plates cut and stuck together at various angles with the negative spaces between them becoming the galleries. Initially, they envisioned a concrete structure, but quickly realized that steel would be more flexible and appropriate for the sculptural forms they were after. Over years, the engineers and architects developed a standard set of disks and experimented with assembling them. “A big challenge for us was that the architectural form and structural form are one and the same,” says Gilpin. “Every time you move a wall, you move the structure.”

Using a variety of analysis and modeling software, architectural models were transformed into structural-analysis models, adjusted, and then moved back again into the architectural model and back and forth as the building was optimized, the interiors and the overall shape worked out, and building services threaded through the disks. Then, of course, the model had to be further tweaked to make, among other things, the interior spaces conform to international gallery standards and work from a sustainability standpoint (the building is LEED Gold). Along the way, there were myriad fundamental challenges presented by the unusual form, like how to ground the building for lightning and how to manage rainwater (rain here tends to be rare and brief, but heavy). And then there were the challenges of handling a labor force of about 2,500 on a 24-7 clock—in a country that has had a less-than-stellar reputation where conditions for migrant construction workers are concerned.

Stuttgart-based Werner Sobek worked on the design and engineering of the secondary structure, envelope, and embeds that connect the cladding to the substructure. “We developed the engineering logic behind the cladding and substructure,” says managing director and partner Thomas Winterstetter, “and the computerized parametric design features to make the cladding buildable for the complex geometry of this crazy-looking thing.” The cladding consists of 76,000 panels made from 3,000 master molds. Though their arrangement appears random, there is a repeating radial pattern that was morphed and adapted to the various disk sizes. “And we had to do this while acknowledging the limited capabilities of the cladding subcontractor in Doha,” Winterstetter says. The architects specified high-performance GFRC to enable a thin profile and crisp edges, which could not be accomplished with the thicker and heavier traditional reinforced concrete. Stainless-steel embeds cast into the panels connect them to the substructure. Of course, all the building components had to address the aggressive subtropical coastal-desert climate, with its humidity, saltwater air, and big temperature swings. The substructure, for example, was galvanized with an increased zinc thickness, and prototypes of the panels were cast in labs to test their technical capabilities, prior to large mock-ups’ being built in Doha and Abu Dhabi for architectural design-intent review.

Nouvel seems content for the technical gymnastics to remain something of a mystery. “You don’t want to show the tool, you want to show what the tool has done,” he says. In its outlandishness, the National Museum of Qatar has loudly proclaimed the country’s might and ambitions, looking to culture and, specifically, architecture as a way of securing a place on the world stage. Here, this fantastical, impossible-rendering-come-to-life feels right at home. 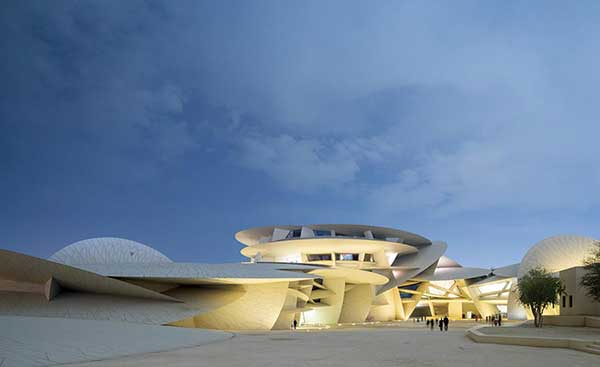 The building's exterior planes are dramatically illuminated in the evening. Photo © Iwan Baan