The centerpiece of the eight-bill Climate Mobilization Act is aimed at new and existing buildings larger than 25,000 square feet, requiring owners to cut emissions by 40 percent by 2030, and 80 percent by 2050. Fail to comply, and owners would face steep fines—$1 million a year for the largest properties.

Mayor Bill de Blasio, who may run for president in 2020, is expected to sign the legislation in the coming weeks and has touted it as a Green New Deal for New York, one that could forge a path for other cities to follow.

“This is the first city in the world, that I know of, that has placed significant carbon emission caps on this many buildings,” said John M. Mandyck, the chief executive officer of the Urban Green Council, an advocacy group for sustainable buildings.

In 2016, the city pledged in its Roadmap to 80x50 report to meet the Paris Climate Agreement targets to reduce emissions by 80 percent by 2050. In New York, where the Urban Green Council estimates about 60 percent of the city’s 1 million buildings are 25,000 square feet or larger, some 67 percent of carbon emissions come from the built environment. The Climate Mobilization Act builds on this and other existing rules, like the city benchmarking law, which requires large buildings to measure and report energy and water consumption. 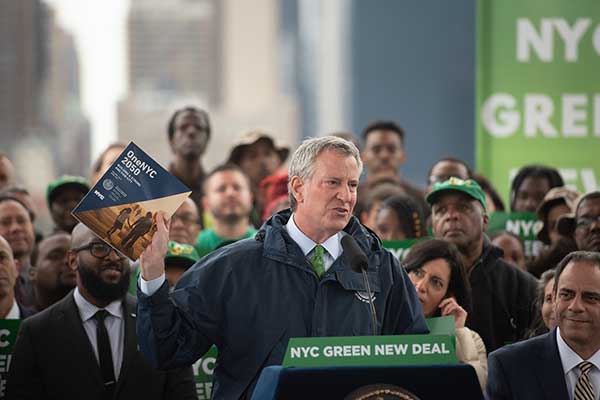 The new legislation makes specific, and expensive, demands on these larger buildings. Mark Chambers, the director of the Mayor’s Office of Sustainability, estimates the work could cost property owners at least $4 billion, as buildings replace or retrofit windows, roofs and heating and cooling systems.

“The new law is going to drive down carbon emissions and it does so through really tough requirements on buildings,” Mandyck of the Urban Green Council told Architectural Record.

But the bill does make some exceptions. Public housing, houses of worship, and apartment buildings with rent-regulated units would be exempt from the emissions caps, and instead have to meet softer targets, like insulating pipes. The Real Estate Board of New York (REBNY) opposes the legislation for excluding so many buildings from the requirements and setting emission standards that it says could inhibit business growth.

The legislation “does not take a comprehensive, city-wide approach needed to solve this complex issue,” REBNY President John H. Banks said in a statement.

The Climate Mobilization Act includes an advisory board to recommend policy changes as the law rolls out. It also allows buildings to trade carbon credits and encourages building owners to buy renewable sources of energy in an effort to shift the city away from fossil fuels. Other new rules would require green roofs or solar panels on new construction and major retrofits. (Meanwhile, Los Angeles Mayor Eric Garcetti unveiled a version of a Green New Deal that would phase out gas-fueled cars in the city.)

In a speech on Earth Day, Mayor de Blasio singled out glass skyscrapers as a major source of pollution. “We are going to introduce legislation to ban the glass and steel skyscrapers that have contributed so much to global warming,” he said, standing on the Queens shoreline. “They have no place in our city or on our Earth anymore.” He doubled down on his statement a few days later on MSNBC’s Morning Joe.

Chambers, however, back-pedaled de Blasio’s comments, telling Architectural Record, “No one is saying that no one is going to use glass material anymore. What we’re saying is we have to be as thoughtful as possible about our mass and glass ratios.”

REBNY’s Banks pushed back against criticism of glass towers in a May 1 op-ed in Real Estate Weekly, writing, “We must not forget that a building’s rate of energy use and efficiency is not dictated by the material found in its facade—far from it.”

The mayor may be able to implement design changes through the city’s revised energy code for new construction, expected by the end of the year, according to Mandyck. “We’re waiting to see any proposals,” he said in an email. “So we simply don’t know if it will be part of the code—and if, how—or separate legislation.”

Chambers also pointed to the energy code as a way to implement such changes, saying that the mayor “wants our energy code to be even stronger.” He added that he would like to see more buildings employ glazing technology to improve glass efficiency; use more photovoltaic glass; and consider alternate materials.

“There is one single archetype that has dominated, and that is solely floor to ceiling curtain wall,” Chamber said. “If we’re going to see glass, we’re going to see the highest performing glass, ushering in a new phase where we’re not designing buildings from the inside out.”