In the first decade of the 2000s, Massachusetts Institute of Technology (MIT) went on a building spree unlike any in its history. Acting as architectural impresario, the then dean of the university’s School of Architecture + Planning, the late William J. Mitchell, brought in architects like Frank Gehry, Fumihiko Maki, Charles Correa, and Steven Holl, who designed lavish signature buildings throughout the triangular campus in Cambridge, Massachusetts, all with the enthusiastic blessing of MIT’s then president Charles M. Vest.

The cost of the program was immense. In addition, there was a lawsuit by MIT against Gehry’s firm for cost overruns, schedule delays, and leakage at the Ray and Maria Stata Center—all of which seemed to make the institute wary of hiring star architects. The MIT News Office says the suit was settled “amicably” in 2010.

“After that building boom, there was a fear on campus of an architect acting as a lone ranger, not adhering to budgets or engaging the community,” says Nader Tehrani, who was head of MIT’s architecture department from 2010 to 2014. (Tehrani is now dean of the Irwin S. Chanin School of Architecture at Cooper Union, in New York.)

Now MIT is in the midst of another building boom—but this one is different. It is more con- textual, more aligned to the institute’s goal of melding with its Cambridge surroundings, whether Kendall Square to the east or Central Square to the west.

On the Kendall Square side, a pair of towers currently under construction on Main Street will form the new “eastern gateway” to the campus. One, by Tehrani’s Boston-based firm NADAAA, in collaboration with Perkins+Will as architect of record, is a 28-story, 454-unit graduate-student residence with daring cantilevers and views of the Charles River. The structure will also include retail, offices, a childcare center, a 200-seat forum for public events, and the new MIT admissions office. 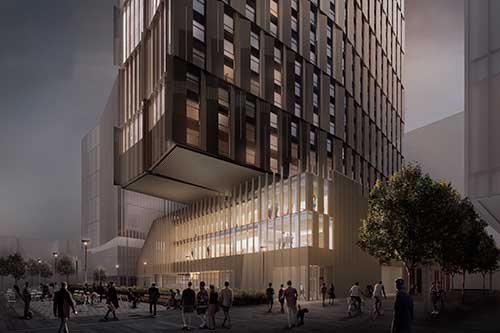 On the opposite side of the Kendall Square T subway station, New York–based Weiss/ Manfredi has designed a 17-story tower for academic and commercial office space, with fritted glass pleats forming subtle cantilevers. “Some buildings can be a little quieter,” says firm cofounder Michael Manfredi, noting the involvement of MIT’s current architecture dean, Hashim Sarkis, who “laid out a set of urban conditions rather than encouraging singular architectural bravura.” 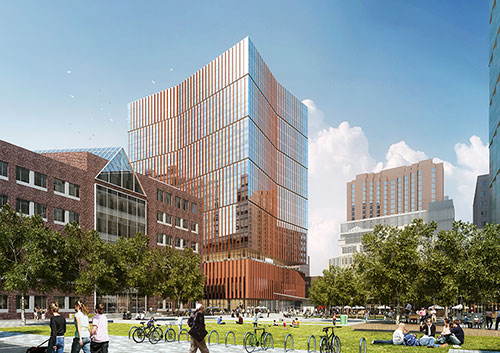 The building’s four-story orthogonal glass base will house the MIT Museum—the interiors of which Boston firm Höweler + Yoon will design. Eric Höweler, cofounder of the practice, says that the space will “bring out the quirkiness that MIT is about. It will be a teaching museum—‘hands on,’ not ‘hands off.’ ” With an adjoining bookstore and café, the project seems poised to add some much needed vibrancy to Kendall Square street life. The NADAAA and Weiss/Manfredi buildings are expected to open in fall 2020, the museum in fall 2021. 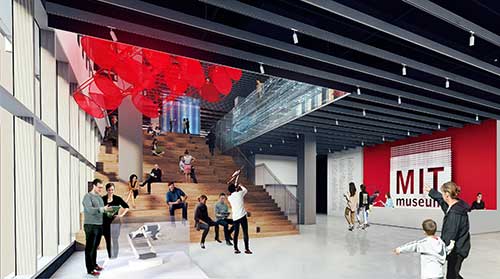 MIT has two forthcoming projects on the western edge of campus that look to be standouts, one residential, one academic.

Just down Vassar Street from Steven Holl’s Simmons Hall and not far from Alvar Aalto’s Baker House, a new 450-bed undergraduate dormitory by Los Angeles–based Michael Maltzan Architecture aims to continue a tradition of innovative residential design at MIT. “Our building is the next step from Aalto and Holl,” says Michael Maltzan, design principal. The project will feature “cluster neighborhoods” to foster student camaraderie, and, in a nod to the “deep culture of creation that exists at MIT,” says Maltzan, a transparent maker-space at street level. The dorm will be occupied by fall 2020.

The academic space on this west campus side will be a new home for the School of Architecture + Planning. New York–based Diller Scofidio + Renfro (DSR) is leading the redesign of the historic Metropolitan Warehouse, at the corner of Massachusetts Avenue and Vassar Street. “The Met,” as it is called, is a substantial redbrick building complete with a crenelated roof edge. “We’re interested in taking this building that looks like a fortress and make it appear to be a design school of the future,” says Ben Gilmartin, a partner with DSR. 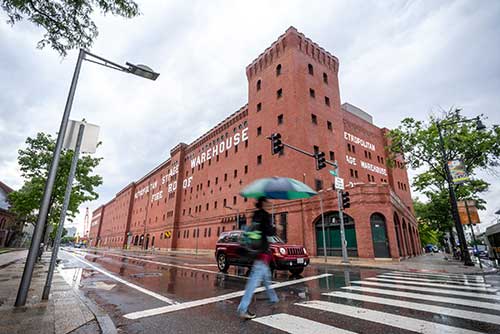 Dean Sarkis is excited that the reconceived building—which is still in the design phase, with no set completion date—will “give us visibility and send a message that we are the most ‘in the vanguard’ architecture school in the world.”

Noting the “increasingly blurred line between the campus and the city,” associate provost Krystyn Van Vliet hopes the projects on both sides of MIT will foster “a healthier, more dynamic interaction” between the institute and its neighbors.

For his part, Sarkis seems content with a lower-key role than that of his predecessor, Mitchell. “I’m here to facilitate the conversation,” he says. “I make sure that buildings on MIT’s campus have harmony and consistency.”

With so many new voices added to the architectural conversation on campus, the dean’s role seems more like that of conductor than impresario, striking just the right chords and finding harmony in architectural diversity. Or maybe just a good urban planner.

Editor's Note: A previous version of this story indicated the MIT Museum was expected to open in May 2021; in fact, it is slated for a fall 2021 opening.

James McCown is a freelance architecture and design writer based in Boston.