This summer, a luxuriant Brazilian jungle has made its way to, of all places, the concrete jungle. At the New York Botanical Garden (NYBG) in the Bronx, the serendipitously named landscape architect Raymond Jungles has created a verdant nirvana that celebrates the work of Roberto Burle Marx (1909–94), the Brazilian painter, botanist, and master sculptor of flora. The temporary display garden summons the organic, asymmetric forms, twists and turns, and electrifying colors that define Burle Marx’s landscape designs, which range from public parks, such as the 1951 Parque Jaqueria in Recife, to the grounds for government buildings, including the seminal 1942 Ministry of Education and Health Building in Rio de Janeiro, by Lúcio Costa, Oscar Niemeyer, and other prominent Modernist architects.

There may be no one better suited to design the exhibit than the Miami-based Jungles, who spent time with Burle Marx in the late 1980s and early ’90s at the artist’s estate, known as the Sítio, in a small village west of Rio de Janeiro. There, over the course of four decades, Burle Marx built his house, several pavilions and greenhouses, and nurtured his plant collection of more than 3,500 species. Burle Marx has remained a constant source of inspiration for Jungles, whose projects—the grounds around the Grove at Grand Bay, by Bjarke Ingels Group, and at Faena House Condominiums in Miami, by Foster + Partners, for instance—build upon the biodiversity and sinuous shapes characteristic of Burle Marx’s work. “I wouldn’t be me without Roberto,” says the landscape architect.

For the garden exhibition, Jungles designed a serpentine black-and-white walkway, reminiscent of Burle Marx’s 1970 Copacabana Beachfront in Rio de Janeiro, that guides visitors through intimate shaded alcoves and dynamic open gathering spaces surrounded by tropical flora. “Sculpting space is more important than creating sculpture,” says Jungles. Throughout, the layering of plants and the meandering pathway work together to create moments of surprise and allure. “Roberto loved drama,” he adds.

The garden’s diverse plant palette—from the NYBG, as well as from Jungles’s collection in Florida—comprises some of Burle Marx’s favorites species, such as the towering Copernicia Baileyana palm native to Cuba, and the Madagascan triangle palm, whose leaves sprout upwards and out like a water fountain. Smaller plants along the walkway—such as the bright pink-speckled coleus, a hallmark of Burle Marx’s earlier gardens from the 1940s and ’50s—add texture and visual contrast. 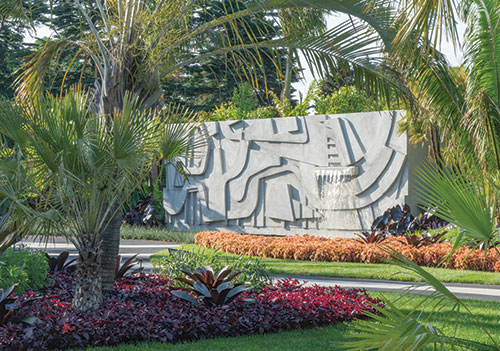 The show’s crescendo is a sculptural relief wall, a replica of one Burle Marx designed in 1983 for the Safra Bank in São Paulo. Water trickles down the curved forms carved out of its concrete surface and collects in a small, amoeba-shaped pond. As Jungles notes, “No Burle Marx garden was complete without water.” From many vantage points, plants frame views to the water; even if you can’t see it, the sound of its ripples makes its presence known.

Inside the NYBG library, a gallery dedicated to Burle Marx’s paintings and textiles showcases his range as a visual artist. The abstract, two-dimensional artworks echo the colors, coils, and orthogonal lines of his landscapes, and help to give a fuller understanding of Burle Marx as not just a landscape designer but a modern-day Renaissance man (he also was a trained opera singer). On view through September 29, Brazilian Modern: The Living Art of Roberto Burle Marx is, according to Jungles, the perfect embodiment of its subject. “I tried to make it as Burle Marx as can be,” he says. “It’s an homage to my mentor.”