To solve issues commonly linked to conventional powdered cement—health risks for workers and the product’s short shelf life—a Canadian company called INKAS has engineered a process for making a granulated version. “It’s like instant coffee. It still results in the same drink just more convenient for those working with it. There’s less dust and it has a longer shelf life,” says the company’s chief scientific officer, Alexander Ozersky.

The process involves applying mechanical stress to the cement mix while it is being manufactured, so that the particles bind to each other in clumpy granules instead of being ground into the fine powder routinely used to make concrete. 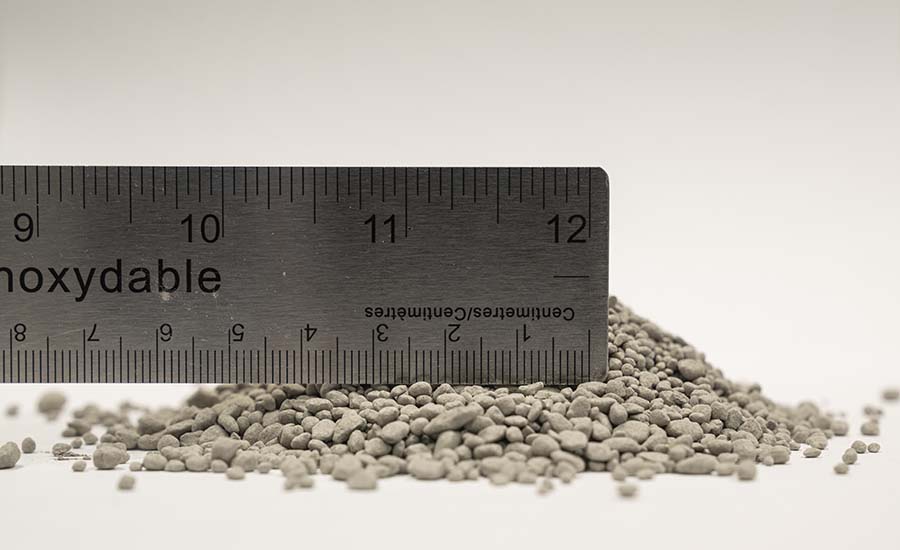 Granulated cement can remain usable while stored for up to a year. Photo courtesy of the manufacturer

INKAS, a manufacturer of safes and armored-cars, discovered the granulated idea while trying to create a better compound for building its safes, which are built of fortified concrete and steel rebar.

The resulting granulated cement was inherently more shelf stable than conventionally produced powder, because it doesn’t easily absorb humidity from the air when stored, a reaction that usually hardens it into a useless mound, Ozersky explains.

That longer shelf life, he says, is where there could be an opportunity for builders, customers and cement manufacturers to indirectly reduce greenhouse gas emissions by preventing waste.

Granulating cement is an idea that the industry has experimented with in the past. Ozersky just formed the granules without the help of a chemical binder, which he says makes the product cost-efficient for large scale production. With a patent pending, the company is considering releasing its technology to the broader construction market in the near future.