The author of the just-published Gordon Bunshaft and SOM: Building Corporate Modernism (Yale University Press) recently came across the only extant painting by the architect. Adams, professor emeritus at Vassar, tells the story here.

In her new book on the urban planner Ed Logue, Saving America’s Cities, Lizabeth Cohen makes a point I wish I’d had the wit to write in my own book on the architect Gordon Bunshaft. Writing a book, she notes, about someone recently deceased means forming your interpretation out on a windy promontory, balancing yourself against the opinions of people who knew your subject personally and, sometimes, intimately. The breeze is invigorating but it presents some difficulty when it comes to forming your own take. A trivial incident in the case of Bunshaft comes to mind. In the casual way of many biographers, I took to calling my subject by a pet-name: “Bun,” or “Uncle Bunny.” One of his former colleagues was outraged. “He was always Mr. Bunshaft!” he insisted—and was only partially assuaged when I sent him letters addressed “Dear Bun,” and diary entries in which the architect referred to himself as “Uncle Bunny.” 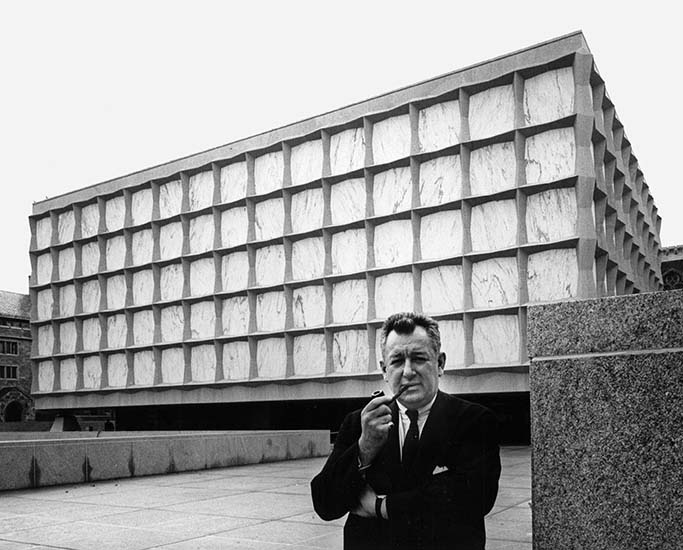 Another reality of writing about the relatively recently deceased (Bunshaft died in 1990) is that new information keeps popping up. One day I went to SOM in New York to see a box of letters from Bunshaft’s files that just had been discovered. In one stunning reply, he told his Pittsburgh client Jack Heinz that he would not be attending his son John Heinz’s fundraiser for his senate campaign because he was a Democrat and Heinz a Republican, and he just didn’t have money for politics. As a current partner observed when I showed him the letter: “Just send Heinz $25 and shut up.”

Then, this past November, while at an event at Bunshaft’s Beinecke Library at Yale University, I met a collector who specializes in pre-1950 American abstract paintings, and among his holdings was an original “Bunshaft,” dated 1939. We made a date to meet at his house to see the painting. An oil on canvas entitled “Homage à Mirò,” it measures approximately 24” x 24”. The painting seems to show a series of sculptures, one possibly African with insect- or bird-like legs, another possibly classical set against a tilted white plane (possibly a table). To the left is another plane, possibly a painting, set against the table. Other faces or partial faces hover around the canvas. The palette is dominated by golds, reds, and white and (most surprisingly) touches of green, generally known as Bunshaft’s least favorite color.

But how can we be sure Bunshaft is the painter of this painting?

Of course, there is no certainty. The painting is signed in pencil on the back “Gordon Bunshaft 1939,” and the signature appears to be his, though possibly signed long after the painting was done. And Bunshaft was very fond of Mirò as an artist. In his war-time Greenwich Village apartment he had a panoramic photographic reproduction of the Mirò mural from SOM’s Terrace Plaza Hotel in Cincinnati placed over the mantelpiece. Later, after his success with Lever House (1952), he began to buy works by Mirò: he purchased one work, "Le Paysage" (1927), in 1958 from the Pierre Matisse Gallery for $15,450—and sold it in 1977 for $800,000 to the National Gallery in Australia!

Though he was an eager collector of painting and sculpture, we also know that he made paintings in the style of artists he admired, like this “Mirò,” to help create a particular interior environment. In his later Manhattan apartment, photographed by Ezra Stoller in the 1950s, there was a “Mondrian” by Bunshaft (its location today is unknown). So far as we know, there are no other paintings by him in existence, so the discovery of what seems to be a new painting is exceptional. This impulse—to make a work in the manner of a painter he admired—points to his ambitions and the worlds he wanted so badly to inhabit. These were places he ultimately did come to inhabit, but in 1939—with only a couple architectural works to his name that he called “not lousy”—as he completed work on the Venezuela Pavilion for the New York World’s Fair, that future was only a dream. How a young Jewish man from Buffalo would make his mark in the world was far from clear. Art provided one route forward. We can imagine that works like “his” Mondrian or “his” Mirò became the ornaments of his apartment or his office. “Mirò” was also the bridge between his earlier affinity for Alvar Aalto and Art Deco at the Venezuela Pavilion and the geometric abstraction of Lever House. Bunshaft was never a “painterly” architect and he hated the Beaux-Arts exercises he was forced to do as a student at MIT. Here, on this canvas, he was experimenting with abstraction, indulging his taste fully, in a way that was never possible in his architecture.