Four new public playgrounds in Lebanon offer more than just jungle gyms and slides. Primarily serving people who have been displaced from their homes by conflict, these community spaces, and the architects who created them, aim to engage residents in the entire life cycle of the design.

Architects Joana Dabaj and Riccardo Luca Conti cofounded the nonprofit design studio CatalyticAction in London at the end of 2014, after completing master’s degrees in building and urban design in development at University College London. “We saw what impact the Syrian crisis was having in Lebanon and wanted to test how architecture can be a tool to empower communities,” says Dabaj, who is Lebanese. 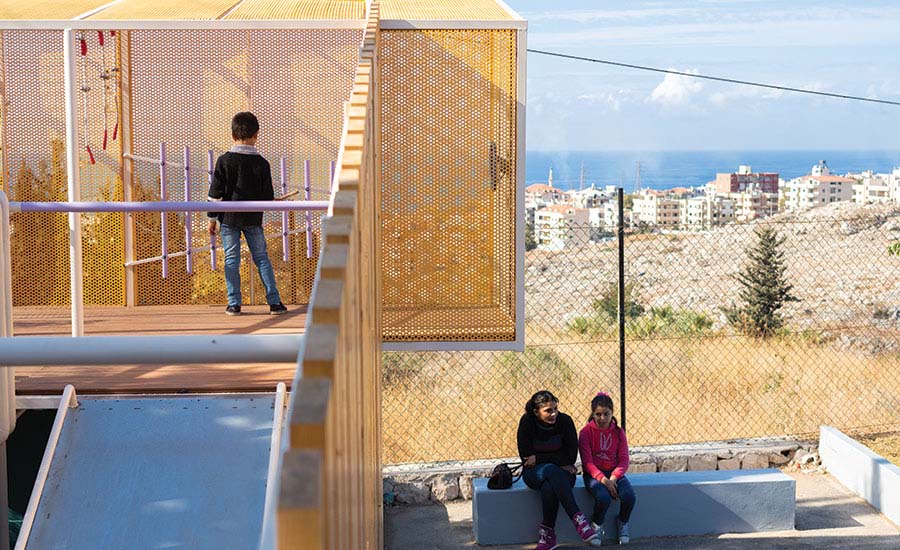 At the park in Barja, just south of Beirut on the Mediterranean coast, play structures cast shade on seating areas. Photo courtesy CatalyticAction, click to enlarge.

With UNICEF as the primary funder, the firm partnered with two aid organizations to design child-friendly spaces that respond to the needs of displaced people in four cities. Terre des Hommes Italia, an international humanitarian and children’s-rights charity, identified sites in Arsal, Hermel, and Barja, while Amel Association International, a non-profit, nongovernmental organization in Lebanon, selected a location in Qaraoun, where the local municipality has plans for a similar but larger project.

Community input is central to the design process. Working with local collaborators to do outreach, CatalyticAction held workshops for children, youth, and adult caregivers in each city, leading participants through activities, and holding conversation and feedback sessions to learn what features they needed and desired. “Even though these are child-friendly spaces, you need to take into account the other users,” explains Dabaj. “If a child goes to the park, he’ll go with his parents or older siblings, so what are they going to do while they’re there?” In one location, where the population included many people with disabilities, “We reached out to a very small local organization and held an activity with them,” says Dabaj. “We wanted to understand what it would mean for this population to access such a space and what elements we should include to encourage them.” 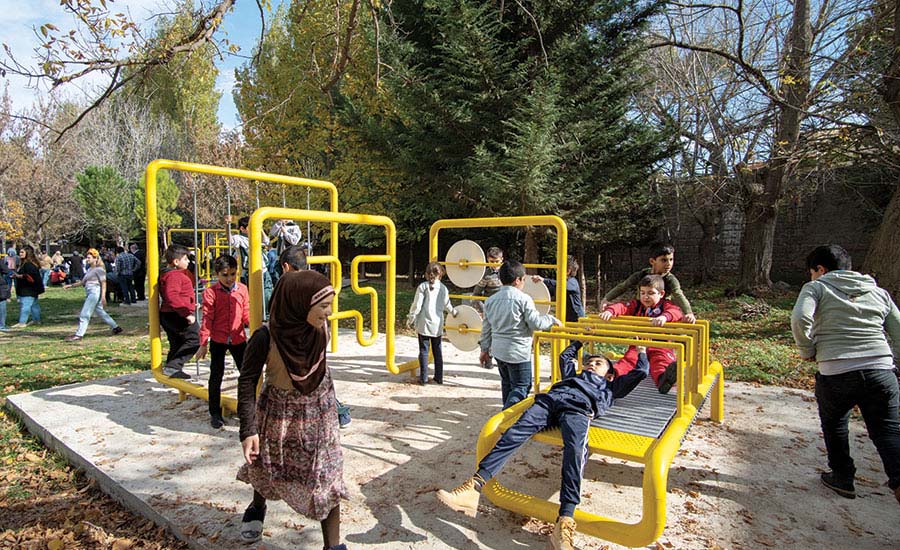 An accessible slide is a highlight of park in Hermel. Photo courtesy CatalyticAction

The play structures in each park vary, depending on the feedback, but include everything from spinning cubes and nest swings to wheelchair-accessible slides—essentially, a human-sized conveyor belt framed by a series of handlebars.

CatalyticAction designs all of the equipment, which would be prohibitively expensive to purchase or import, and instructs local contractors in how to make it all using local materials. “We found a factory in Lebanon that creates customizable rollers, usually for airports, and asked them to make a version for our accessible slide,” says Dabaj. “They didn’t know what that was but said, ‘Please send pictures!’ ”

The importance of the project extends beyond the built environment. “We’re trying to empower these communities and make them active agents, engaged in the process of creating something that will benefit them,” says Dabaj. “There’s a sense of autonomy.”

In addition to creating public projects, the small team at CatalyticAction conducts research on empowerment through architecture. The firm recently won a grant to create a toolkit, based on their work, about how to codesign social infrastructure for and with people affected by displacement. The biggest takeaway is easy to sum up, says Dabaj: “The most important thing is a feeling of belonging.”