A 250-acre oval-shaped area in Tripoli, Lebanon, once replete with economic promise, has remained an eerie sight for decades: a graveyard of deserted concrete shells, skeletons of the 15 unique pavilions designed by Oscar Niemeyer in the early 1960s for the Rachid Karami International Fair. Commis­sioned during Lebanon’s golden modern age, the complex was intended as a permanent fairground to showcase the country’s development and innovation, meant to accommodate more than 2 million people a year. In 1975, just prior to its completion, the outbreak of civil war halted construction. Neglected ever since, the structures are an important legacy of modernism in the Middle East; the site is currently being considered for UNESCO’s World Heritage list. Now one of the pavilions—the low-slung, rectilinear guesthouse—has been renovated into a woodworking design facility by Beirut-based firm EAST Architecture Studio.

The low horizontal concrete structure has a windowless facade. Click to enlarge.

The fairground, which also includes a scaled-down Saarinen­esque arch, an elevated helipad with a spiral staircase, a 2,000-foot-long boomerang-shaped canopy, and a domed theater, has become a mecca for architecture students. EAST’s principals, Nicolas Fayad and Charles Kettaneh, had both visited the site in ­graduate school, but they never noticed the flat-roofed, horizontal guesthouse next to its more flamboyant neighbors. The lack of windows on the 26,000-square-foot edifice’s facade—plus the fact that it had been taken over by fig trees—disguised its significance (Niemeyer’s design provided day­lighting via three internal courtyards—a central 40-foot by 40-foot atrium and two strips of open space along the east and west walls). It wasn’t until the firm responded to the project RFP that they learned of the structure. “I had visited the site many times, so I was really surprised by its presence,” says Fayad. “Because we had overlooked it, the task of bringing it back was all the more interesting.” 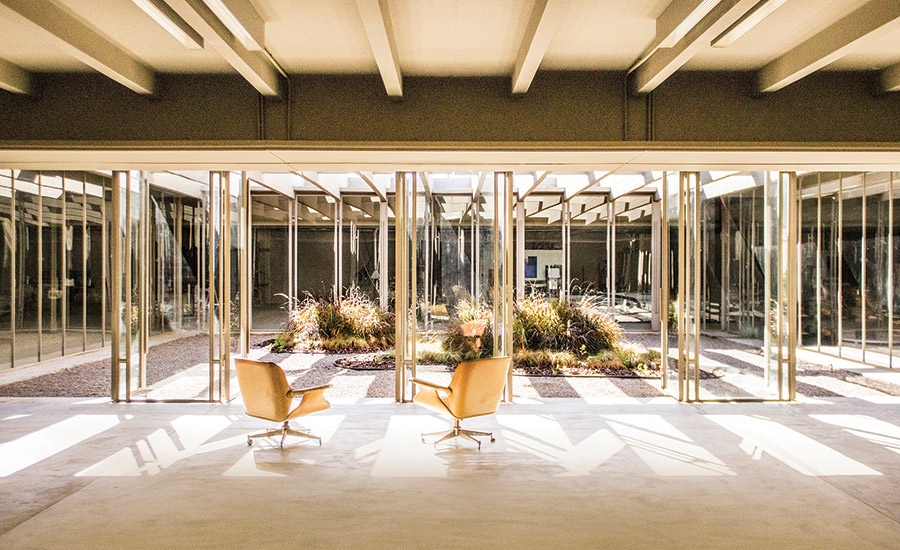 A material library, exhibition space, and workshop surround the central atrium, the space‘s primary source of daylight. Light fixtures run along the ceiling, hugging the concrete joists to emphasize the rhythm of the structural elements.

Niemeyer’s design featured 14 equal-sized guest rooms for overnight visitors, organized in a line parallel to the east wall, giving each a sliver of outdoor patio. In addition, there was meant to be a reception hall, information area, and restaurant surrounding the atrium, and back-of-house spaces, including a kitchen and laundry facility along the west end. Exper­tise France—a European Union–funded international public agency that aims to stimulate economic development through region-specific initiatives—was charged with transforming the incomplete structure into a platform that could help revive the carpentry industry in Tripoli, which is 50 miles from Beirut. The group hired EAST to create a flexible program for fabrication studios and exhibition areas.

According to Fayad, the main challenges were completing the work on an expedited schedule and the small budget—a large chunk of which had to be dedicated to repairing the concrete, damaged over the years by Lebanese and Syrian militias that occupied the structure. There was not enough funding to renovate the guest rooms, so the architects worked only on the areas surrounding the central courtyard and the ancillary rooms. 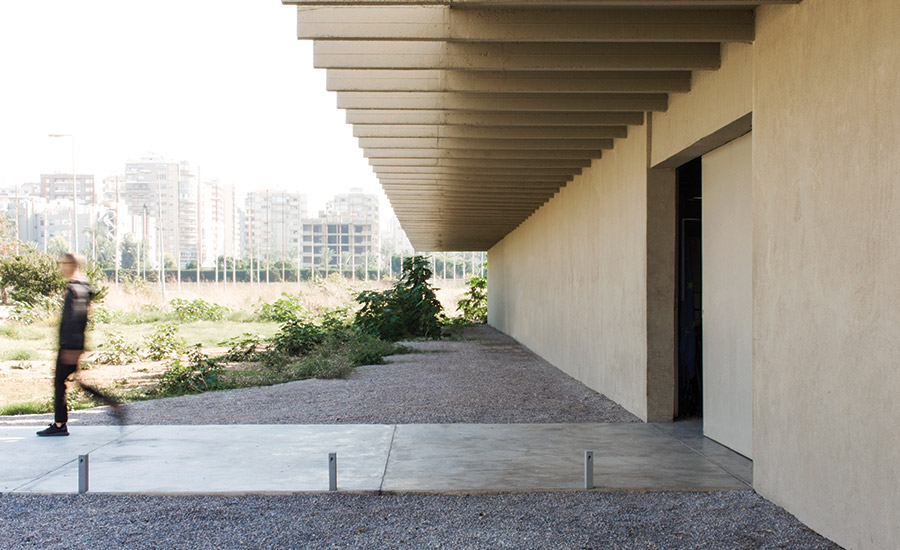 The ceiling’s one-way concrete joists extend out beyond the building’s exterior, accentuating its linearity. 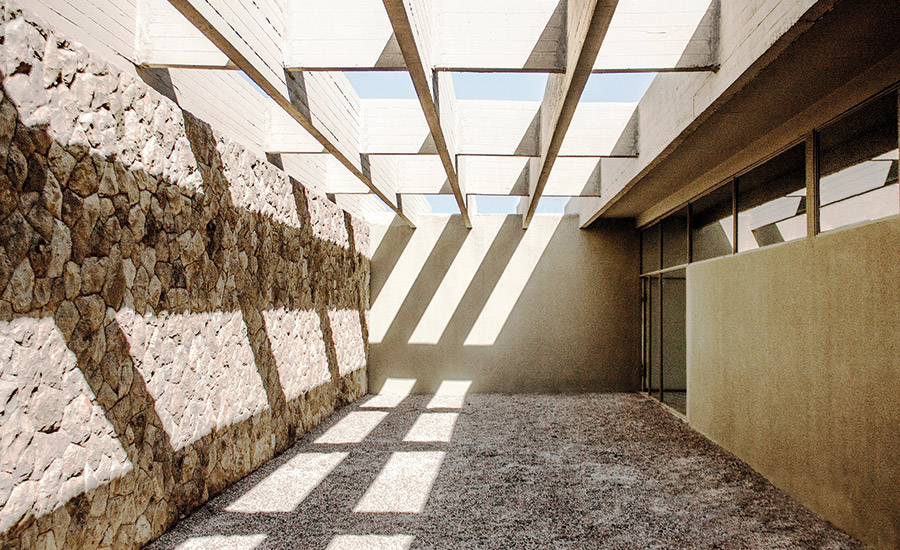 One of the outdoor spaces is protected by a limestone-clad wall.

Because the primary interior spaces were open-plan, design interventions—after the architects did careful research—were ­minimal. “We wanted to find out how the pavilion was originally conceived by Nie­meyer himself,” says Fayad. “We looked at the fairground’s other structures, but also at some of the buildings he had completed around the same time.” One of those buildings was the Itamaraty Palace in Brasília, which, according to the architects, shared similar features to the guesthouse, such as the ceiling’s exposed one-way concrete joist system. To divide the spaces in a way that promotes transparency and flexibility, and that emphasizes the rhythm of the ceiling structure, they inserted custom-made glass partitions that fit over the joists like puzzle pieces, but can pivot. They also sandwiched each of the four primary rectangular concrete columns on their broad sides between two panels of plywood, creating a shadowed, striped effect on the narrow sides—a decorative detail that Niemeyer employed throughout Itamaraty, and one that was particularly appropriate here, given the facility’s ­purpose; wood panels were also placed underneath the drop beams that intersect these columns, hiding new mechanical and electrical systems.

Since its opening in 2018, the completed building, known as Minjara—an Arab word that roughly translates to “carpentry workshop”—has provided local carpenters hit by economic downturn with the tools and space to work, connecting them with ­architects, designers, and local showroom owners. Minjara recently launched a furniture collection that has been exhibited in Paris and Beirut. As the first pavilion to be given new life in the exposition complex, the project signals growing interest in capturing the site’s lost economic potential. “We are excited to see things happening in the building,” says Fayad. “Hopefully, the rehabilitation of the fair’s other structures will follow.” 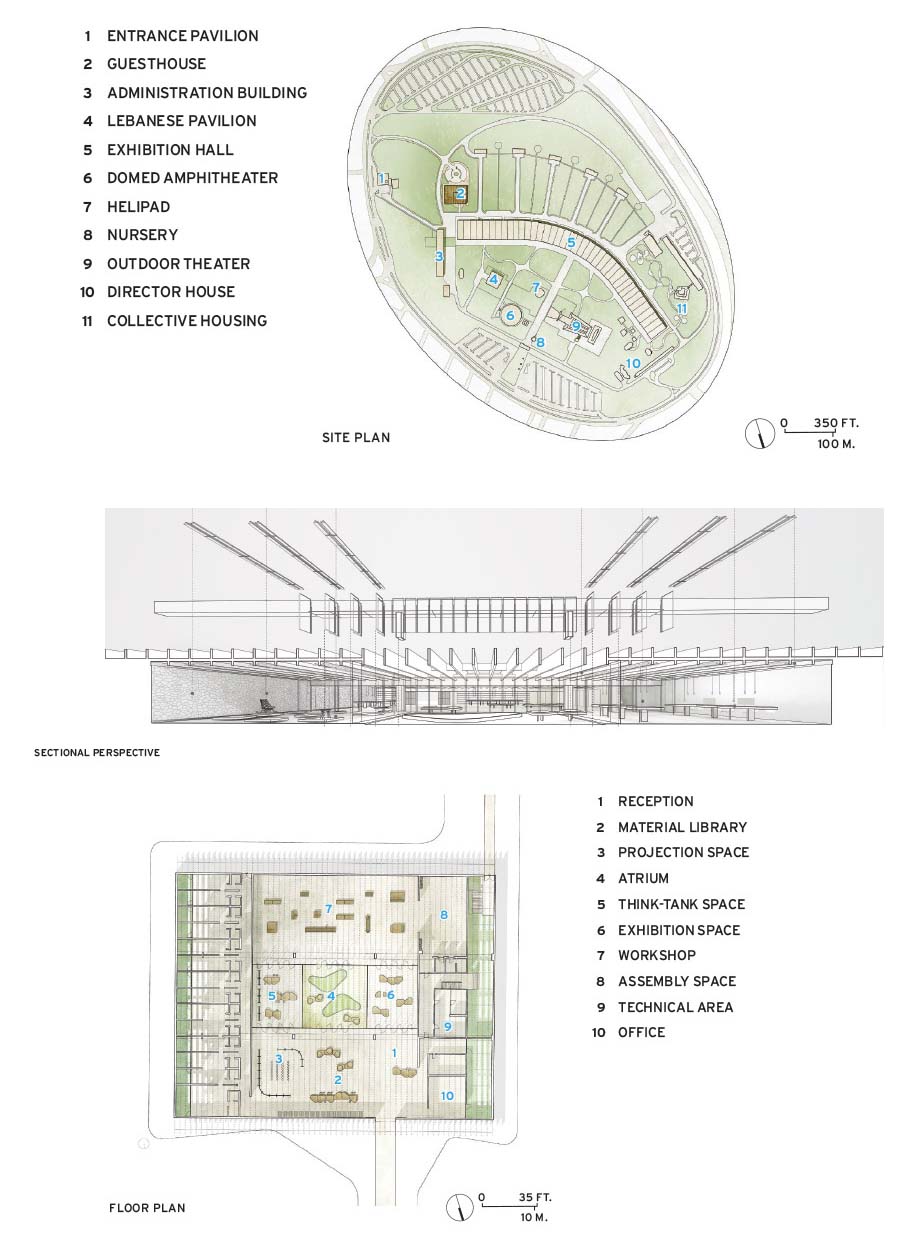