“Architecture and watchmaking hold a unique place in culture,” says Michael Friedman, of Swiss watchmaker Audemars Piguet. Friedman, who is head of complications—meaning he oversees the integration of watch functions that do more than mark the hours and minutes—explains that both disciplines involve engineering and mathematics, the need to understand and combine many different materials, and an artistic aspect. These are literal parallels, perhaps, but Danish architecture studio BIG took them very much to heart when designing the new museum and workshop at Le Brassus, in the Vallée de Joux. The result is an immersive educational showroom for the company’s painstakingly handmade timepieces, whose fans include Formula One race car driver Michael Schumacher and hip-hop stars Jay-Z and Kanye West. 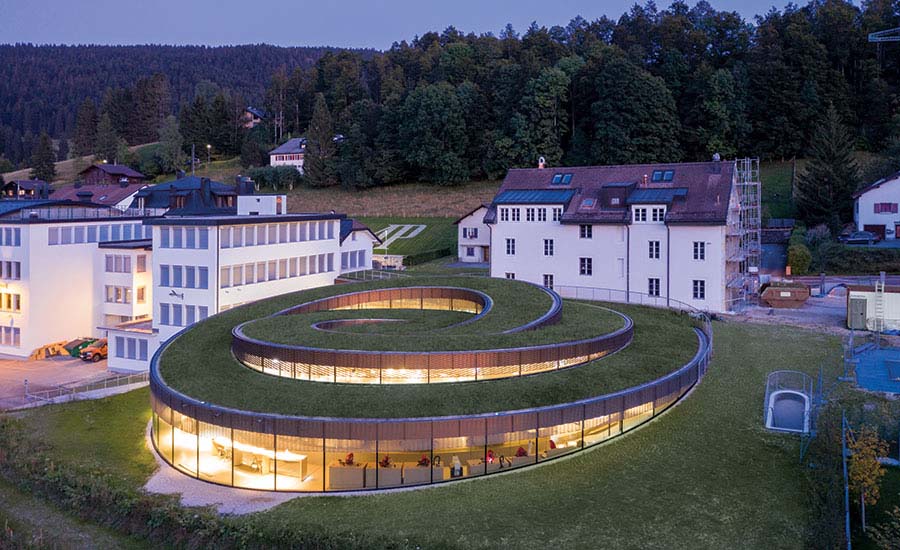 The serpentine workshop and museum building (above and top) is built into a slope and covered with a green roof, making it reminiscent of Robert Smithson’s Spiral Jetty. Photo © Iwan Baan, click to enlarge.

Founded in 1875, Audemars Piguet nicely encapsulates the Swiss paradox: on the one hand, a conservative country that venerates tradition; on the other, a society driven by technological innovation and modernization. When the “quartz crisis” hit watchmaking in the 1970s, Audemars Piguet opted to eschew the electronic and continue its traditional clockwork manufacture, all the while using modern technology, including CAD, to achieve ever greater feats of miniaturization and complexity. It’s a paradox that pleases BIG’s founder, Bjarke Ingels, who likes such opposing dualities and describes his practice as the pursuit of oxymorons like “hedonistic sustainability” and “pragmatic utopia.” For Audemars Piguet, the oxymoron entailed designing something that would make its mark and wow the visitor, all the while effacing itself in deference to the bucolic valley setting and the company’s historic workshop, an unremarkable structure from 1868 now used for watch repair, part of a collection of buildings the company owns on the site. 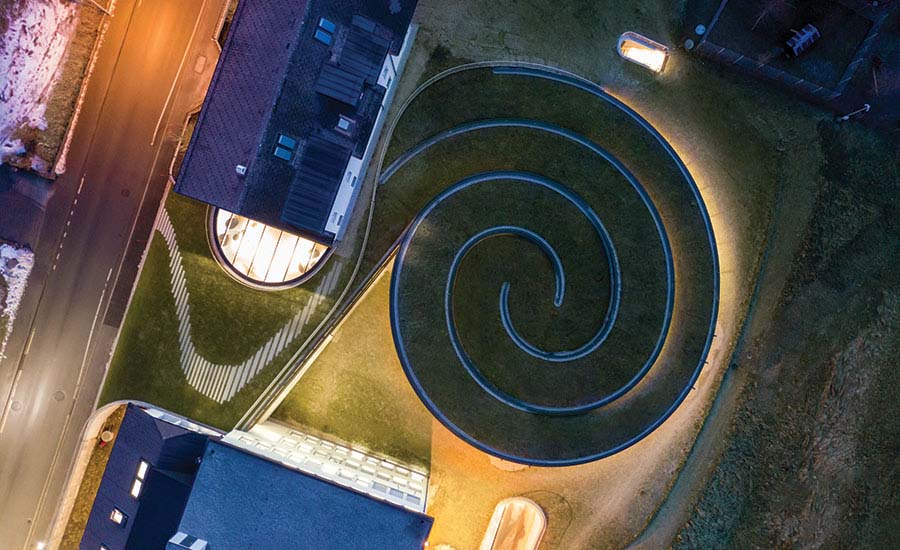 Topography was on BIG’s side, since they were given a spot downhill from the 19th-century building. Circular in plan, with a planted roof, the museum resembles land art when seen from the windows of the historic workshop. The new building “is a Swiss Spiral Jetty,” Ingels quips. In section, it comprises three layers: a chunky concrete basement containing the firm’s parking facility, an almost all-glass floor housing the museum and workshops, and a 470-ton steel roof and technical ceiling. “We were fascinated by the precision with which the watches are made and that there’s no excess, no fat,” says Daniel Sundlin, the BIG partner who led the design phase. This concept is the source of the primary technical feat: rather than columns or load-bearing walls, the heavy roof stands on structural glass, 110 panels of it in all. 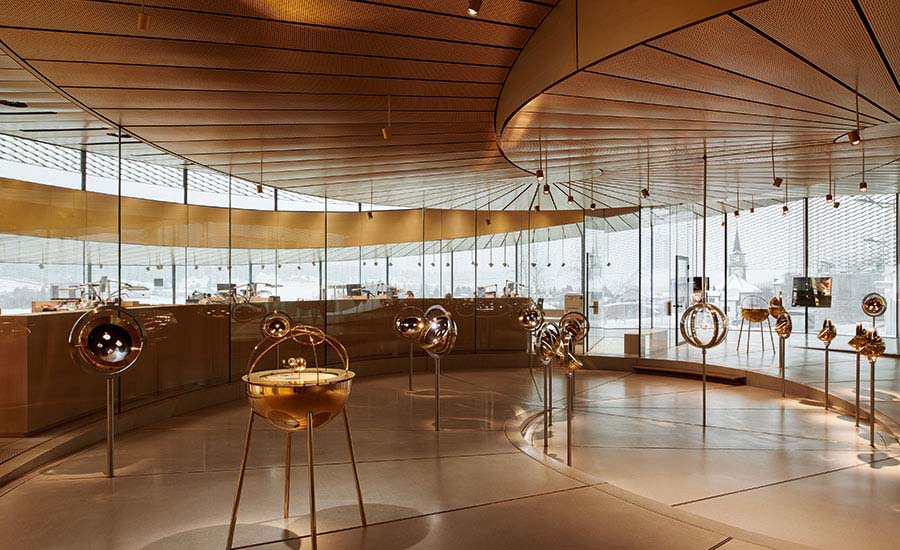 The glass-and-brass museum display cases echo the materials of the architecture and its perforated brass ceilings and terrazzo floors with brass joints. 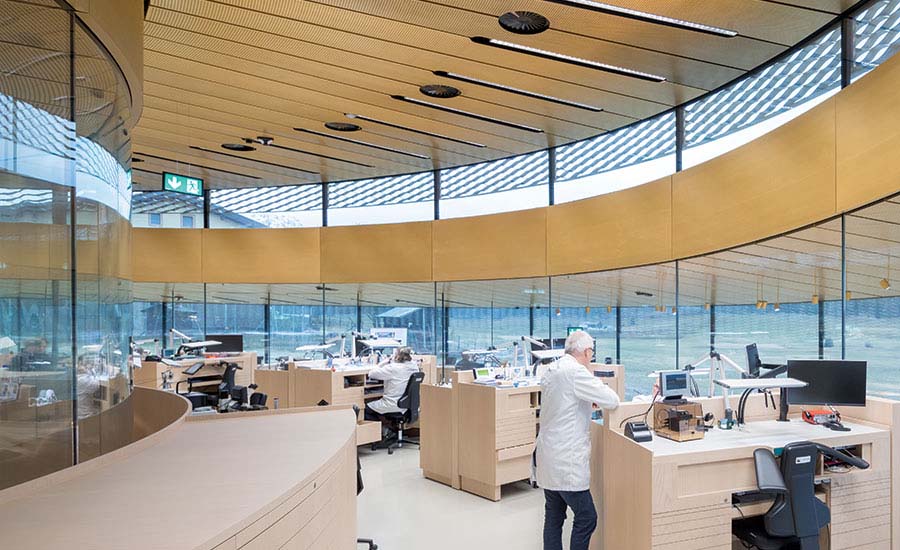 The workshops, which wrap the exhibition areas, are hermetically sealed behind glass and entered through air locks.

Manufactured in Austria, and each requiring three weeks to make, the panels comprise three to six layers of float glass, depending on the load borne. The thickest at are at the perimeter and include argon-filled insulation cavities. A gesture that Ingels likens to mystery clocks, whose hands appear to float in front of crystal, the structural glass is all the more remarkable in that it conforms to both seismic regulations (although glass performs poorly in tension, the panels’ curvature helps stiffen them) and the stringent Swiss energy-consumption standard Minergie. Obviously, solar gain and glare were an issue, so in addition to a low-E coating, computer-modeled woven-brass brises-soleil wrap parts of the building, their weft and warp varying according to predicted sun exposure. 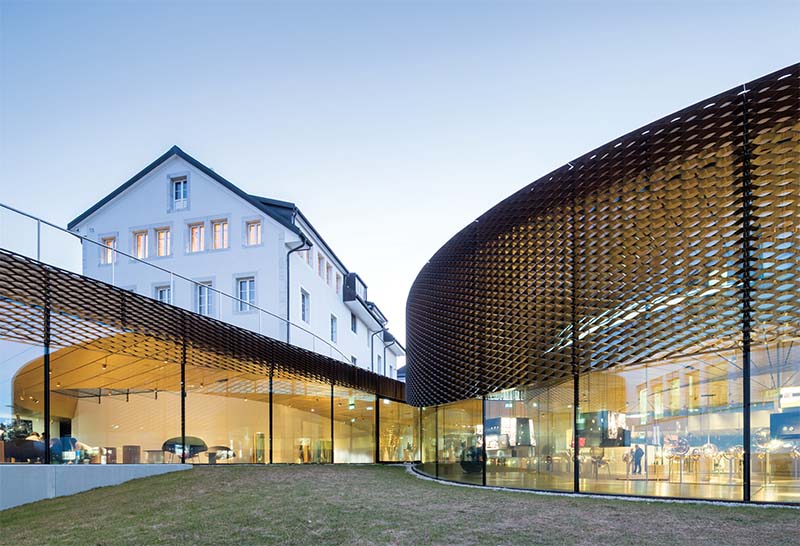 Woven brass brises-soleil are intended to protect the interiors from glare, their weft and warp varying according to computer-modeled sun exposure. Photo © Iwan Baan

Visitors enter through an existing street-side building before proceeding through a lobby, which flows seamlessly into the new museum space. Again to trim off excess fat, but also to increase intimacy given how small watches are, BIG chose to avoid the classic museological enfilade of rooms. “You have the continuous history of the Audemars Piguet brand,” explains Sundlin, “but we rolled it up in a double spiral,” which, though the space is open, manifests itself through changes in floor and ceiling levels. “The spiral is like a watch spring coiling up,” says Ingels. “We wanted it to feel like a light pavilion where the spring is hovering over your head.” Part of the visitor circuit (run by appointment starting this summer and only for a guided tour) includes the watchmaking ateliers: pressurized so that dust does not fall on worktops, they are hermetically sealed behind glass and entered through air locks. The museum display cases and scenography, conceived by German interior-design firm Atelier Brückner, deploy the same glass-and-brass vocabulary as BIG’s building (whose suspended ceiling is in perforated brass and floor in terrazzo with brass joints), and allow light and the gaze to flow through and around them.

On paper this all sounds great: an intelligent response to a challenging brief, where form and content are symbolically intertwined, technology is pushed to its utmost, and everything realized with the precision detailing Swiss contractors are famed for. And yet the experience seems disappointing—banal even. BIG wanted to maximize the views and maintain the oxymoron that you’re simultaneously inside and out. But, with no framing device to set off the valley prospect, the effect is anticlimactic. Moreover, the many and very thick black joints between the narrow perimeter panes read like steel supports, destroying the wraparound-glass illusion (le détail qui tue if ever there was one). And there are practical disadvantages too: on the February afternoon I visited, some watchmakers had opened black umbrellas to shade their workstations from the snow-glare-intensified sunlight flooding in. All that effort and money—quite how much has not been divulged—to build what feels like a blinged-up luxury-car showroom! But Audemars Piguet presumably knows its market—race car drivers, rappers, et al.—so this must be just what purchasers of $27,000 watches want. 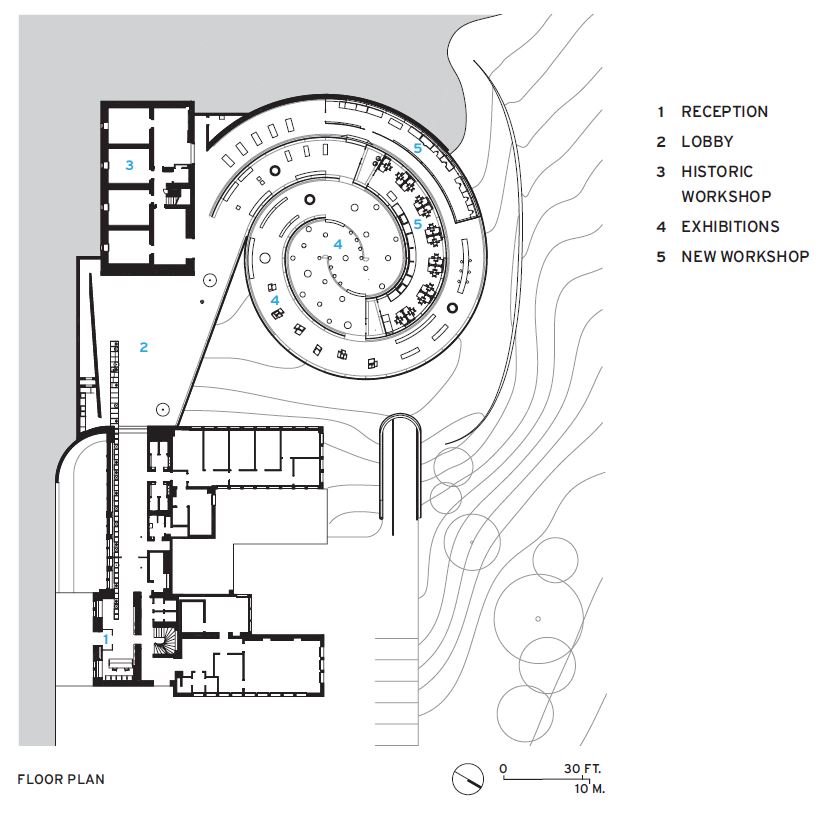