Last summer, over 300,000 tourists flocked to the quaint Bavarian town of Wassertrüdingen, about two hours north of Munich, not to indulge in beer and schnitzel but to enjoy its public parks. Each year for about four months, the state government holds a garden show, or landesgartenschau, in a different city within this German province. In preparation for the 2019 event—a major undertaking for the small town—Berlin-based landscape architecture firm Planorama expanded and redesigned almost 32 acres of Wassertrüdingen’s parks and land, including—appropriately—several bodies of water (wasser means “water” in German).

“The city’s existing green spaces were partially private, heavily overgrown or built over,” says Katja Erke, associate partner at Planorama, so the team’s design solution added two new public parks to the map, from newly purchased land: Wörnitzpark to the south, along the Wörnitz river (a tributary of the Danube), and Klingen­weiherpark to the north. 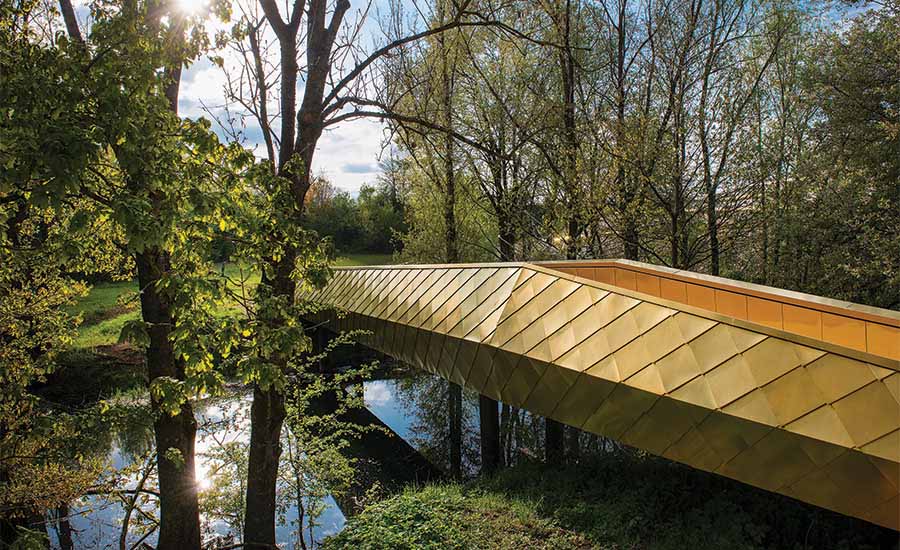 The Weihersteig walkway—in German, weiher translates to “pond,” and steig to “steep path”—spans the Klingenweiherpark, connecting the highest lookout point (top) to meadows and ponds (above). Photo © Hanns Joosten, click to enlarge.

The firm designed the new Klingenweiherpark with a singular concrete walkway whose edges are lined with gilded copper aluminum, unifying the nearly 18 acres, which include ponds, orchards, and a playground. The material, says Erke, was chosen because of its ability to reflect light and glimmer in the water—which it crosses in the form of footbridges with golden copper aluminum alloy parapets. Leading up to the park’s highest point atop a former landfill, the gleaming pathway zigs and zags around a limestone gravel–covered hill, culminating at a lookout point with views of the surrounding countryside. 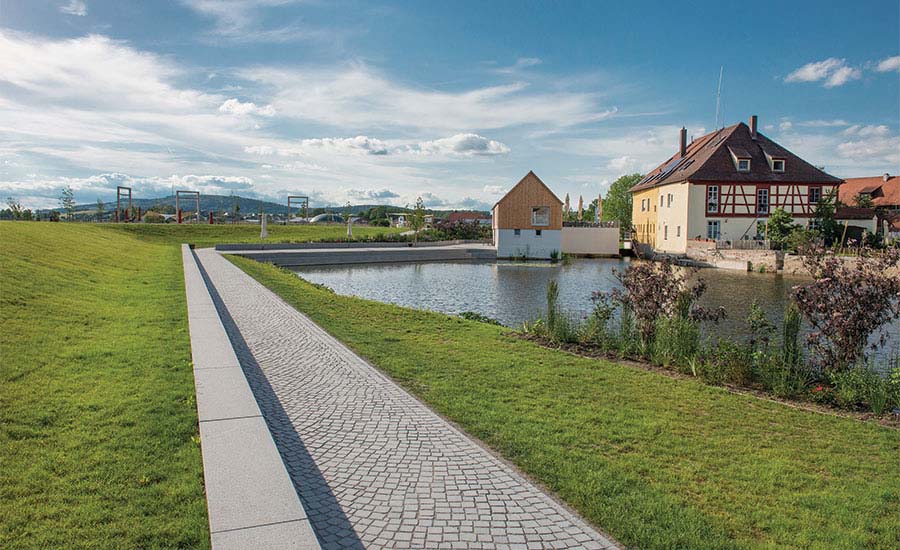 Planorama manipulated the Wörnitz river so it no longer flows through the old town mill. Photo © Hanns Joosten

In the 14-acre Wörnitzpark, the team had to reroute the Wörnitz river—which had previously flowed through the old town mill—for flood protection. The historic mill and its pond, meanwhile, sit adjacent to a specially designed tributary, away from the river’s newly redirected flow. Landscaped promenades and play areas line the riverbank, inviting passersby to linger and enjoy the waterfront.

At the time of this writing, in early May, many parks in Germany were closed as a result of COVID-19, though some green spaces remained open under rules for social distancing. The permanent parks created for the 2019 Bavarian Garden Show are operating under these rules, though playgrounds are temporarily closed. Conceived to draw international visitors to the small town, Wassertrüdingen’s revitalized landscape has, in these recent months of quarantine, had the added benefit of becoming an invaluable outdoor haven for the locals here.