Over 20 years, Brooklyn Bridge Park, designed by Michael Van Valkenburgh Associates (MVVA), has transformed a 1.3-mile stretch of a once-gritty industrial waterfront into a lush and treasured resource for New York. The completion of Pier 3, one of the last major elements—and the final of five piers to be developed—has been timely, providing a verdant landscape for locals to retreat to during the pandemic. With its loosely defined program, this park on a pier has drawn a range of visitors as they temporarily leave behind the stresses of dense urban living during a summer of COVID restrictions.

The long, narrow 85-acre park is squeezed between the Brooklyn–Queens Expressway and the East River, a tidal estuary, with Manhattan’s skyline just beyond. Managed by the not-for-profit Brooklyn Bridge Park Corporation, the park includes eight acres of private development—largely condos and a hotel—that provides the income for maintenance and operations. The first portion, Pier 1, was completed in 2010. Today, the park—which attracts over 5 million visitors annually—includes piers dedicated to soccer fields and basketball courts, as well as playgrounds, a marina, fishing and barbecuing areas, zones for kayaking, and a spine-like greenway along the shore that links the pieces and is well-used by cyclists and runners. 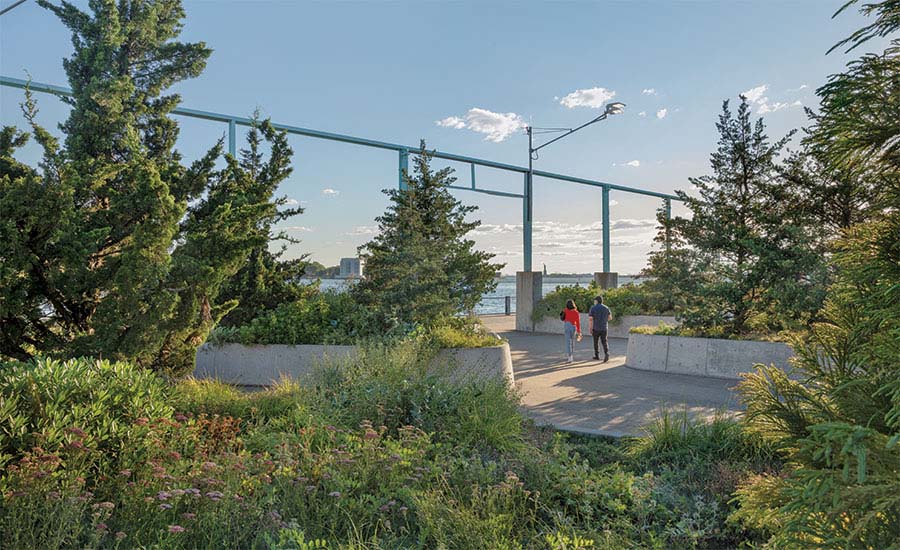 Toward the water, the scale of plantings diminishes. Photo © Elizabeth Felicella, click to enlarge.

To this mix, Pier 3 brings 4.6 acres of cultivated nature and recreation space, a balance of active and passive use. “Pier 3 provides a different take on the concept of play, as well as a more traditional pastoral destination,” says Michael Van Valkenburgh. “Brooklyn Bridge Park is extroverted, water-centric, but with Pier 3, we wanted a place that was more introverted.” Retaining the steel frame of the ware­house that once occupied the pier, the team left the original concrete deck at the perimeter exposed, to create a prome­nade. Passing across this rough industrial edge and through the steel ghost of the warehouse, you enter a green oasis. 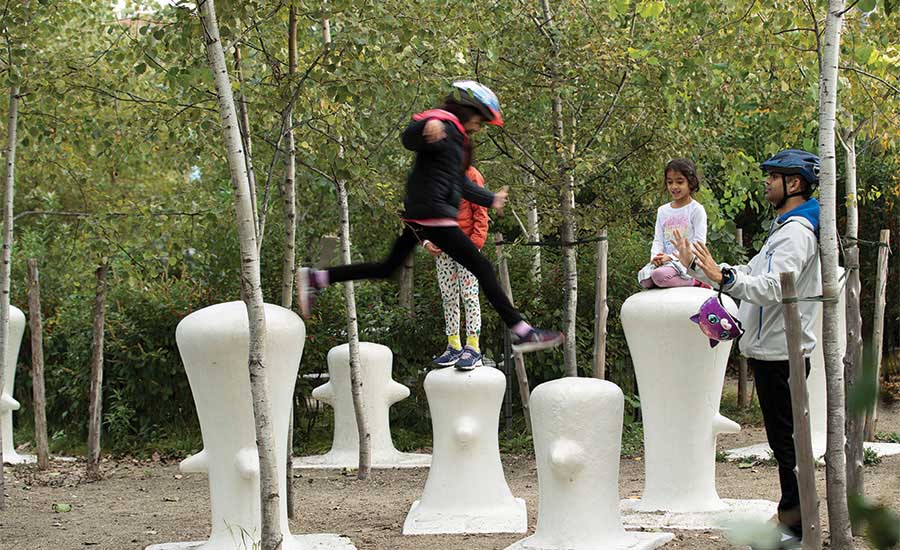 The biggest challenge of putting landscape on a site like this, points out MVVA principal Jason Siebenmorgen, is accommodating the weight of soil—especially the depth required for shade trees. In the project’s early stages, the pier’s existing wood piles were reinforced with rebar and concrete that was pumped into fiberglass forms installed to surround them. Existing seawalls were then removed and replaced with riprap edges on the adjacent shoreline. Finally, to create some separation from the mainland, the team cut out the deck that connected the pier to the greenway, installing two concrete bridges instead. To build topography on this flat surface without overloading the structure, MVVA erected a system of lightweight geofoam blocks. Pier 3 (most of which sits below the 100-year-flood line) is designed to withstand water inundation. Because 2012’s Hurricane Sandy flooded the park and dislodged the foam on Pier 5, a geotextile was used this time to anchor the material. On top of this is a 30-inch layer of sand, subsoil, and topsoil. Runoff (greatly reduced by the dramatic reduction of impervious surfaces) flows into plant beds, with their porous sandy soil mix; the rest is directed into the East River. 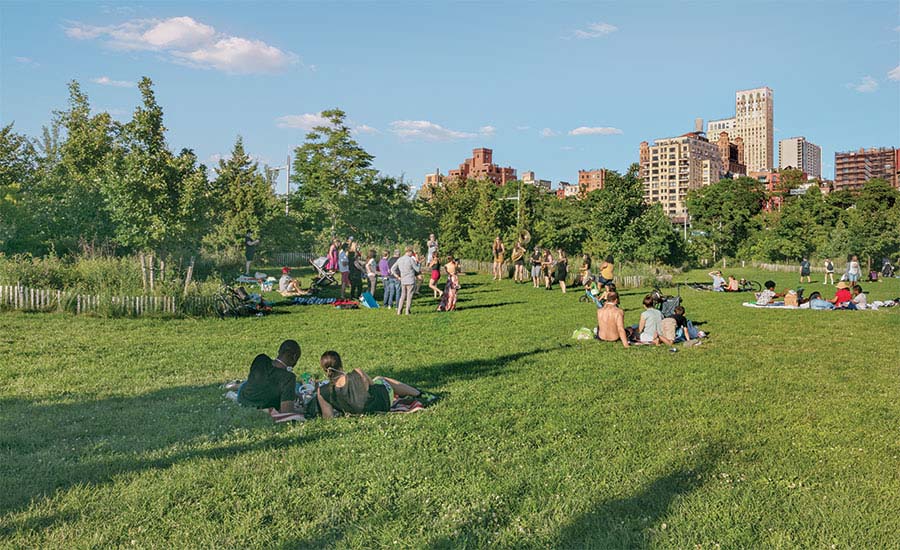 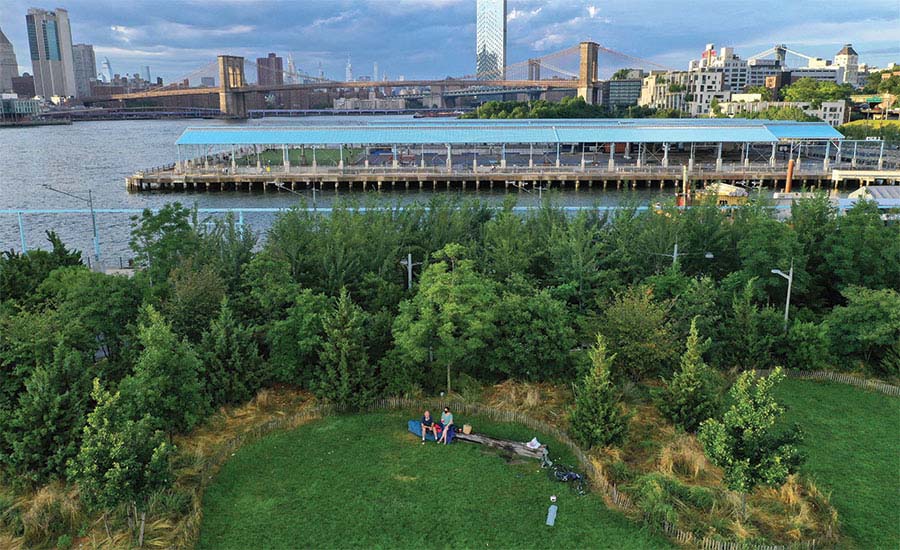 The amorphous shape of the central lawn creates nooks for gathering.

Hillocks and gentle rises lend this park-within-a-park a bowl shape, and define its expansive central lawn, which is flanked by meandering paths, an open event plaza, and the labyrinthine Discovery Garden, with its funhouse mirrors and “whisper room.” In plan, the lawn resembles an amoeba, with numerous curvy nooks, perfect for small private gatherings and picnics. “We had never heard of social distancing when we designed the park,” says Van Valkenburgh. “But the concept was there—in the public realm, many of us like to have separation.” Low cedar dune fencing appears to be holding back dense growth as if to prevent it from jumping out onto the tamed grass. 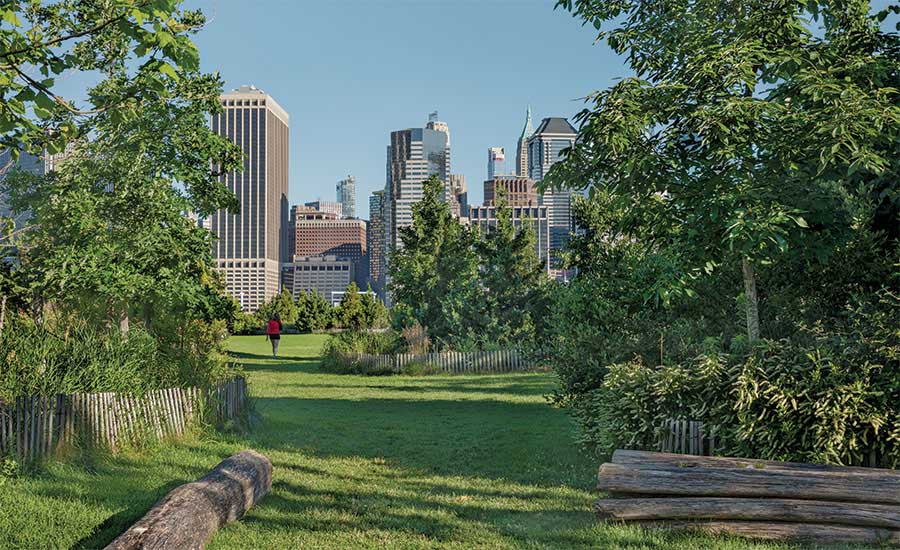 MVVA used a resilient, salt-tolerant plant palette that includes bayberry, beach rose, witch hazel, switch grass, and quaking aspen. Juniper brings year-round greenery. The horticultural staff here is deeply invested in ecology, says Siebenmorgen: Brooklyn Bridge Park is managed organically, irrigation is used sparingly—largely to help establish new plantings—and maintenance is adjusted according to such things as pollination studies, which might, for example, indicate when to prune. This jibes well with MVVA’s “natural and rowdy” general aesthetic, notes Siebenmorgen. “Plants are not sitting clipped and well-behaved in the corner,” he says. “They brush up against your ear or touch your arm—it’s about that kind of physical interaction.” While larger plantings—oak, black cherry, coffee trees, lindens, and hedgerows—are inland, moving toward the waterfront, the scale comes down with scrubby specimens such as sea kale, sassafrass, salt shrub, Mauntauk daisy, and beach pea. The overall effect is that of an accelerated trip through a chain of microclimates: from forest to meadow to headland. 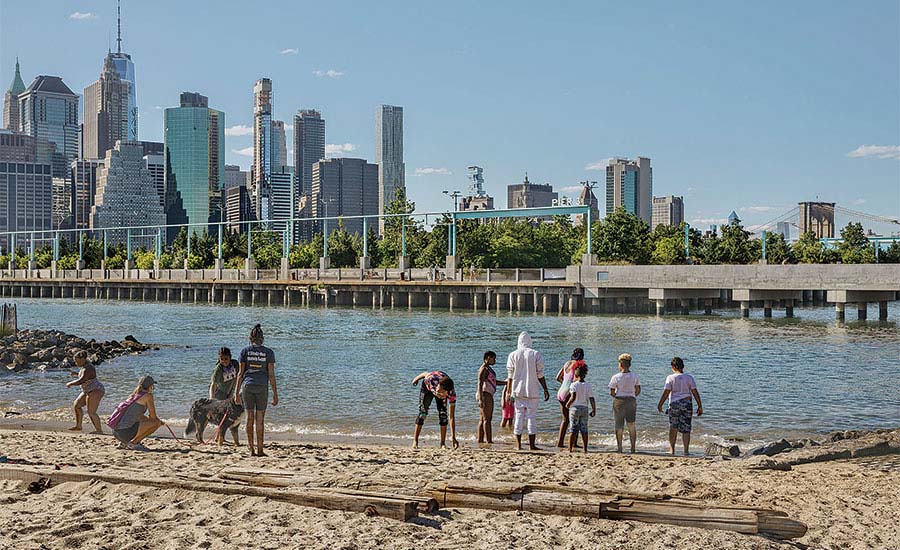 A sandy beach facing Pier 3 is a popular play spot. Steel framing from a former warehouse delineates the lush interior of the pier, and new concrete bridges connect it to the mainland. Photo © Elizabeth Felicella

In recent months, the park’s users have changed dramatically. Gone are the tourists, which usually make up about a third of visitors, and there are fewer New Yorkers from distant ends of the boroughs. But even during the lockdown, Pier 3’s—and the larger Brooklyn Bridge Park’s—mission to bring respite to the diverse city has not changed. “We’re all very different, and we’re not really all that very different,” says Van Valkenburgh. “We think we’re moving fast-forward on a rocket ship, which in many ways we are, but not experientially. Smelling a rose a hundred years ago affected my grandfather the same way it affects me. That’s what I love about landscape: its enduring quality, no matter what your background is.” 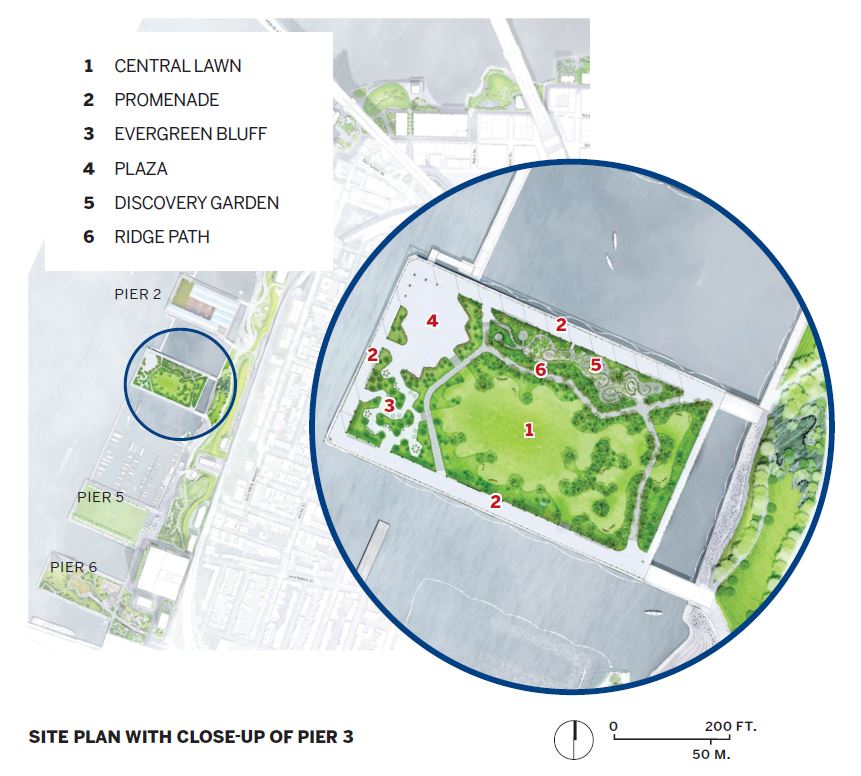