While Amazon was dominating the news with its search for a city to host a second headquarters a few years ago, the tech giant’s first purpose-built campus was taking shape in Seattle’s Denny Triangle neighborhood (also known as the Denny Regrade for the leveling of its eponymous hill more than 100 years ago). Completed last summer, the 3.3 million-square-foot complex, designed by the local office of NBBJ, spans three blocks with six distinct buildings activated by public paths, verdant plazas, ground-floor shops, dining venues—even dog parks. The result is a dynamic workplace for employees that integrates into its urban setting with engaging places for the community and passersby. 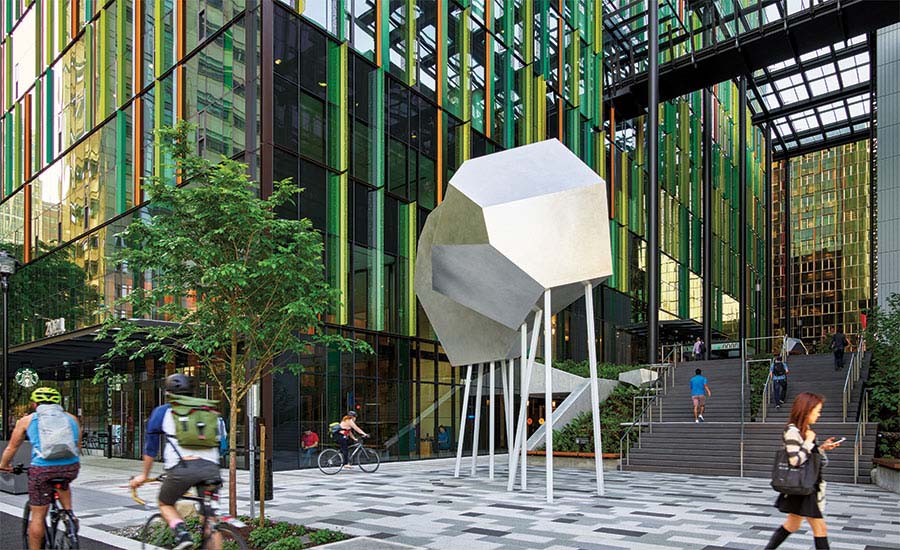 NBBJ-designed bike lanes on both sides of the street lead to a dedicated storage area, with lockers and showers, in each tower. Photo © Kevin Scott, click to enlarge.

The groundwork was laid in 2011 when Amazon vice president of real estate John Schoettler invited NBBJ to do a feasibility study for a facility somewhere in what was, at the time, a neglected 12- to 14-block area dominated by boarded-up movie theaters, cheap motels, and surface parking lots. The company had been renting space around town and was ready to expand with the kind of legacy project it couldn’t realize while leasing. The architects zeroed in on the triangular three-block site for its proximity to downtown businesses and existing Amazon locations. The zoning here would accommodate the company’s high-density requirements—with allowances for up to 500-foot-high structures—and the site was strategically positioned at a transportation hub, bisected by bike lanes, light-rail, streetcar, and bus lines, and close to major highways. So Amazon requested a master plan that allowed for phased construction and occupancy, says principal in charge John Savo.

The executives wanted to take advantage of being in the city, says Savo, “so they asked us to build a neighborhood, not a campus, with buildings that look different from each other” and connect to the urban fabric. Working with Seattle’s Design Review Board and its Design Commission, the architects developed a robust schematic design to demonstrate massing, materials, and programming, with two buildings on each 360-by-230-foot block: one 38-story tower and a low-rise ancillary structure, with through-block public space between them. The presentation emphasized the value of eliminating a zoning requirement for an alley on each block—typically used for trash pickup, loading docks, and garage access—to create pedestrian connections and open outdoor areas. By doing that, “we could rotate the towers to space them for views and to establish a sun pocket at the center of the three-block area,” says design principal Dale Alberda. Understanding the benefits, the city gave the go-ahead. It also approved the installation of operable windows—an Amazon must—at guardrail height, even in the towers. 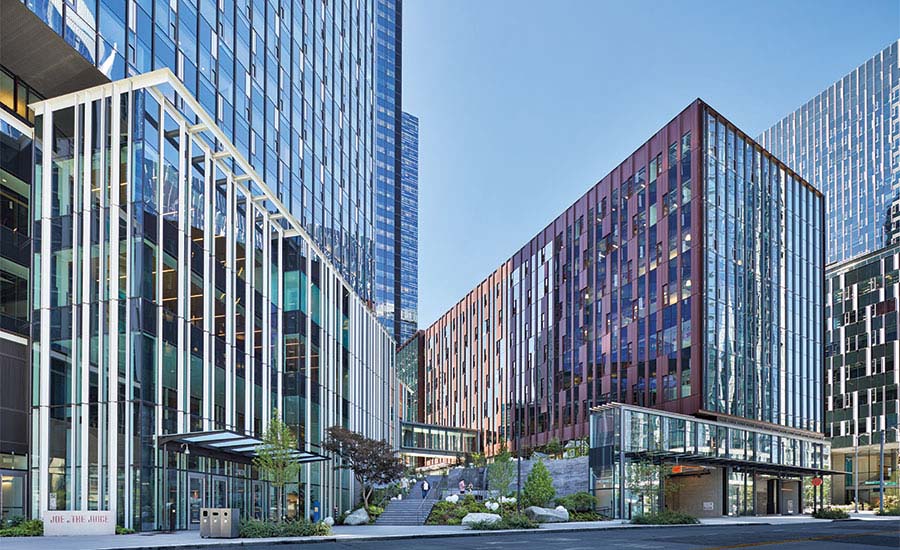 The project navigates elevation shifts with terraced grounds, like the landscaped stair between Tower 3 and a connected training center. Photo © Benjamin Benschneider

Construction began in 2014 and was sequenced from one block to the next. Each is differentiated by a unique grouping of glass and steel buildings with concrete shear cores and outdoor zones that flow easily across avenues from one to the next, facilitating employee—and pedestrian—movement among and through them. Seattle is a city of hills and, though this area had been regraded, the site’s elevation still shifts 15 to 17 feet on each block. The architects took advantage of the topography by establishing multistory podiums in the towers with access at the different levels and seven stories of below-grade parking. Then they varied the grounds with terraced spaces accessed via ramps, stairs, and entrances along the slope. All the buildings look outward and invite passersby and “Amazonians” to enter and visit the local retail and food businesses on the ground floors or to proceed up to the next level, via public elevator, escalator, or stair, where the general population can exit to the outdoors and employees can enter the workplace. 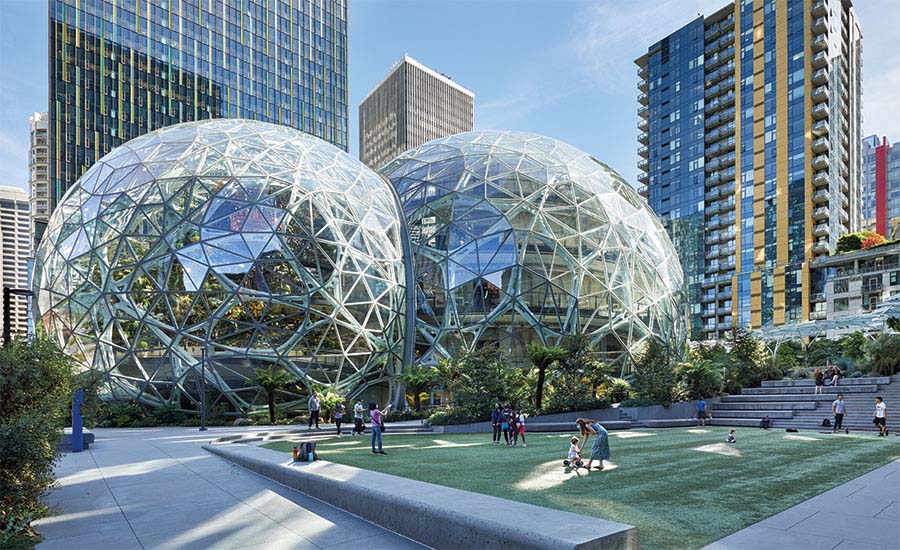 The popular central green (1) is flanked by the Spheres (2), a glowing biophilic space for employees, guests, and the public. Photos © Benjamin Benschneider (1), Sean Airhart (2) 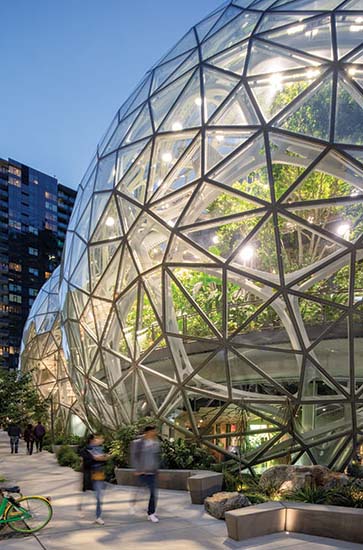 “The community expressed a desire to see color,” says Alberda, so the first completed tower is articulated by multihued aluminum fins. It connects via a footbridge to a five-story meeting center. A path, protected by an 85-foot-high glass roof, provides passage between streets. The second tower has graphic horizontal banding with vertical glass fins in blue and orange, and shares a grassy plaza, used for a farmers market, with the Spheres, a 60,000-square-foot greenhouse-like environment where Amazon employees and guests can work, eat, and relax surrounded by thousands of plants curated to thrive in people-friendly conditions. To the east, the third tower features copper- and rose-tinted bands, and sits on the diagonal amid arbors, fountains, and waterfalls. Its low-rise counterpart is accented with rust-colored ribbons of striated aluminum, and houses a daycare center on the ground floor, with flexible training areas above. 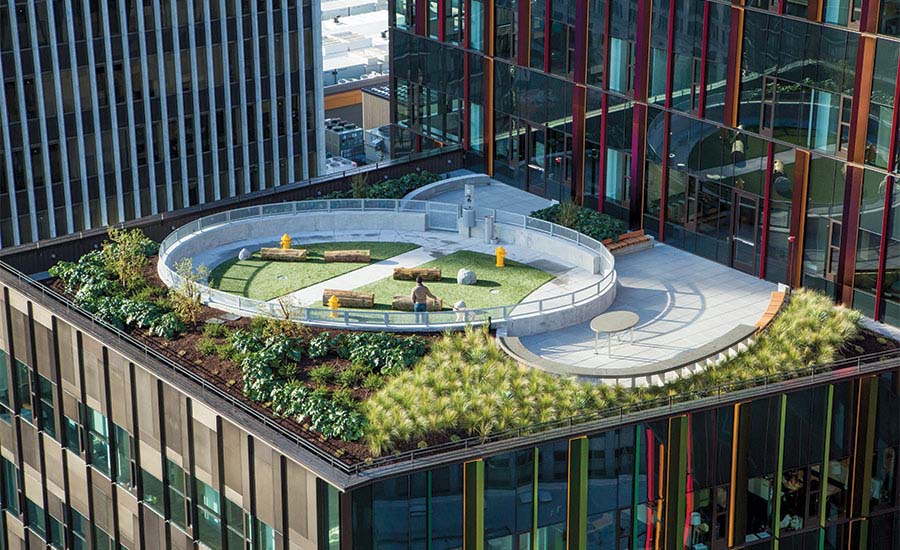 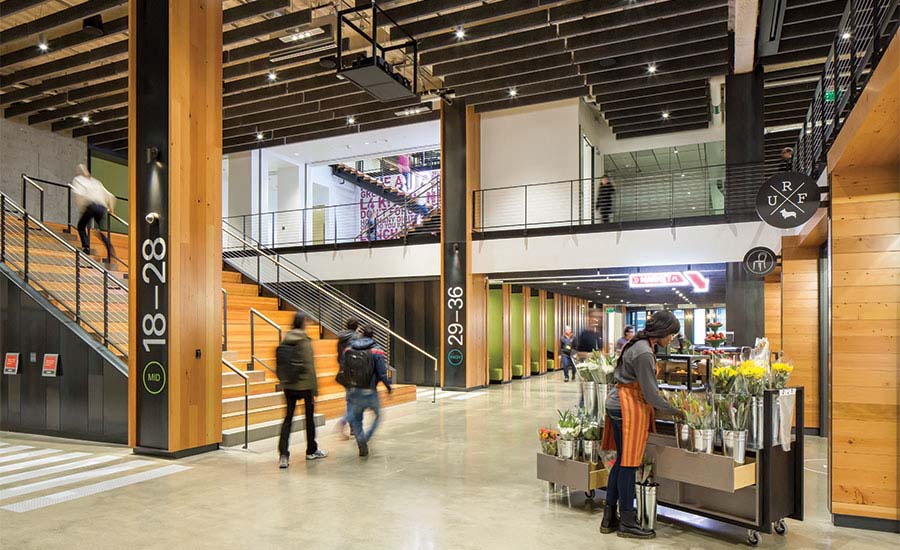 Amenities include community and company dog parks (the latter, 3) and Centers of Energy at the base of each tower where “Amazonians” can grab a coffee, convene in a booth, or even purchase flowers at a marketplace (4). Photos © Sean Airhart

In keeping with the informal vibe typical of tech culture, there are no lobbies. Instead, employees pass through what Amazon calls Centers of Energy (COE) before reaching the upper office floors. Located on the first four or five levels above grade, the COE have internal stairs to encourage walking, and offer markets, cafés, IT services, and casual spots to work or gather. According to Alberda, “Rather than dispersing amenities throughout each building, we concentrate them here to encourage employees to mix, talk, and share ideas.” There is one perk not located in the COE, however: dedicated bicycle parking in each tower, with lockers and showers. Due to the popularity of two-wheel commuting here, the NBBJ team developed tree-lined bike lanes on both sides of the project’s main downtown thoroughfare, which lead into these facilities. This pathway is now a municipal prototype, says Alberda. In another civic collaboration, the architects worked with the client, the city, and an adjacent data center (unrelated to Amazon) to implement district energy, whereby all of the buildings in this LEED Gold–certified project get hot water from the heat generated by the data center. 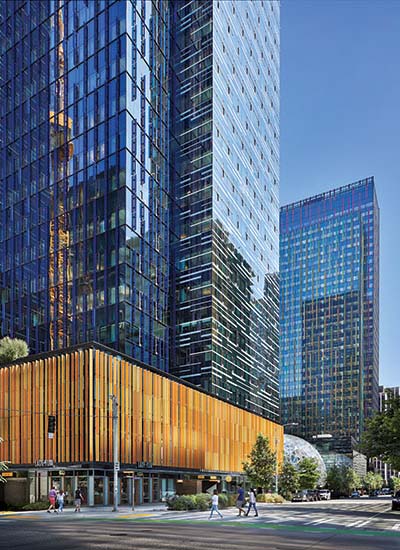 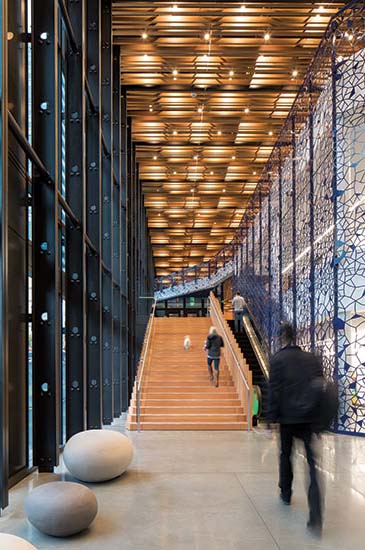 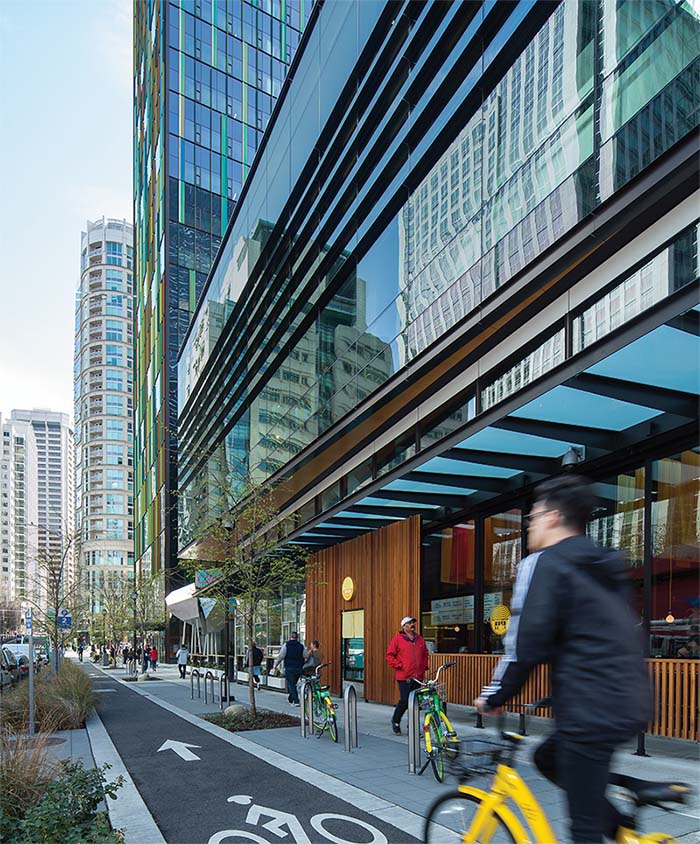 “This whole end of town has been stimulated by this development,” notes Alberda. “There was nothing beyond it when we began. Now there are young Amazon employees who want to live near their work, so developers are erecting high-rise apartment buildings as fast as they can.” And though the company helped overturn a tax to support the city’s growing homeless population a couple of years ago—a crisis critics attribute to Seattle’s corporate influx—there is a sign it’s addressing the problem. While Amazon did not respond to Record’s questions, a recent Associated Press report says that the company created a permanent facility for a local homeless shelter in its newest building (by Graphite Design Group), adjacent to this site.

“Placing its headquarters in downtown Seattle made a strong statement about wanting to be part of the community,” says Alberda. “And it has become a popular gathering place. On sunny days, before the pandemic-related shutdowns and quarantine, the central green was full of people all the way up the stairs, where they liked to sit and eat lunch. Hopefully, in the near future, that will happen again.” 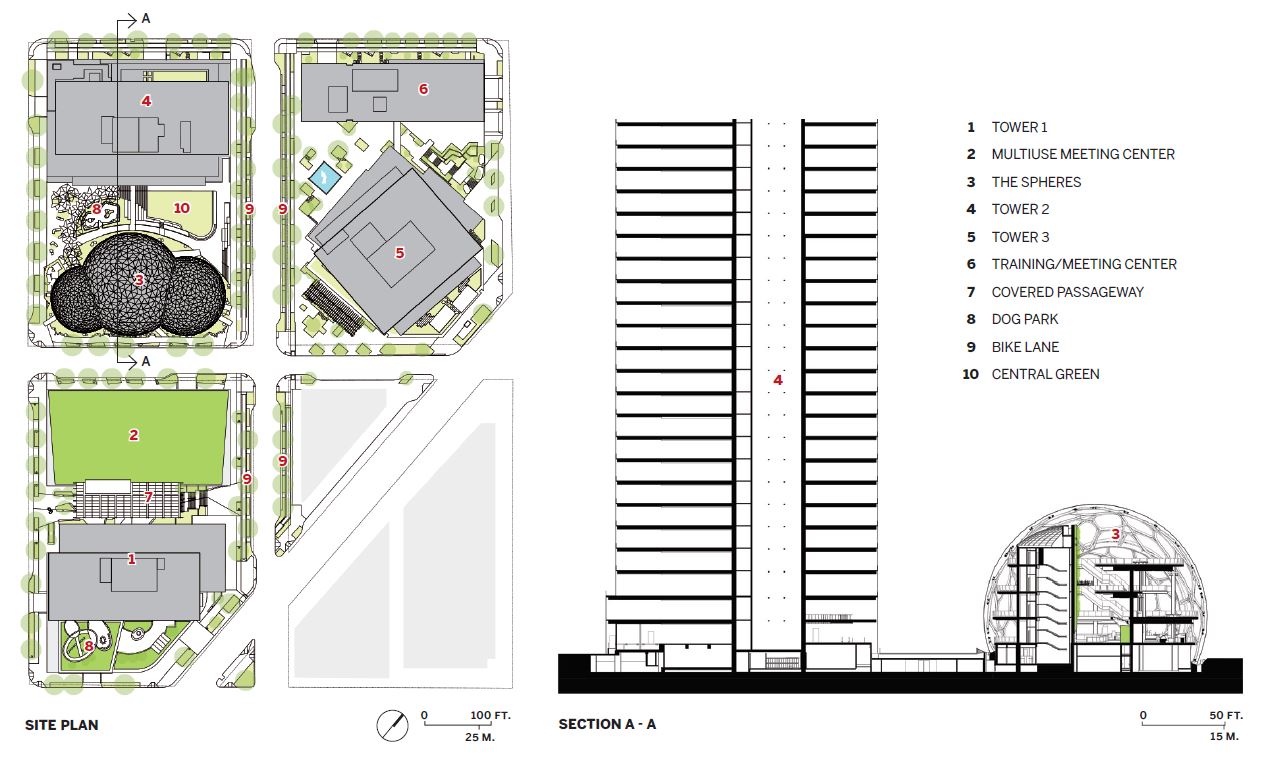