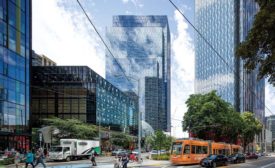 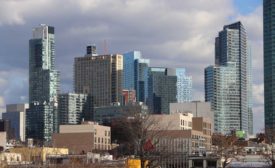 Long Island City in New York and National Landing near Alexandria, Virginia, will be the sites of Amazon’s sought-after second headquarters. 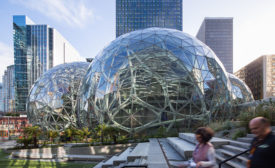 The three conjoined glass bubbles take biophilic design to the next level. 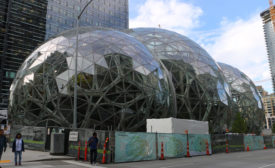 On the Ground with the Amazon Spheres in Seattle

A cluster of eye-catching glazed spheres is taking shape at the site of Amazon’s new corporate headquarters in Seattle.

Amazon's Seattle Headquarters Advances to the Next Round

Katharine Logan
No Comments
NBBJ’s design for Amazon’s new and massive Seattle headquarters was revealed in greater detail this month. Renderings of the project’s street level presence, unveiled in a meeting with the city’s Design Review Board (DRB) on August 14, show asymmetrical towers, mid-rise buildings of varying size, and mid-block open spaces, representing a scale of development unprecedented in Seattle’s history. The 3.3-million-square-foot project spanning three city blocks is on track to start construction next year. It will consolidate Amazon’s currently dispersed operations in leased buildings into an owner-developed campus between Seattle’s commercial core and the neighborhood of South Lake Union. The project’s
Read More
Subscription Center
More Videos