Just over 40 hours after the blast that ravaged Beirut’s port on August 4, 2020, and left the city core in apocalyptic doom, architect Lina Ghotmeh was back at Stone Garden—her recently completed project, the first in her native country—surveying its destruction, and discovering the city’s gutted structures and ruined harbor through its many windows, most of them shattered. 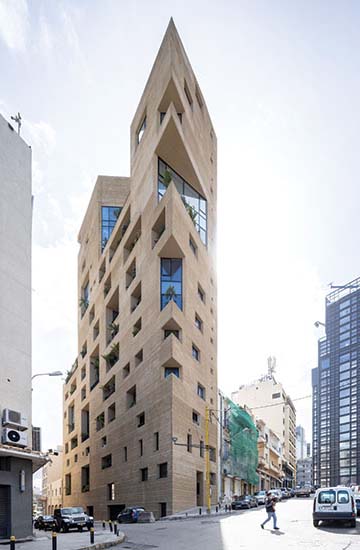 It was eerie: the dead fish on the sidewalk tossed from the sea 500 yards away, shredded stone-wool insulation blown by the blast and clinging to the building’s textured skin. Every glass, metal, and wood element in the building had been fractured, broken, or warped beyond functionality. “I had never thought we would be living through this disembowelment again. Is it a nightmare? It’s definitely quite schizophrenic,” said the Paris-based Ghotmeh.

Yet the building structure stood unscathed, towering at 165 feet among its much lower neighbors, a mix of five-story commercial buildings from the 1950s and ’60s and a few rundown 19th-century low-cost lodgings servicing the port.

Never had the architect’s design approach, her “archaeology of the future,” resonated so well. Stone Garden emerged as an echo of the years of civil war the city had been through, an architecture that is laid bare by its context, a shelter overtaken by nature and the vicissitudes of time. 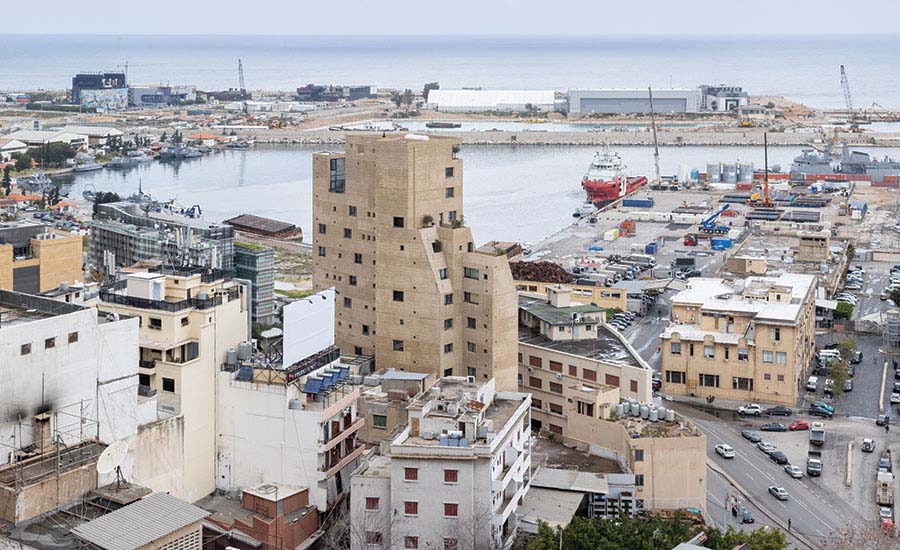 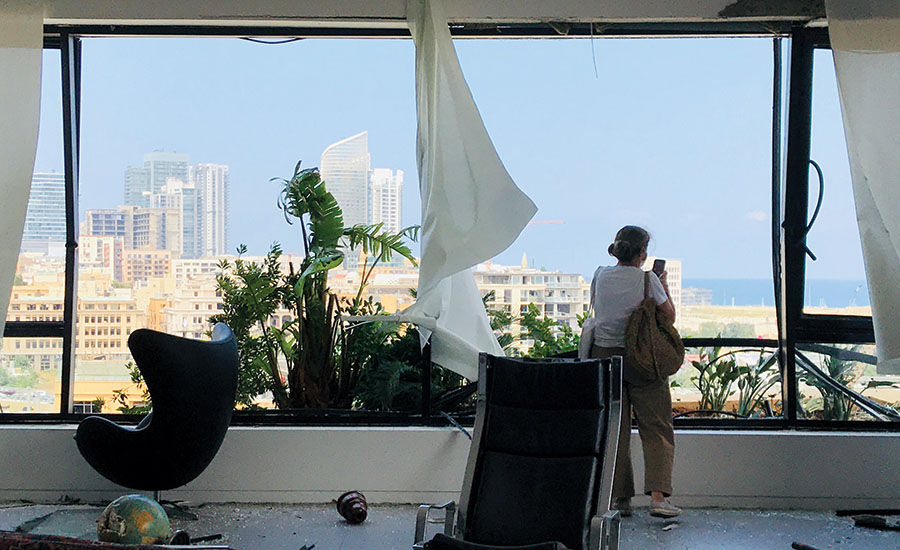 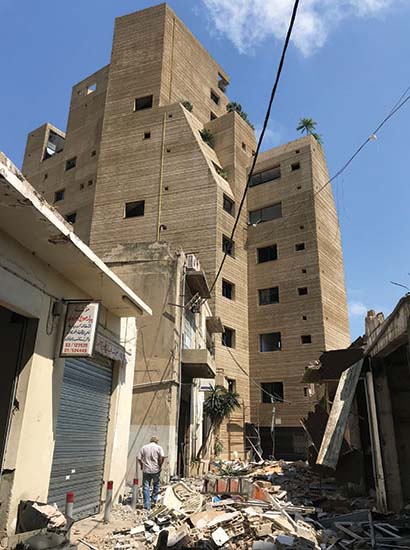 Stone Garden is approximately 1,500 feet from Beirut’s port, where the August blast occurred (1. Photo © Iwan Baan). The explosion blew out the building’s windows and surrounded it with rubble (2 & 3. Photos © Lina Ghotmeh).

Set at the foot of a hill, on an irregular 4,360-square-foot sloping parcel, the site was quite challenging, but Ghotmeh decided to let its boundaries determine the envelope. She wanted to “glue the form to its neighbors, inserting it discreetly into the cityscape.” It seemed absurd to build a stand-alone glass tower, like the new developer-commissioned buildings that have mushroomed in the last 30 years during the postwar reconstruction. 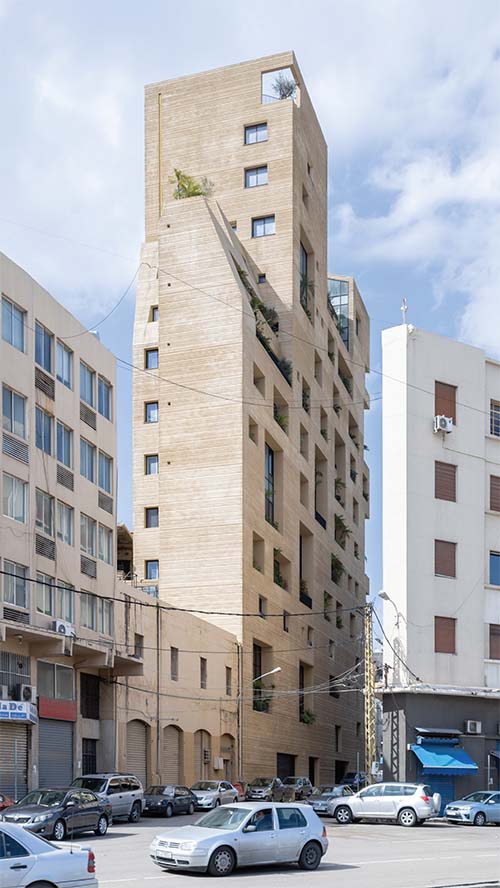 The building’s openings are variations on a 4-foot module. Photo © Iwan Baan

The client was different here; a photographer whose father had been one of the country’s most respected architects, he gave Ghotmeh leeway to hone her craft on the family-owned site. The new 13-story mixed-use project, housing an art foundation on two lower floors and 14 residential units above, would stand where his father’s office and his grandfather’s concrete factory had once been.

Ghotmeh let the building rise from the ground, textured much like the layered limestone strata of the Rawché Rocks, Beirut’s main natural attraction, two islands that stand scoured by the sea as eternal sentinels of the city. It is as if the tower had been unearthed, at this particular moment, with its conspicuous openings inviting us to wander through the building, without a clear path or narrative, to discover it the way we experience a ruin found in a ravaged landscape.

There is no legible hierarchy to the structure, there are no architectural signifiers on the limitless lines etched into the facade. One’s gaze travels endlessly along the sharp-angled vertical planes and the tilted bends at the top—a straightforward execution of setback requirements.

The 14-inch-thick envelope is load bearing, and the building was conceived as a sculpted block. Hollowed out spaces of various sizes serve as deep windows, loggias, or entrances. What seem to be random playful openings are actually variations on a 4-foot module, carefully scaled by Ghotmeh to echo a sniper’s aperture, a generic window, or a gaping hole from the past. She admits to “tracing” the existing context, then mnemonically transcribing it on her sculpture. Three window openings from the nondescript building that housed the architecture office are drawn at their original locations, in acknowledgment of the spirit of the place. Ghotmeh likes to flirt with imperfection, finding poetry in deadpan juxtapositions. “There was the setback line, and I needed a window there, so they just coexist,” she says, referring to an opening at the top. 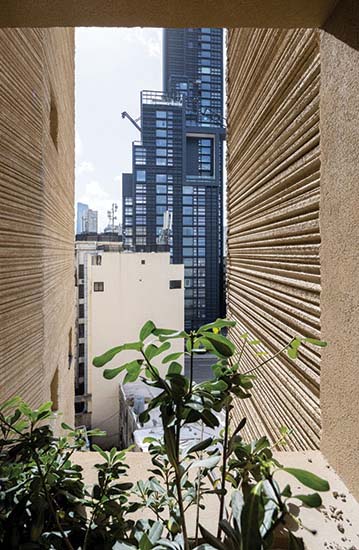 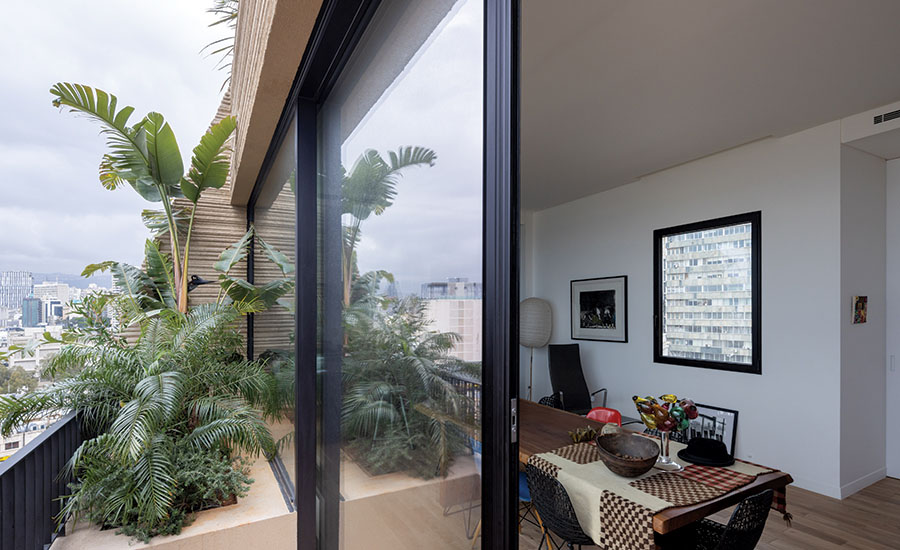 Many of the openings contain planters (3 & 4). Photos © Iwan Baan

At ground level, the earthy texture of the building’s skin is inviting; you touch the 2-inch-deep striated ridges applied to the surface of the structure as you would a sculpture or a body. It took two years of research and the dedicated collaboration of the builder and his team to deliver a seamless finish: a combination of mortar, pigmented cement, and gravel, which would be combed onto all 54,000 square feet of the envelope’s many facets. Ghotmeh designed the 10-foot-high steel scriber which was set on rails and used repeatedly to labor the layered mix by hand. 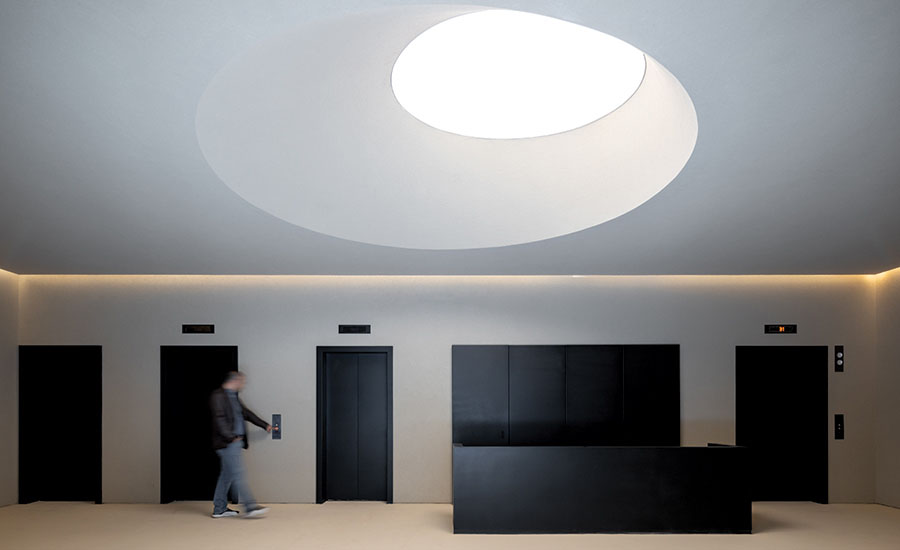 Inside, there is an economy of finishes and tones; walls, floors, and ceilings in the common areas are treated alike, with a combination of matte epoxy and textured plaster looking like adobe. Door and window frames are rendered flat, in a muted burnt earth tone. Fixtures are kept minimal and unseen, and light washes on walls indirectly or, at the entrance lobby, from an oculus overhead. Interior apartment layouts are differentiated, since living spaces are arranged around the different loggias or large window openings.

Nature has been given the upper hand; Mediterranean trees and shrubs planted by the architect in the various recesses have inhabited the structure from the outset. Still alive after the blast, the greenery remains in symbiosis with the building, part of its ethos, but residents will probably not move back in for some time now, given the extent of damage. 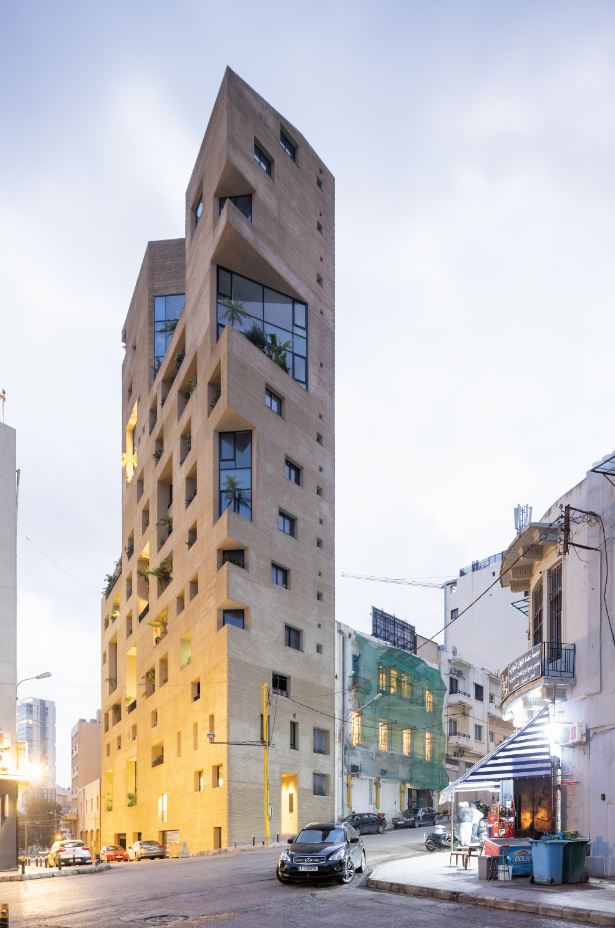 Much like architecture in capriccio paintings, the different lives of the building have been designed into it, to make an ageless place combining absence and presence simultaneously. Stone Garden is not a palimpsest of history but a new form that appears in the urban scape with an uncanny sense of having “been there.”

Ghotmeh is touched when people tell her that they had not noticed the new building. Designed with tact, respectful of its charged surroundings and the genetic footprint of the site, Stone Garden’s architecture remains bold enough to suggest a fresh morphology that is the poetic translation of Beirut in its actual state. 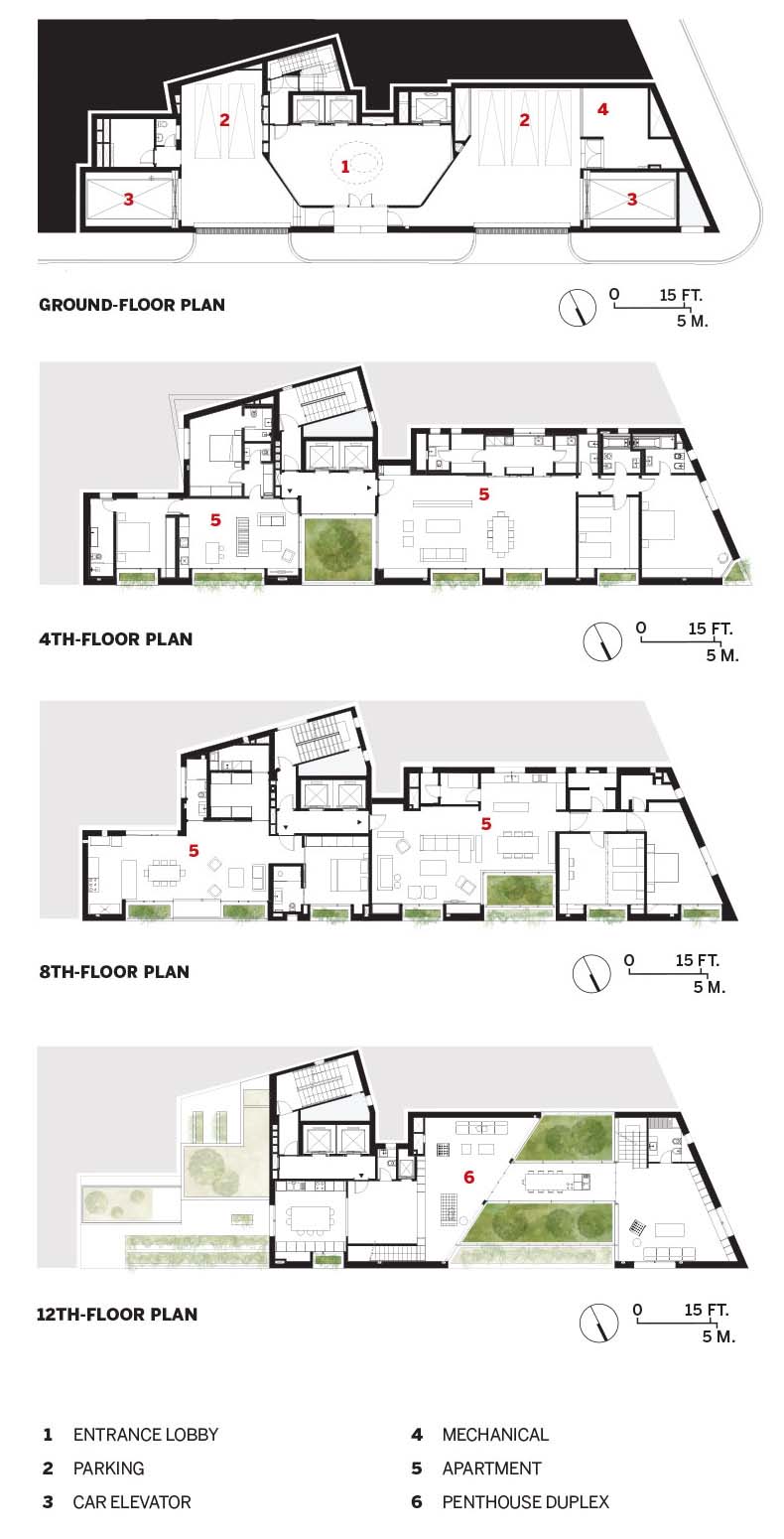 Joumana Ghandour Atallah is a graduate of the Harvard Graduate School of Design and a practicing architect in Beirut.